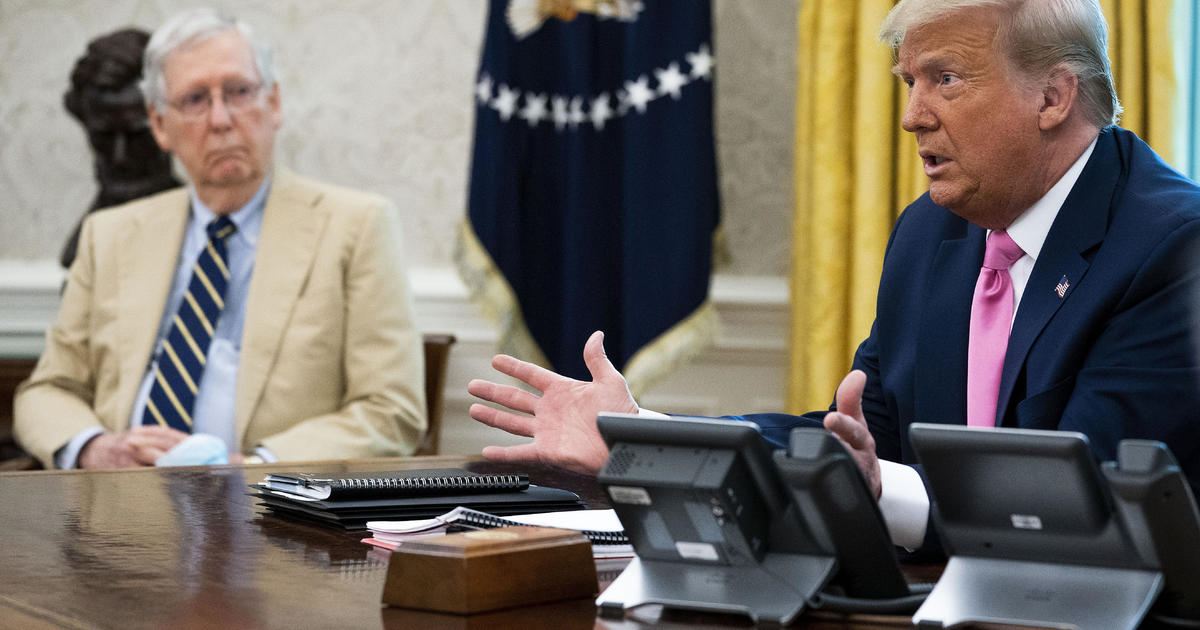 Washington — With the coronavirus crisis worsening in more than 40 states and the District of Columbia, President Trump and Republican leaders met Monday to outline their priorities for another federal relief package that is expected to carry a price tag of at least $1 trillion.

Mr. Trump gathered in the Oval Office on Monday with Vice President Mike Pence, Treasury Secretary Steven Mnuchin, Senate Majority Leader Mitch McConnell and House Minority Leader Kevin McCarthy to discuss the broad contours of a next legislative package, known as “phase 4” legislation, which they intend to discuss with GOP senators on Tuesday.

“Kids in school, jobs and health care is the theme of the proposal that we hope to come together and present to our Republicans,” McConnell, a Republican from Kentucky, told reporters.

Republicans plan to push for tax credits for personal protective equipment and that incentivize businesses to bring workers back, while extending a revised version of the enhanced unemployment benefits that are set to expire this month. The proposal also includes an injection of money to states for education to ensure schools can reopen safely, Mnuchin said. The next package is expected to include liability protections for schools, universities and businesses, a top priority for McConnell.

“We don’t need an epidemic of lawsuits on the heels of the pandemic we’re already struggling with,” McConnell said.

While GOP leaders did not mention the possibility of a payroll tax cut, Mr. Trump said the issue is “very important” to him.

“We’re working on it, and I don’t think there’s too much dispute as to the level of importance,” the president said, adding that a payroll tax cut is one of roughly 10 elements being discussed for the next relief bill.

Senate Majority Leader Mitch McConnell listens to President Trump talk to reporters while hosting Republican congressional leaders and members of his Cabinet in the Oval Office at the White House July 20, 2020.

Discussions between the Trump administration and Republican congressional leaders have been ongoing for the last two weeks. In addition to meeting with Senate Republicans on Tuesday to provide them with a full briefing on the next relief package, Mnuchin said administration officials are also going to begin reaching out to Democrats to begin negotiations.

“The focus is really about kids and jobs and vaccines,” he said, adding that the Trump administration’s goal is to have a vaccine developed for emergency use by the year’s end.

Lawmakers are returning to Washington this week after a two-week recess, and the next measure under consideration would be the fifth passed by Congress in response to the coronavirus crisis, a tally that includes a bill extending a program providing loans to small businesses. So far, lawmakers have approved more than $3 trillion in coronavirus relief through bills to provide direct payments to Americans, boost unemployment benefits and establish the small business loan program.

“We’ve spent an unprecedented amount of money,” Mnuchin said. “The good news is a lot of the $3 trillion we still have left to put in the economy and put back to work.”

In May, the Democrat-led House passed its own $3 trillion coronavirus relief bill, which provided federal aid to state and local governments, hazard pay for frontline workers, student debt forgiveness and boosted Medicaid and Medicare. The package, however, failed to gain traction in the GOP-led Senate, and the White House dismissed the measure as “unacceptable.”

While negotiations between congressional leaders and the Trump administration have yet to begin, Senate Minority Leader Chuck Schumer warned in a letter to his Democratic colleagues Monday that Senate Republicans “are drafting legislation that comes up short in a number of vital areas.”

Sticking points that he cited include extending the enhanced unemployment benefits of $600 per week that were included in an earlier relief bill, as well as over federal assistance for state and local governments, investments in communities of color hit hard by the coronavirus, and hazard pay.

“Democrats will need to fight hard for these important provisions,” Schumer, a Democrat from New York, wrote.

Mnuchin said in the Oval Office the Trump administration is committed to passing legislation that protects those who are unemployed before the end of the month and said its number one issue is to craft a “technical fix” for the benefits to ensure people are not paid more to stay at home than they would receive in wages.