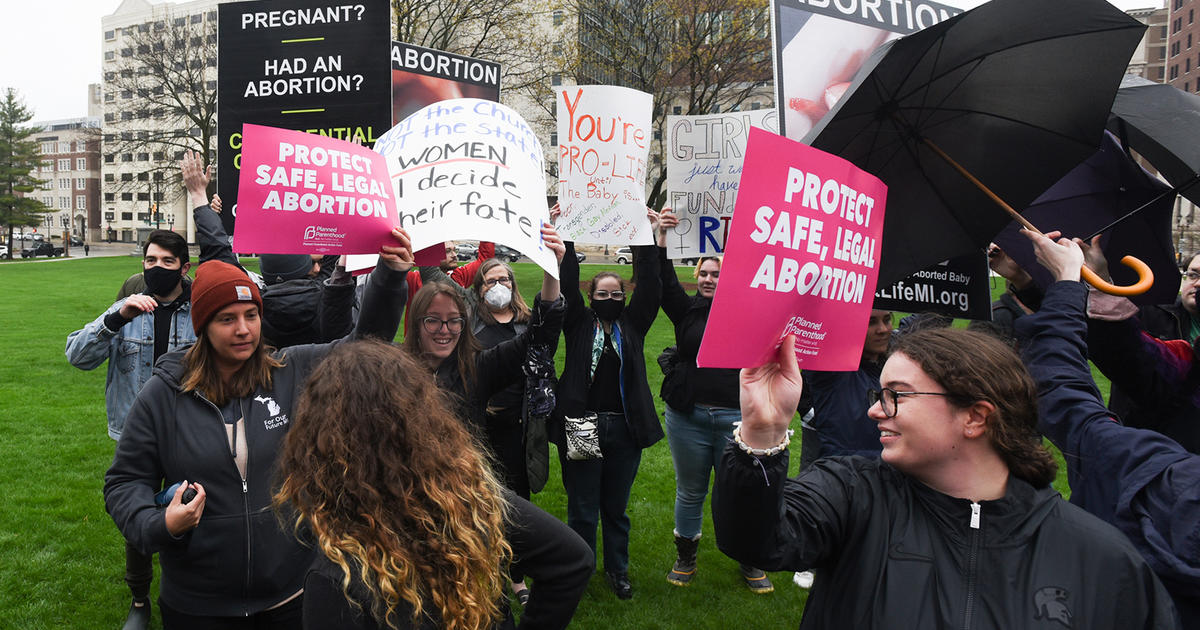 Democrats spending heavily on abortion leading up to midterm elections

Democrats are already spending big on advertising focused on abortion rights months before the midterm elections after the Supreme Court overturned the landmark Roe v. Wade decision earlier this year. And the Democrats’ victory in the special election Tuesday night in New York could further fuel their abortion messaging ahead of the November election. Some Republicans have now begun pushing back on this line of Democratic messaging.

Democrats have spent about $30 million on more than 100 television ads specifically mentioning abortion since the draft document of the Supreme Court decision in the Dobbs v. Jackson Women’s Health Organization leaked in early May. That’s according to tracking by AdImpact.

Democrats have also spent nearly $7 million on Facebook ads that including abortion in the text. Both party committees, Super PACs and candidates have all been putting their money on abortion as an election issue.

Earlier this month, Kansas voters turned out in droves — general election-level numbers — to defeat an amendment removing the constitutional right to an abortion in the state – signaling that abortion rights was an issue that motivated Americans to show up at the polls, even in a conservative state in a summer primary. But questions remained over whether abortion rights would galvanize voters to turn out for candidates, and not just when the abortion itself is on the ballot.

In New York’s 19th District up in the Hudson Valley, Democratic candidate Pat Ryan made abortion rights a central part of his campaign in the special election, which was the final test case for a swing district before voters head to the polls in November. This week, he ended up defeating Republican Marc Molinaro by about two percentage points.

“This was really a referendum on freedom in America and we sent a loud and clear message here that when people try to take away rights and freedoms we have fought and worked and rallied to secure, Americans will stand up and say that is not who we are as a country,” Ryan told CBS News after his victory. He said he believes the momentum will continue.

Even before the 19th-District win – Democrats were dropping large sums of money on abortions ads, and in the days since that victory, the messaging has only intensified.

In one of the most competitive House races this cycle, Virginia Democratic Congresswoman Abigail Spanberger dropped a new ad on Friday going after her Republican opponent on abortion, claiming, among other things, that Yesli Vega supports a total abortion ban. It was rushed into production after the New York special election.

On Wednesday, the Democratic Congressional Campaign Committee announced a six-figure ad buy targeting Latino voters in battleground districts highlighting Republicans’ role in restricting abortion. It’s part of a seven-figure buy the House campaign arm has been rolling out specifically focused on the issue with voters of color. There have also been ads aimed at AAPI and Black voters.

The Democratic Senate campaign arm also anticipates abortion rights will play a major role in all of the Senate battleground races. An official pointed out it is a clear way to contrast candidates in the race.

In the past week, Georgia governor candidate Stacey Abrams also launched a new TV ad attacking GOP governor Brian Kemp on abortion; Democratic Senator Catherine Cortez-Masto, who is up for reelection in Nevada, released an ad taking aim at her opponent, former Republican state Attorney General Adam Laxalt, using audio of him calling the Roe v. Wade decision a joke; and in Colorado, Senator Michael Bennet joined the growing crowd of Democrats running ads on abortion with the release of his own ad last week.

While Democrats have been spending tens of millions on abortion-related advertising, Republicans have spent just a fraction of that on the issue, neither touting the new Supreme Court conservative majority’s decision on Dobbs nor Republican action at the state level.

Republicans have spent just over $5.3 million on TV ads mentioning abortion since the Supreme Court draft decision on Roe v. Wade leaked in May. There has been less than $1 million spent on Facebook ads with abortion in the text. Part of that messaging has come from Republicans taking aim at fellow GOP candidates for not being conservative enough on abortion.

Heading into the general election season facing tough matchups, some Republicans appear to be dialing back their stances on abortion and others have kept their statements vague. But the pressure is mounting with several candidates feeling the need to directly respond to Democrats’ attacks.

In one of the more recent abortion-related ads released by a Republican, Washington Senate candidate Tiffany Smiley makes a direct appeal to camera after Democratic Senator Patty Murray released an ad slamming her over abortion.

Murray’s ad accuses Smiley of supporting the abortion ban in Texas and saying it would only take a single vote in Congress to “make abortion a crime.” In it a narrator says “oppose Tiffany Smiley before it’s too late.”

Smiley on Thursday released her own ad in response saying Murray has spent millions to paint her as an extremist.

“I’m pro-life, but I oppose a federal abortion ban,” Smiley says in it while looking into the camera. “Patty Murray wants to scare you, I want to serve you.” When Roe v. Wade was overturned, Smiley said it means people’s representatives will make the decisions on regulating abortion but she did not say what regulations she would like to see. She has, however, previously said she agrees with Texas’ near-total abortion ban.

On Thursday, Arizona Republican Senate candidate Blake Masters also went up with an ad on abortion – attempting to paint Democratic Senator Mark Kelly as the extreme one. Kelly had been running ads calling Masters too dangerous for Arizona.

“Look, I support a ban on very late-term and partial birth abortion, and most Americans agree with that,” Masters said. He has called the 1973 Roe v. Wade decision horrific and previously expressed support for a federal personhood amendment but has not been specific about a period of weeks after which abortion should be banned. NBC News first reported Thursday that his website was scrubbed of personhood law language.

Republicans are not just attempting to push back on abortion attacks in ads. While Cortez-Mastro is going after Laxalt in ads over abortion last week, he responded in a column meant to turn the tables. In it he reitrated abortion is settled law in Nevada. He also reconfirmed his support for a referendum further limiting abortion to 13 weeks in the state.

Recent polling has found abortion has grown in importance among issues Americans are looking at ahead of the midterms. The majority of Americans disapprove of Roe v. Wade being overturned and support abortion being legal in their states in all or most cases.

Britney Spears 'wants to be a good mum' to estranged sons, says ex-bodyguard »