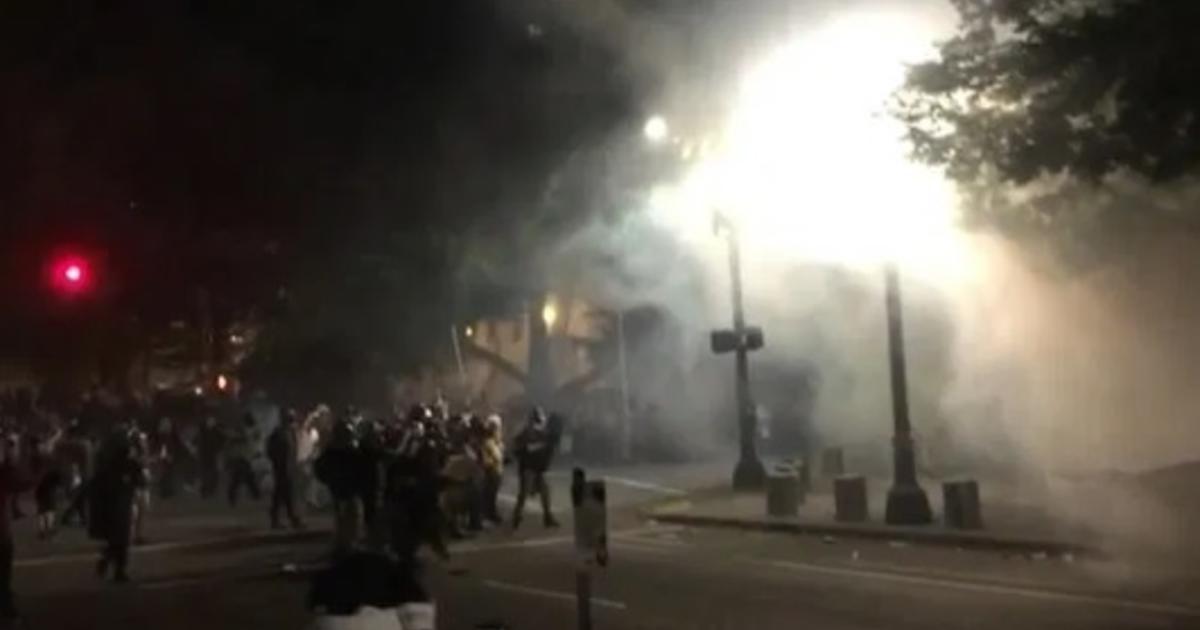 Protesters outside the federal courthouse in Portland, Oregon were targeted with tear gas by federal officers for the second night in a row Sunday, reports the CBS affiliate there, KOIN-TV. It marked the 52nd straight night of protests in the city against police violence and for racial justice.

Even after the tear gas was deployed, demonstrators regrouped outside the building in the early hours of Monday morning.

It wasn’t clear whether any protesters were arrested or detained.

KOIN reporters saw protesters, including a group of mothers wearing yellow and holding flowers, peacefully surround a fence at the Mark O. Hatfield Federal Courthouse after night fell. A few federal officers were spotted leaving the building, but staying behind the fence before going back inside.

By 11:40 p.m., parts of the fence were disassembled, and some protesters were sitting behind it.

Some ten minutes later, KOIN saw federal officers rushing out of the building and using a large amount of tear gas and in addition to other crowd-control munitions on protesters, many of whom had their hands up.

The scene outside the federal courthouse in Portland, Oregon late on night of July 19,2020.

On Saturday night, Portland police declared a riot after the police union building was broken into and a fire was lit. It was the 51st night of protests in Portland, where federal authorities have been sent in despite opposition from state and local officials.

Portland Police said in a statement on Sunday that they declared a riot “due to the violent conduct of the large group creating a grave risk of public alarm.” The crowd began to disperse as police issued a public service announcement.

Federal officers deployed tear gas once again on Saturday night as fencing was torn down around the federal courthouse, where officers and protesters have clashed before, CBS Portland affiliate KOIN reported. The fencing around the courthouse had come down Friday night, was repaired and replaced on Saturday and then torn down again.

Portland police said Sunday that four people were arrested for charges that included riot and interfering with a police officer.

Protests in Portland erupted in June after George Floyd’s death at the hands of police in Minneapolis — but lately, they’ve become about federal authorities’ presence in the city.

Under an executive order from President Trump in June, federal agents have been deployed to protect federal monuments and buildings in cities such as Portland, Seattle and others. The federal courthouse in Portland is also under their jurisdiction.

Protestors run as tear gas is deployed on the steps of the U.S. District Court building on July 17, 2020 in Portland, Oregon.

A report from Oregon Public Broadcasting earlier this week found that federal officials from a number of agencies have been driving around and detaining people. Personal accounts and video posted to social media show the federal officers detaining individuals without explanation, according to the OPB. One demonstrator, Mark Pettibone, told OPB he was “basically tossed” into a van and driven downtown without explanation.

Oregon Attorney General Ellen Rosenblum said Friday the state is filing a lawsuit against several federal agencies, including the Department of Homeland Security, for engaging in “unlawful law enforcement in violation of the civil rights” of protesters and detaining people without probable cause.

The New York Times reported on Saturday that a memo from the Department of Homeland Security, which has deployed officers to Portland, had warned the officers didn’t have proper training. In a statement on Friday, Customs and Border Patrol, a division of Homeland Security, said at least one of the arrests was made by their officers.

Oregon officials have been calling for federal authorities to leave, and on Saturday, Portland police told federal officials they could no longer use their command center. Homeland Security Secretary Chad Wolf, who visited Portland on Thursday, tweeted Sunday that not allowing their officers use the command center is “dangerous” and “puts lives at risk.”

Portland Mayor Ted Wheeler said on CNN’s “State of the Union” on Sunday that the presence of federal officers is “actually leading to more violence.”

“They are not wanted here, we have not asked them here, and in fact, we want them to leave,” Wheeler said.

Mr. Trump on Sunday tweeted that “we are trying to help Portland, not hurt it.”

“Their leadership has, for months, lost control of the anarchists and agitators,” he continued. “They are missing in action. We must protect Federal property, AND OUR PEOPLE. These were not merely protesters, these are the real deal!”

In an interview with Chris Wallace on Fox News on Sunday, Mr. Trump said “we’ve arrested many leaders” in Portland.

“If we didn’t take a stand right now, you would have a problem,” Mr. Trump said. “They’re going to lose Portland.”