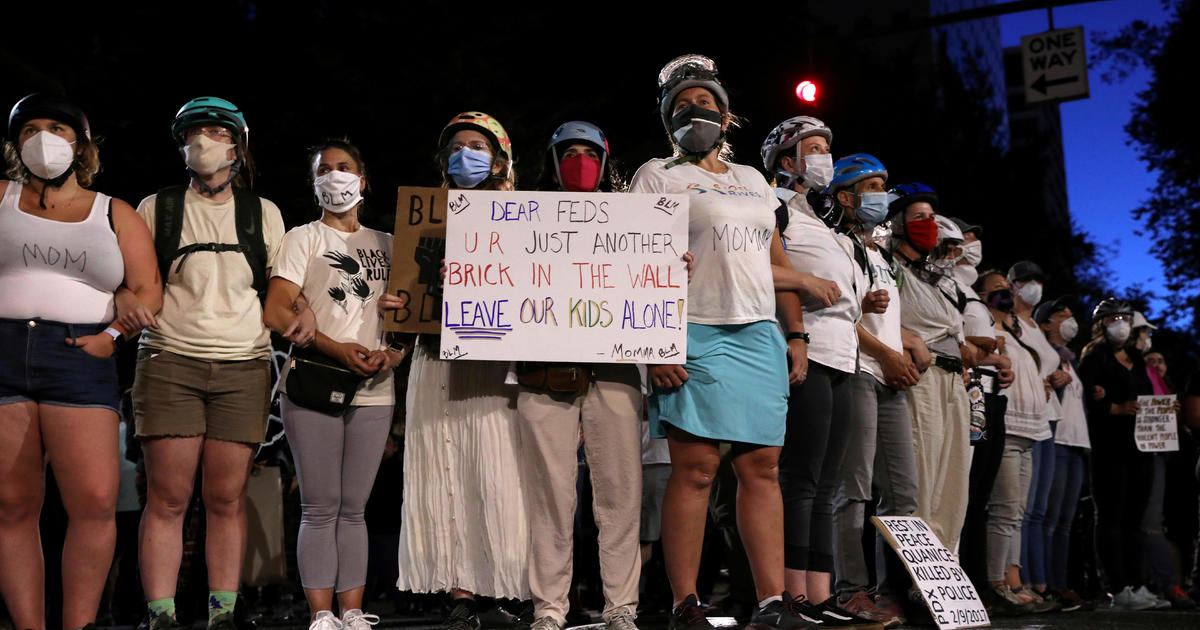 Women in Portland form “Wall of Moms” to protect protesters

A group of women banded together to form a human wall to protect protesters from federal officers in Portland over the weekend. There have been 52 days and nights of protests since the death of George Floyd in Minneapolis, which have turned violent after federal authorities have been sent in earlier this month.

After a Facebook post called for mothers to make a “Wall of Moms,” dozens wearing white and helmets attended Saturday. They stood arm-in-arm with each other, forming a barrier between federal agents and demonstrators. The gathering came after a report that federal officials from a number of agencies have been driving around and detaining people.

“We moms are often underestimated,” organizer Bev Barnum said in the event page. “But we’re stronger than we’re given credit for.”

This group, who says they’re moms against police brutality, is making a human barricade at 3rd & Main. pic.twitter.com/k5gJ8Tyt3c

Feds are out. They shoved the moms. Lots of tear gas and flash bangs. pic.twitter.com/gPsP6ZZnlo

One woman who participated with the moms called the actions of federal officers “terrifying.”

“We as a democracy – we need to stand up,” she told Reuters. “I’m 60 years old. I probably shouldn’t be here in public, but this is beyond acceptable.”

Videos of the event show them chanting, “The feds stay clear, the moms are here!”

Mothers in helmets stood arm-in-arm and formed a human wall to protect demonstrators in Portland from federal officers amid protests in the city https://t.co/YcKCawRemM pic.twitter.com/s6k1WwnJAT

Mothers also participated on Sunday, too, wearing yellow shirts and locking their arms together.

Mothers stand between federal law enforcement officers and protesters during a protest against racial inequality in Portland, Oregon on Sunday.

Although they campaigned against the use of tear gas, federal officers still deployed it on Saturday and Sunday, Portland police said.

President Trump signed an executive order in June, which deployed federal agents to protect federal monuments and buildings in cities such as Portland. The federal courthouse in Portland, where many of the protests have been held, is under their jurisdiction.

Portland Mayor Ted Wheeler, a Democrat, said on CNN’s “State of the Union” on Sunday that the presence of federal officers is “actually leading to more violence.”They are not wanted here, we have not asked them here, and in fact, we want them to leave,” Wheeler said.

Mr. Trump tweeted Sunday that his administration working to “help Portland, not hurt it.”

“Their leadership has, for months, lost control of the anarchists and agitators,” the president wrote. “They are missing in action. We must protect Federal property, AND OUR PEOPLE.”