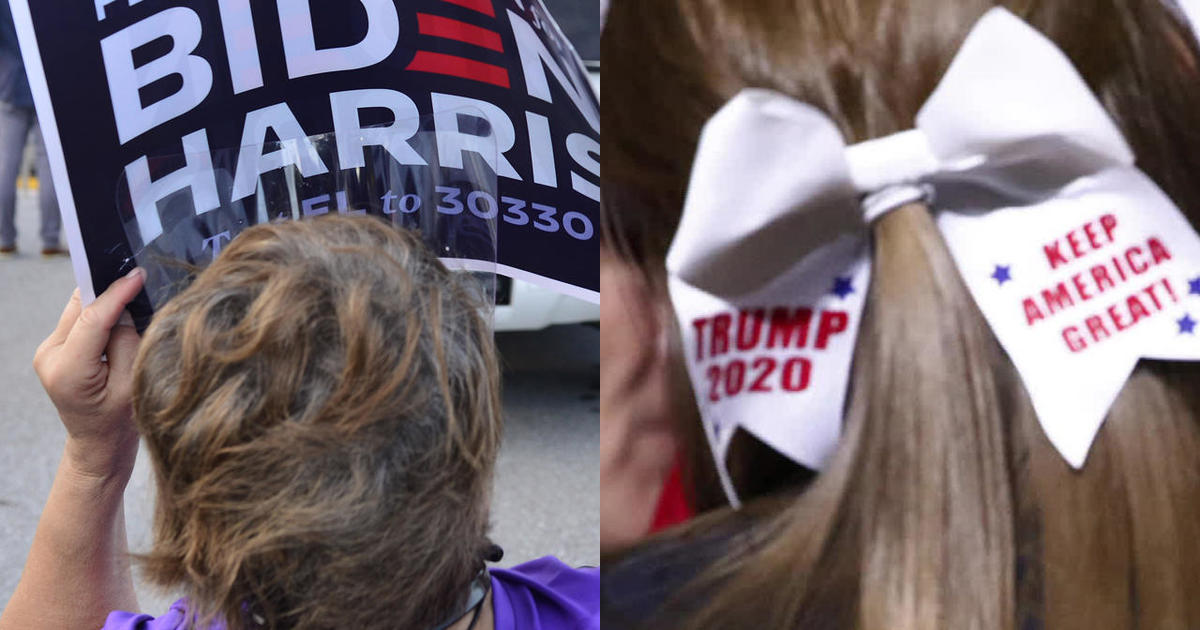 Winning the votes of suburban women in battleground states

In the 2020 election, it’s not really an issue of red and blue anymore – instead it comes down to pink.

Lauren Leader, co-founder and CEO of All In Together, a non-partisan voter education group, said, “Women voters have been driving the election outcomes for the better part of the last 30 years.”

And this year suburban women in battleground states comprise one of the most crucial voting blocs.

For decades women have been outvoting men – and this year women in battleground states are a key target for both the Trump and Biden campaigns.

For Kate Spittlemeister, the most important issue to her right now is Obamacare: “That’s been a lifeline for us.”

Atifa Robinson said, “What’s at stake for this election is racial equity, health equity, and social and economical equity.”

Patsy Crawford told Moriarty, “I believe under the Trump administration is gonna be the best future for our children, for our families.”

According to Leader, women on both ends of the political spectrum are unusually energized this year … a trend that has been building since 1980, when Ronald Reagan won the presidency. “Women have always been very committed to voting,” she said. “At least since 1980, they’ve been outvoting men. But I think this level of the sense ‘Our vote is fundamental to the future’ is new and different.

“You saw the sort of left-leaning feminist women who were entering the workforce, you know, those working girls with their shoulder pads,” Leader said. “And you saw huge numbers of women on the conservative end of the scale also come out.”

A generation later, it was White women who tipped the scales and helped put President Trump in office.

Patsy Crawford and Erica Rowland live in Wood County, Ohio, and both once voted for Barack Obama. But in 2016, they swung right for then-candidate Trump, just like their county itself.

Rowland said, “I realized that God and country is the most important thing about my kids’ future.”

Crawford said of Mr. Trump, “I believe he has been the most pro-life president yet.”

At the same time, a lot of other women, like Kate Spittlemeister, living in suburban Wisconsin, couldn’t bring themselves to vote for either major candidate in 2016. “A lot of us, myself included, thought, ‘There’s no way Trump is going to win,’ so we voted third party, which I did myself,” she said.

Leader told Moriarty, “And those votes in the battleground states, in Michigan and Wisconsin where the election was very tight, where the president won by just 11,000-12,000 votes, the votes of those women had a highly-outsized influence on the impact of the election.”

Suburban women in states like Ohio and Wisconsin could again prove pivotal in this election, especially White women without college degrees. So, neither President Trump nor former Vice President Joe Biden are taking them for granted. Both campaigns have launched an all-out assault of political advertising.

Erika Franklin Fowler, who heads the Wesleyan Media Project at Wesleyan University in Connecticut, said, “Trump has been sort of overwhelmingly focused in the summer on crime and public safety …”:

“… whereas Biden has been much more heavily focused on, sort of, core issues of healthcare and COVID response.”

But in today’s suburbs, one political message may not fit all.

Moriarty asked, “Does a campaign take a risk by reducing them to simple descriptions, like soccer moms, security moms, suburban mothers?”

“I think any time you try to take any one demographic and fit them into a neat, little box, there is a danger for backlash,” Franklin Fowler replied.

This past summer President Trump was sharply criticized by some on social media for tweets referring to “Suburban Housewives of America.” And an ad produced by a pro-Trump group seemed to be designed to stoke fear:

But Kate Spittlemeister, who lives in Kenosha, Wis., the site of violent protests this summer, sees the unrest in a different light: “In our neighborhood there were armed people, just regular citizens, and those armed citizens stood at the entrances to our subdivisions,” she said. “And that was way more terrifying to me than what was happening, you know, downtown.”

Atifa Robinson, who also lives in a Kenosha suburb, said, “Those ads just encourage people to create a divide between our communities. And what I’ve learned is, if we sit down and talk about the situation, what we have is a common ground, is that we do want to see change.”

Both Karen Watkins and Patsy Crawford, living in Ohio suburbs, came to the U.S. as children. Crawford, a Brazilian immigrant, supports the president’s wall: “I’m all about doing it the right way. I mean, we had to follow the laws and go through the naturalization process.”

But Watkins, whose mom is Japanese, thinks the country should be more welcoming: “I believe that anybody who wants to come here, you know, should have the same opportunities. They spend the money in our economy, and they contribute to society and our country.”

So, Moriarty asked, “Are there any undecided voters anymore?”

“Not many,” replied Leader. “Lots and lots of pollsters have said the numbers of undecided in this election are really very minimal.”

And with only 16 days until the election, most voters are so entrenched that no ad, news event or even scandal is likely to change their minds.

Moriarty asked, “Donald Trump said prior to being elected that he could shoot someone on Fifth Avenue and people would still vote for him. Is there anything that the President could do that would make you change the vote before this election?”

“That would do it!” Rowland replied.

Still, in the end, if the election is tight, an ad that doesn’t win new hearts may still be successful if it enflames hearts already won.

According to Leader, “Turnout is everything. And it’s especially everything in those all-important battleground states, where it does often come down to just a few thousand votes.”