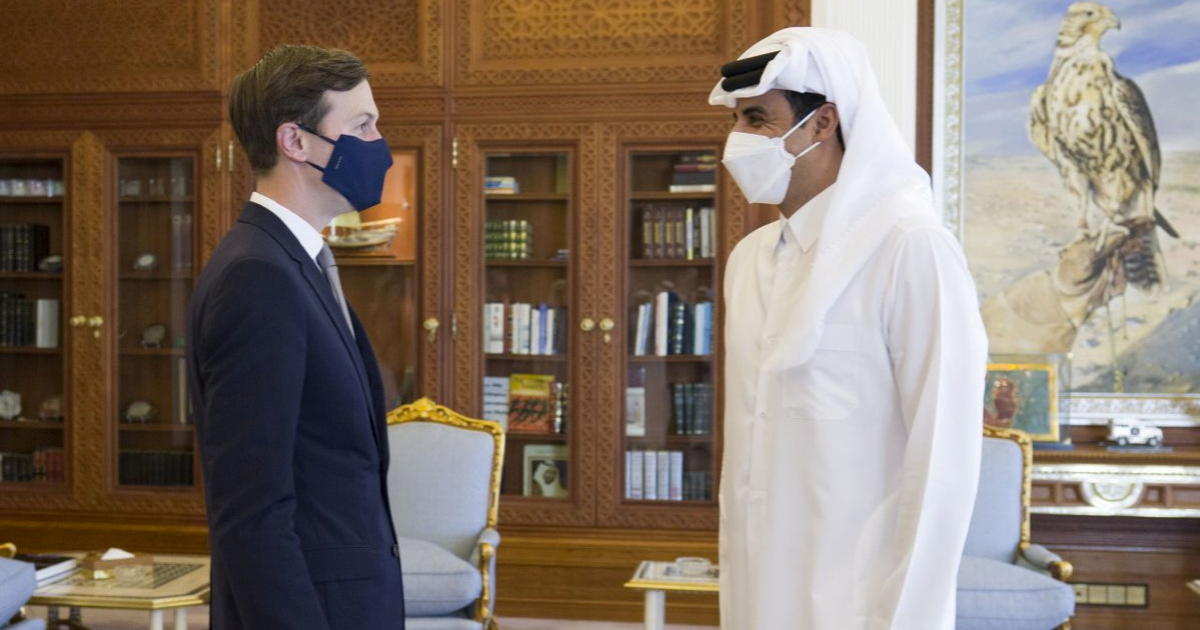 Will a looming deal fix “cracks” in the “wall of opposition” to Iran?

Concerted efforts to end a three-year standoff between major American allies in the Persian Gulf may soon pay off with an agreement that will ease U.S. concerns about emboldening Iran and straining a regional “wall of opposition” to the U.S. foe. There’s little hope, however, for a full resolution of the crisis that has seen Qatar, a key ally that hosts thousands of American forces, blockaded by its neighbors Saudi Arabia, the United Arab Emirates, Bahrain and Egypt.

President Donald Trump’s son-in-law and senior adviser Jared Kushner, along with Secretary of State Mike Pompeo and a cadre of other State Department officials, have paid multiple visits to the region to push for an end to the Saudi-led blockade.

The standoff and the blockade began in 2017 with accusations from Qatar’s neighbors that the tiny — but wealthy and strategically important — nation was fostering ties too close to Iran. The Saudis and their allies also accuse Qatar of supporting Islamic extremists, which Doha firmly denies.

As a result of the Saudi-led blockade, Qatar Airways has been forced to divert most of its flights over Iranian airspace. The Trump administration hopes the reconciliation process will at least allow the airline to resume use of Saudi airspace, and thus deprive Iran of hundreds of millions of dollars in “overflight” fees the Qataris have been paying to Tehran.

Qatar’s sprawling Al-Udeid Air Base is home to the forward headquarters of the U.S. military’s Central Command (CentCom), hosting more than 10,000 American troops. It’s a nerve center from which the U.S. government has long projected its military power across the Middle East.

The rift between the U.S. allies, “opens up cracks in what is otherwise a pretty strong wall of opposition to Iran’s destabilizing activities in the region,” Timothy Landmarking, U.S. Deputy Assistant Secretary of State for Arabian Gulf Affairs, told journalists in the region last week.

He said on the telephone conference that he hoped the crisis would soon be resolved, “as the rift only gets worse the longer it goes on.” He stressed, however, that “at the end of the day, the parties will have to figure out their own way forward.”

A deal is “close”

Saudi Foreign Minister Prince Faisal bin Farhan Al Saud said last week that the parties were “close to finalizing an agreement,” noting “significant progress in the last few days thanks to the continuing efforts of Kuwait, but also thanks to strong support from President Trump.”

Kuwait played a key role in getting the feuding parties to talk, and its new Emir, Sheikh Nawaf al-Ahmad al-Sabah, welcomed the as-yet-unofficial agreement.

“This agreement has shown that all concerned parties are keen on retaining the pan-Gulf and the pan-Arab solidarity, unity, and stability,” Kuwait’s official news agency quoted him as saying

That unity has been severely tested since the diplomatic, trade and travel embargo was imposed on Qatar. The boycotting countries, led by Saudi Arabia, served Doha a 13-point list of demands to have the restrictions lifted. Those demands included the closing of Qatar’s controversial Al Jazeera television network, which has often criticized Arab nations’ rulers and policies, and the severing of links with the powerful Muslim Brotherhood. Qatar was also told to downgrade its relationship with Iran, with whom it shares a major natural gas field.

Doha has rejected all of those key demands for three years.

Qatar’s young ruler, Sheikh Tamim bin Hamad al-Thani, told CBS’ “60 Minutes” after the boycott was announced that, “when those countries, our brothers, blocked everything — blocked medicine, blocked food — the only way for us to provide food and medicine for our people was through Iran.”

“We do not support terrorism,” al-Thani insisted, rejecting the allegations against his country and arguing that the demands issued by his neighbors undermined its sovereignty.

Qatar was controversially selected to host the 2022 FIFA World Cup. Despite the embargo and fears over the COVID-19 pandemic, “World Cup preparations remain on track, with 90% of infrastructure projects completed,” Hassan Al Thawadi, Secretary General of Qatar’s World Cup organizing body said in a recent statement.

The new FIFA World Cup stadium located in Al Rayyan, Doha, Qatar, which will be inaugurated on Qatar National Day, December 18, 2020, is seen in a handout photo provided by the Supreme Committee for Delivery & Legacy of FIFA World Cup Qatar 2022.

On December 18, the forth of eight new stadiums will be inaugurated in Doha, coinciding with the country’s national day. “We look forward to unveiling more stadiums next year,” Al Thawadi said.

“I don’t think that the effects of the blockade on Qatar have been substantial from day one when it comes to the economy,” Dr. Majed Al-Ansari, a former Qatari diplomat and President of the Qatar International Academy for Security Studies, told CBS News. “Qatar’s economy is dependent mainly on its exports of energy products, and that has not been affected to any extent by the blockade.”

So while the expected agreement may deprive Iran of some vital funding and help the U.S. increase regional pressure on the Islamic Republic, Qatar may be in no rush to make significant concessions to heal the wider rift with its neighbors, at least for now.

“Probably what we will get is an arrangement that will guarantee the minimum level of agreement over issues of dispute, and a mechanism of continuing relations between these countries,” predicted Al-Ansari. “Any reconciliation, I think, that would bring these countries back to be regional allies, is out of the question at the moment.”

Read More: Will a looming deal fix “cracks” in the “wall of opposition” to Iran?

« Pfizer vaccine distribution gets underway in the United States