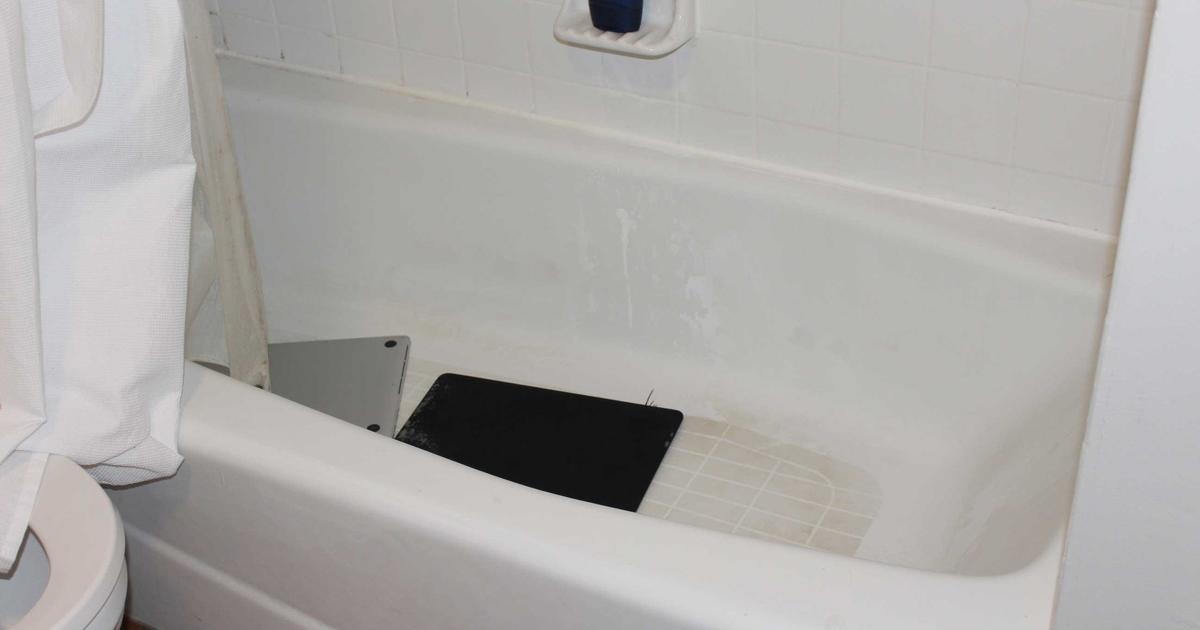 Why was the laptop in the tub? Odd clue in polarizing murder case

Nicole Addimando has never denied shooting her boyfriend Chris Grover. She admits to pulling the trigger, but told police she did it in self-defense because she was afraid for her life. She alleges that Grover had been physically and sexually abusive for years and was threatening to kill her when she shot him.

“It’s … obviously self-defense, right?” Addimando asked investigators as she was questioned the night of the shooting. Instead, Addimando was charged with second-degree murder in Grover’s death.

At Nicole Addimando’s trial, defense attorneys presented photos of injuries she’d sustained over the years, arguing that Chris Grover had caused these injuries. Prosecutors said the injuries could have been unrelated or self-inflicted.

“He started telling me that he could kill me in my sleep,” she said. “I thought he was going to kill me.”

“I don’t believe Chris ever abused her,” says Putnam County Assistant District Attorney Chana Krauss. Krauss, who has spent much of her career advocating for victims of sexual violence, prosecuted the case and says the way Grover was shot didn’t match Addimando’s description of what happened. “She intentionally planned and murdered him when he was sleeping.”

But family and friends of Chris Grover insist he was a good man and father to the couple’s two young children. They did not believe he was capable of such harm and neither did prosecutor Chana Krauss. Krauss spent much of her career advocating for victims of sexual violence.

“48 Hours” contributor Jericka Duncan presents the evidence in “The Case Against Nicole Addimando,” airing Saturday, November 21 at 10/9c on CBS.

After the shooting, friends and family were quick to rally around Addimando. Witnesses testified to seeing her bruises, adding she often wore long sleeves and scarves in the summer. Some said she told them the name of her abuser: Chris Grover.

There were hospital records, photographs, midwife reports, therapy notes, and an email from a police officer expressing high-level concern. In many of those documents, she also named her abuser: Chris Grover. A child psychologist working with the couple’s two young children said the children showed signs of having witnessed their father abuse their mother.

Most domestic violence victims, notes Rachel Louise Snyder, do not have this much evidence.

“And victims are … so often not believed,” says Snyder, author of “No Visible Bruises.”

“I think Nikki was manipulating everybody around her,” says prosecutor Chana Krauss.

Krauss says the evidence in this case tells a clear story. She told the jury Addimando had a history of making abuse allegations, and that in addition to her allegations against Chris, she had previously accused a maintenance worker and a married police officer of abusing her.

This went to her credibility, says Krauss, who argued that Addimando’s accusations were inconsistent and false.

“Pretty early on in the investigation, her allegations were falling apart,” Krauss told “48 Hours.”

Officers found a laptop in the bathtub of the couple’s apartment. Defense attorneys argued that Chris Grover broke the laptop and submerged it, perhaps to destroy evidence. The laptop was recovered and no evidence of abuse was found.

Krauss points to evidence from the crime scene as proof of Addimando’s deceit. At the scene Grover’s laptop was found in water in the tub, and his camera on the floor. Addimando’s attorneys suggested Grover may have placed the laptop in the tub and thrown the camera for the same reason: to destroy evidence that he had been sexually abusing Addimando and taping it.

“She claimed that, in this camera, there would be evidence of the allegation of abuse,” says Krauss. “We recovered that camera … there were nothing but family pictures.” No evidence of abuse was found on the recovered laptop, either.

Why, asked Krauss, would Grover try to destroy devices that had nothing on them?

“I think,” Krauss says, “she tried to create a crime scene to make it look like he had something to hide.”

The prosecution also pointed to the gunshot wound as proof of intentional murder. The wound to Grover’s head suggests that the gun was pressed directly against his skin. Though the medical examiner testified that it’s impossible to prove he was sleeping, Krauss believes he was.

Addimando’s supporters were heartbroken to see her in custody and held rallies and fundraisers for her defense. Grover’s friends and family grieved too.

Addimando testified in her own defense, and she acknowledged the love people feel towards Grover. “The same thing everyone in this courtroom misses about him, I loved too,” she told the jury. “He was a great father… But he was different behind closed doors.”

The jury found her guilty of criminal possession of a weapon and second-degree murder.

Addimando was sentenced to 19 years to life in prison. At her sentencing, Addimando made a chilling statement.

“This is why women don’t leave,” she told the court. “They so often end up dead or where I’m standing, alive, but still not free.”

Read More: Why was the laptop in the tub? Odd clue in polarizing murder case

« The Case Against Nicole Addimando

World Of Warcraft: Shadowlands Players Are Being Zombified At Character Creation Before Even Getting To Play »