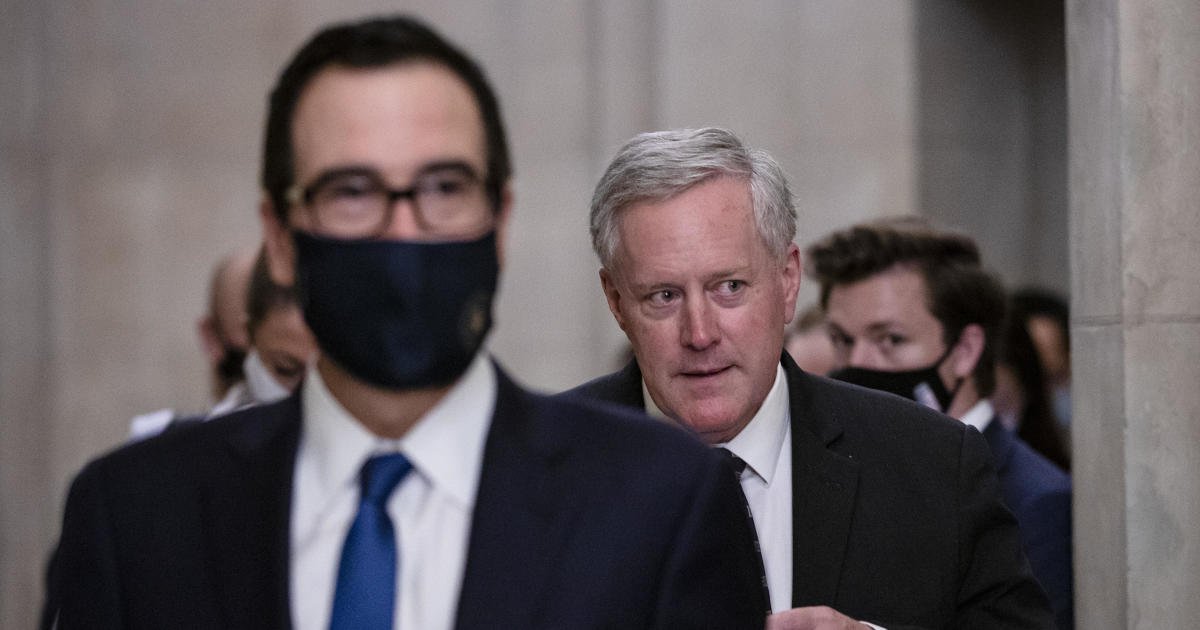 Washington — The White House is not expecting negotiations to resume over a coronavirus relief bill with congressional Democrats this week, a senior administration official tells CBS News, as the two sides remain at an impasse over the size and scope of another aid package.

President Trump took executive action related to unemployment relief and payroll tax cuts after talks between White House officials and Democrats failed last week, although it is unclear when they will be implemented or whether the orders will be challenged in court.

White House officials don’t believe renewed talks about additional legislation would result in significant movement at this point, as the two sides remain about a $1 trillion apart in their priorities. However, Mr. Trump has expressed a willingness to engage with House Speaker Nancy Pelosi and Senate Minority Leader Chuck Schumer, tweeting on Monday that the leaders “know my phone number” if they “want to make a deal.”

Senate Majority Leader Mitch McConnell told reporters on Tuesday that he and other Republican senators had spoken to Mnuchin and Meadows on the phone that morning.

“I just got off an hour conference call with my members with Secretary Mnuchin and the president’s chief of staff,” McConnell said. “We’re waiting for the Democrats to indicate some interest in getting an outcome.”

House Democrats passed a $3.4 trillion bill in May addressing many of the issues currently being discussed, including the expiration of enhanced unemployment benefits. Senate Republicans introduced their own proposal last month with a price tag of roughly $1 trillion.

Pelosi and Schumer last week offered to lower their proposal by $1 trillion if Republicans would raise theirs by $1 trillion, but their $2 trillion compromise offered by Democrats was repeatedly rebuffed by White House chief of staff Mark Meadows and Treasury Secretary Steven Mnuchin, who have led negotiations for the administration.

Schumer has criticized Meadows, previously a member of the conservative House Freedom Caucus, saying on Friday that his “positions are quite hardened and non-compromising, more so than Mnuchin.”

The senior official said the White House feels the president’s executive actions over the weekend gave them the ability to argue that the administration is providing economic relief to Americans while Democrats fail to act. The administration argues the orders bought time, and the pressure to make concessions is now on the Democrats, who counter that they passed their own proposal months ago, and Republicans refused to engage.

Mr. Trump signed an executive order and three memoranda on Saturday which, if implemented, would provide $400 in added unemployment benefits for those out of work because of the pandemic, and defer payroll taxes for those earning less than $100,000 a year. Unemployed workers had been receiving a supplement of $600, a benefit that expired last month.

States are expected to cover $100, or 25%, of the cost of the additional unemployment benefits, although it’s unclear which states will participate and how long it will take to implement such a plan. “If they don’t, they don’t. It’s up to them,” Mr. Trump said about governors. On Monday, he floated the idea of waiving the requirement that states chip in 25% of the aid on a state-by-state basis.

Mnuchin told reporters on Monday that he believed governors would be able to begin offering the enhanced unemployment benefit this month.

“I think within the next week or two most of the states will be able to execute,” Mnuchin said.

Alan He contributed to this report.