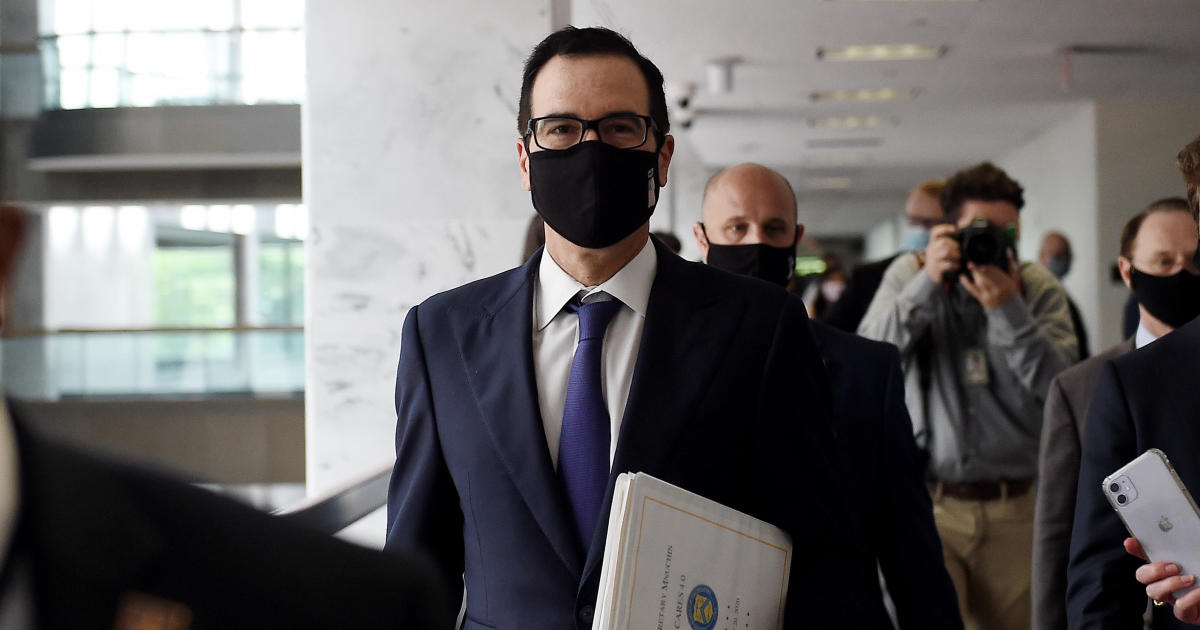 Washington — Treasury Secretary Steven Mnuchin announced Thursday that the White House and Senate Republicans have reached a “fundamental agreement” on their opening offer for the next phase of coronavirus response legislation, but differences over key portions of the proposal delayed hopes of quickly moving forward to negotiations with Democrats.

It is unclear when GOP senators will unveil the text of their bill, even as the expiration of expanded unemployment insurance benefits looms over talks to address the crisis. Mnuchin and White House chief of staff Mark Meadows met with Senate Majority Leader Mitch McConnell at the Capitol on Thursday morning, and Mnuchin told reporters after the meeting that the administration is reviewing the legislative language.

The main priority for lawmakers is determining whether and how to extend the additional $600 in federal aid that Americans on unemployment are receiving per week. Republicans fear that if people are making more money while unemployed than they would at their jobs, it could act as a disincentive for them to return to work. However, Democrats argue that unemployed Americans need the extra boost as they face deadlines at the end of the month for paying bills and affording rent.

The expanded benefits expire at the end of the month, but some states will issue their final payments this week due to a technicality in the calendar.

“Let me just remind people: the time-sensitive issue we’re talking about is next Friday on unemployment and schools,” Mnuchin said, suggesting that other aspects of coronavirus relief could be addressed later. “Some of this stuff, if it takes us a couple of weeks to work with the Democrats and agree on all the pieces we can.” Some Republicans have considered doing a short extension of the additional benefits as a stopgap and then working on other issues.

President Trump has said a payroll tax cut is a priority for him, but conceded in a tweet that it would not be included in Republicans’ proposal. Mnuchin told reporters the president was willing to hold off on the payroll tax in favor of direct payments to Americans.

“The president’s priority is to get money [to people] quickly and one of the problems with the payroll tax is it takes time,” Mnuchin said.

Meadows, who previously served as a congressman, expressed confidence that Congress could reach a deal by the end of next week.

“We’re going to be ready to make sure that those unemployed Americans still have assistance. I don’t imagine our Democrats across the aisle would want to stand in the way of helping those unemployed Americans receive benefits,” Meadows said. “So we’re going to be in a place for that so those deadlines, as you well know on Capitol Hill, always work magic in the 11th hour.”

However, Speaker Nancy Pelosi said in her weekly press conference Thursday that Democrats would be unwilling to “piecemeal” the next phase of coronavirus legislation.

“This is a package. We cannot piecemeal this,” Pelosi said. She was joined by Senate Minority Leader Chuck Schumer, who slammed Republicans for being “un-unified, unserious, unsatisfactory.” He criticized Republicans for wanting to include liability protections in the next round of legislation, which is one of McConnell’s top priorities.

Meanwhile, 1.4 million Americans applied for unemployment benefits in the week ending July 18, the first weekly increase in months. The U.S. has reported more than 3.9 million coronavirus cases and more than 143,000 deaths, according to Johns Hopkins University.

« Twitter hackers accessed DMs of up to 36 people, company says