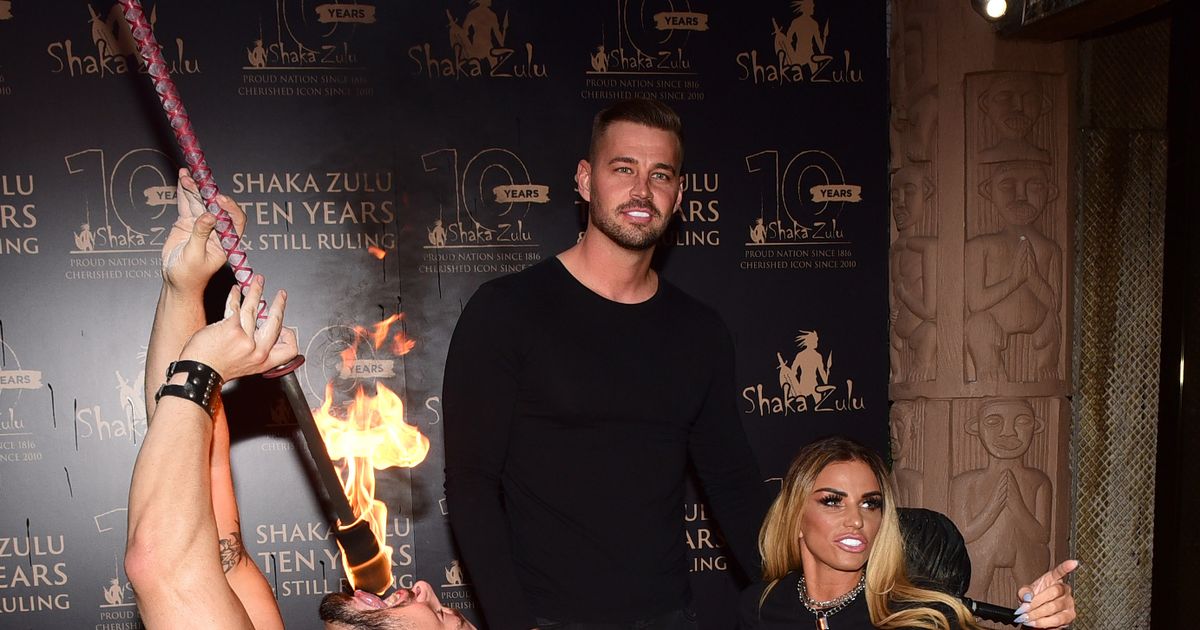 The model, 42, was dressed to impress – despite sporting her moon boots – as boyfriend Carl Woods pushed her down the red carpet at the glitzy restaurant opening 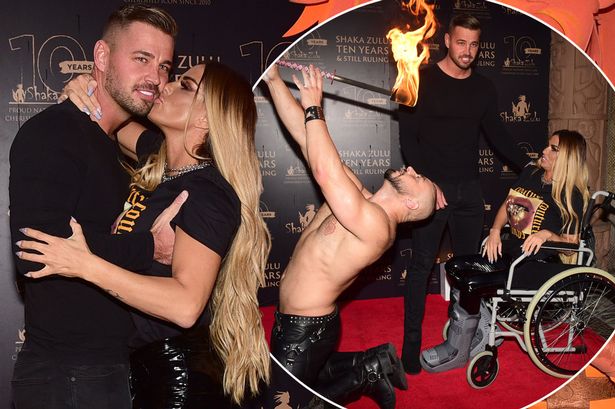 Katie Price managed to grab all the attention at her first celebrity appearance in months, despite not being able to parade and perform for the cameras as usual.

Making a dramatic entrance at North London hotspot Shaka Zulu, wheelchair bound Katie had to be pushed down the red carpet by doting boyfriend Carl Woods.

Despite sporting two clunky moon boots on her feet, Katie retained her usual levels of glamour by slipping on a pair of sexy wet look leggings and a graphic lip t-shirt to attend the glitzy bash. 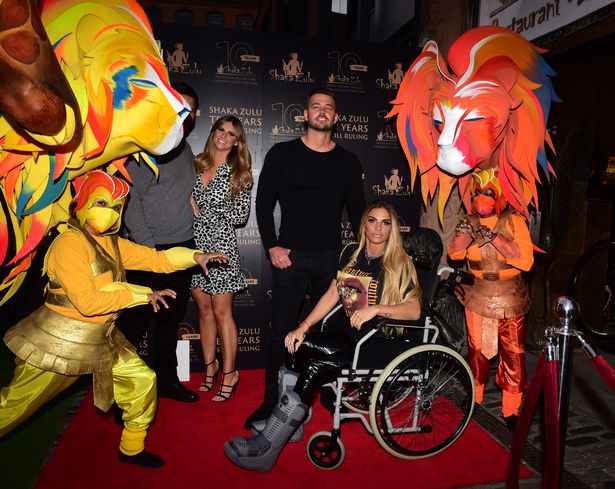 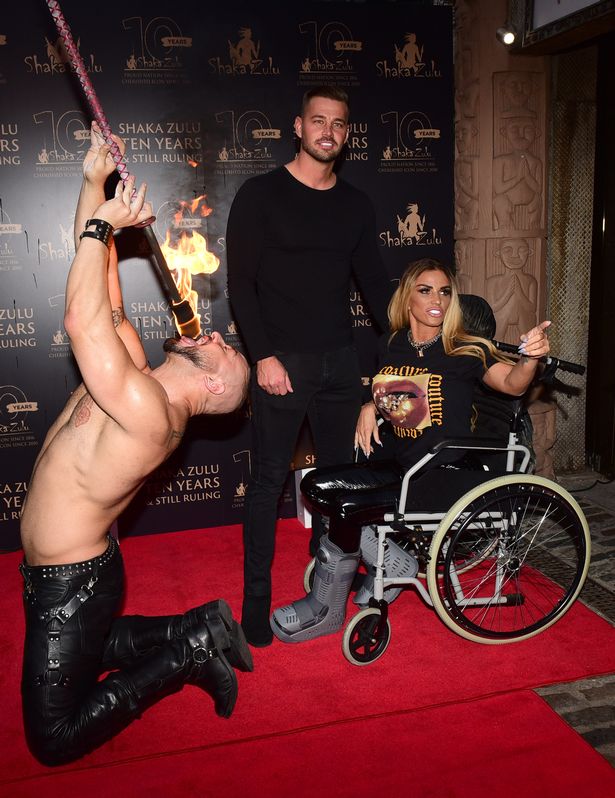 Putting her health woes to one side for the night, The Pricey looked like her old self with her luscious lip-glossed pout and tumbling blonde extensions.

Former Love Island star Carl was happy to let his girlfriend steal focus as he put a supportive arm to her mobility chair while dressed in casual all black attire.

At one point, Carl attempted to get Katie on her feet as he lifted her onto her supportive footwear so she could plant a kiss on his cheek for the cameras. 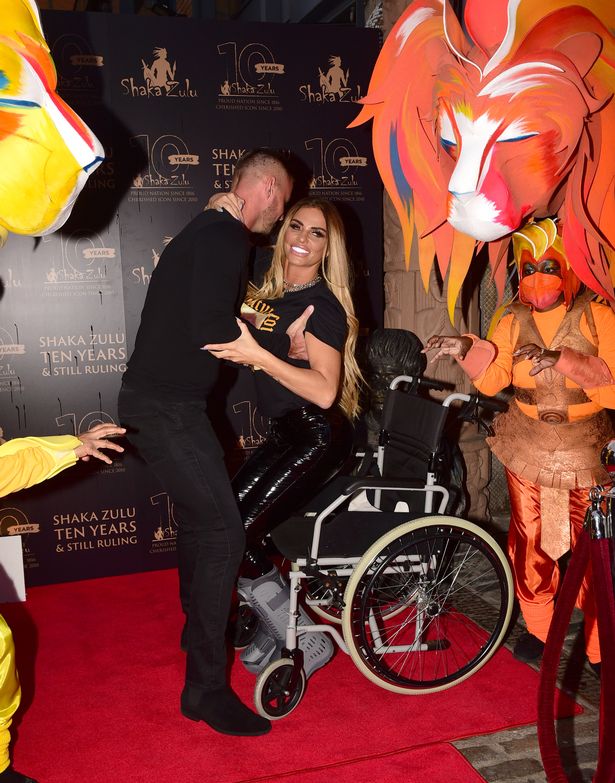 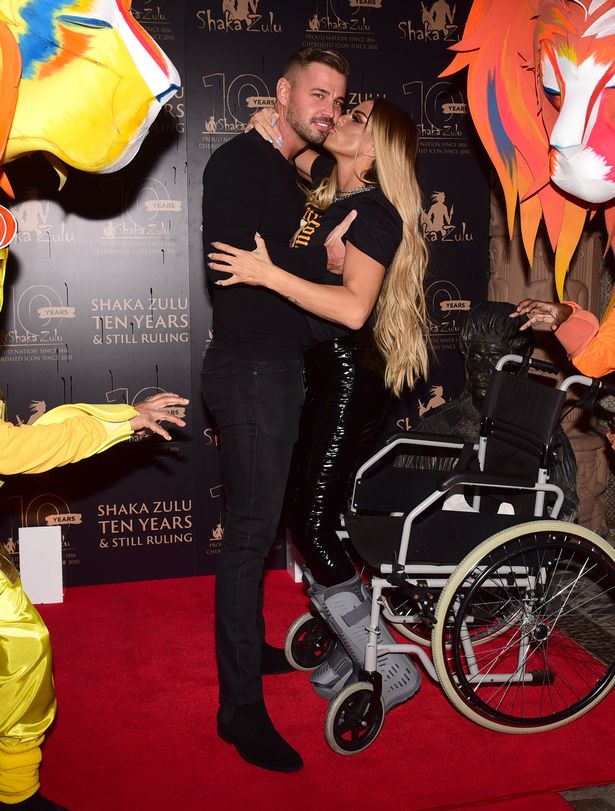 Katie, 42, looked in high spirits for the ten year party of the South African restaurant in what has been her first red carpet appearance for months – and first ever with Carl.

It’s also likely to be the My Crazy Life star’s last official outing for a while given the new restrictions on social distancing outlined this week.

But that could be good news for Katie who has been advised to rest up and stay out of the limelight as she recovers from her injuries.

The model was told she was lucky to not to have been paralysed when she jumped over a wall in Turkey not realising there was a 25ft drop the other side.

Katie shattered bones in both her feet and had to undergo extensive surgery that will leave her confined to a wheelchair for at least six months.

She has been keeping fans updated on her journey and today shared a gruesome video of her at the hospital having her stitches removed.

After boyfriend Carl Woods wheeled her into the treatment room, Katie was helped onto the bed where she showed off her bare feet in full for the first time.

The mum-of-five has been left with stitches stretching from the soles of her feet up to her ankles following extensive surgery to repair her broken bones.