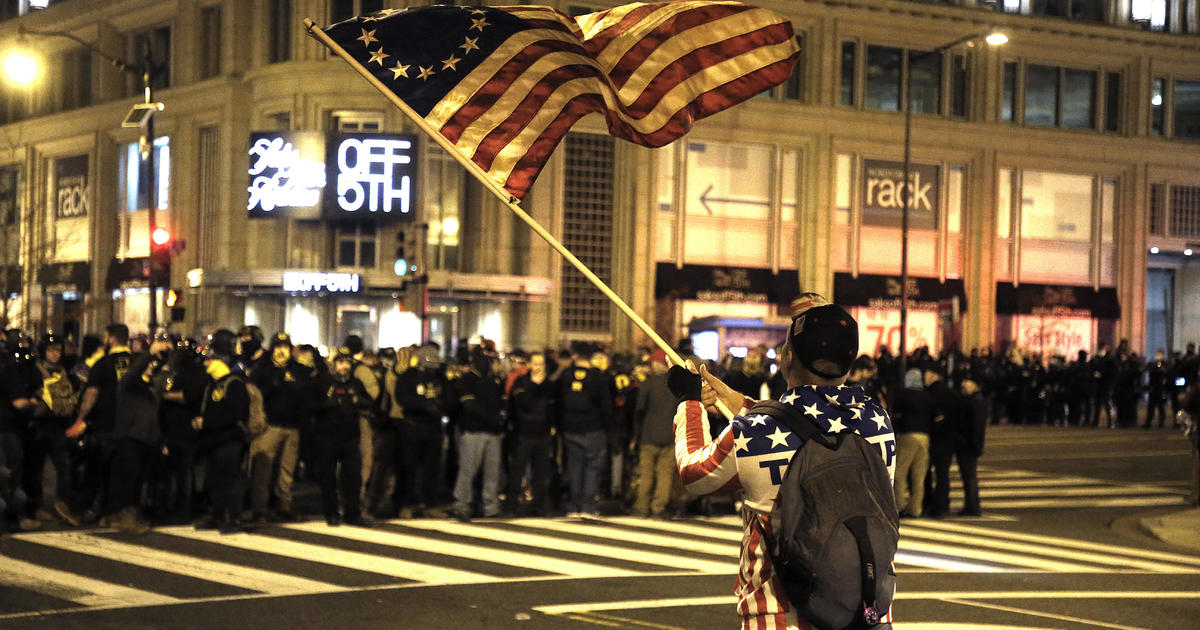 Several people were injured in a night of violence in Washington D.C., including eight police officers who were injured and four people were stabbed near Black Lives Matter Plaza. D.C. Metropolitan Police said Sunday that there were 33 unrelated arrests.

The violence followed pro-Trump rallies held on Saturday to dispute the election results.

The stabbings occurred in Northwest Washington D.C., about four blocks from the White House and near Black Lives Matter Plaza. All victims were hospitalized for non-life threatening injuries, police said.

Phillip Johnson, 29, was arrested for assault with a deadly weapon.

At least nine people were transported to area hospitals, including two officers, according to Washington D.C. EMS.

A Trump supporter waves a flag as the Proud Boys take over a major intersection near Hotel Harrington and Harry’s Bar in Washington D.C., on December 12, 2020.

According to CBS Washington D.C. affiliate WUSA-TV, both Trump supporters and counter-protesters were in the area of Freedom Plaza and Black Lives Matter Plaza. It’s unclear which groups were clashing.

Nearby, the Asbury United Methodist Church said its Black Lives Matter sign was burned in the street. The church, which is on the District of Columbia Register of Historic Places and is the oldest Black church to remain on its original site, has been closed for in-person worship due to the COVID-19 pandemic.

Metropolitan Police said Sunday that it was investigating the incidents that had been captured on video and posted online.

Several thousand people gathered in Washington D.C. earlier Saturday for a “Million MAGA March” in support of President Trump. Mr. Trump on Saturday tweeted his apparent surprise at the protest: “Wow! Thousands of people forming in Washington (D.C.) for Stop the Steal. Didn’t know about this, but I’ll be seeing them! #MAGA”

Mr. Trump has not yet conceded the 2020 election, despite all 50 states having certified their results, and after his last-ditch legal attempts were quashed in the courts. Electors will meet Monday to formally cast their votes for president and vice president, and those results will be counted by Congress on January 6. President-elect Joe Biden will be inaugurated on January 20.

A CBS News poll released on Sunday found that 82% of Mr. Trump’s backers do not believe Mr. Biden is the “legitimate winner.”