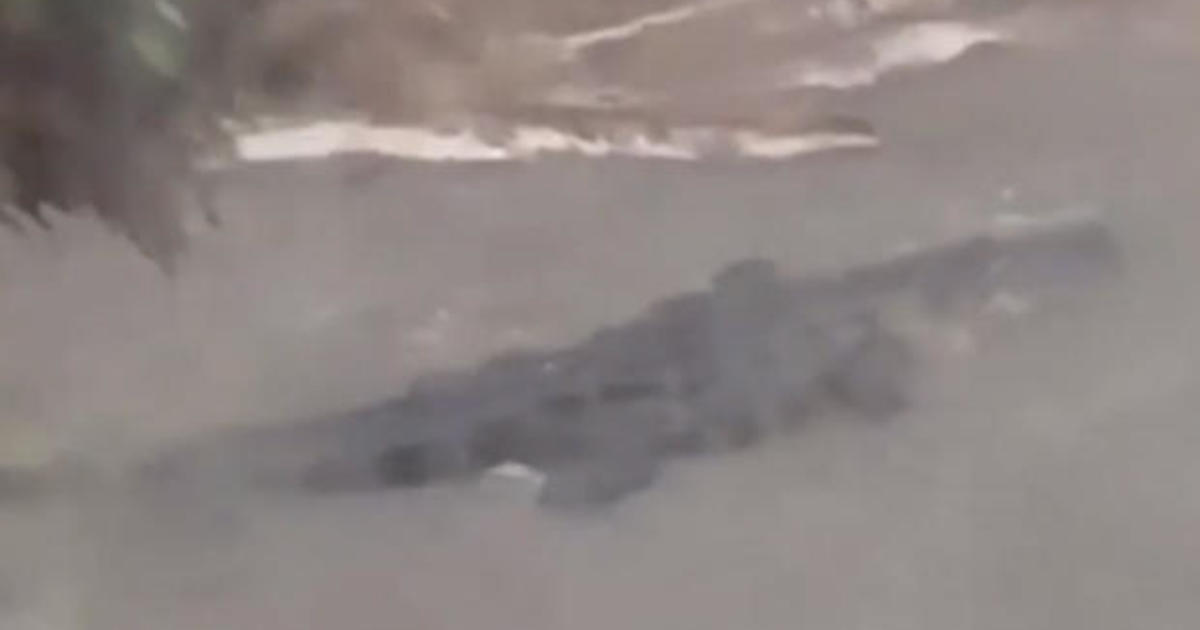 Hurricane Sally didn’t just bring massive floods and downed power lines to the Gulf Coast — it also left a few natural dangers in its wake. Tina Bennett, who lives in Gulf Shores, Alabama, shared video with CBS affiliate WKRG of a giant alligator swimming through the waters surging outside her residence after Sally made landfall on Wednesday.

“Oh my god, this is outside of our window!” Bennett can be heard saying in the video. “It is a 10 or 12-foot alligator!”

Our yard on Plash Island in Gulf Shores We have been surrounded by water, alligators, and poisonous snakes

“We have been surrounded by water, alligators, and poisonous snakes,” she wrote on Facebook.

WKRG-TV meteorologist Thomas Geboy, who shared the video, urged residents to shelter in place until flood waters receded because of the displaced wildlife and the downed power lines in Alabama.

Meanwhile, Brittany Decker, a reporter with Birmingham’s WVTM-TV, also posted a photo of an eel swimming on the side of a highway in Orange Beach.

Eel swimming on the side of the road on Hwy 161 @WVTM13 pic.twitter.com/4IemUm1XqG

In Florida, Jason Garcia, a photographer for WKRG-TV, captured video of a floating island of fire ants in a flooded park in Pensacola.

There are all kinds of reasons to stay out of flood waters from Hurricane Sally and other storms on the Gulf Coast, snakes, gators, downed power lines. But there's also a hidden hazard that could leave you burning for days, literally.https://t.co/z4ztvsf5tY

As rain and wind from Sally started reaching the Gulf Coast, the manager of a Mississippi alligator ranch was just hoping he wouldn’t have to deal with a repeat of what happened during Hurricane Katrina.

That’s when about 250 alligators escaped their enclosures as storm surge pushed water over the grounds.

But this time, the storm slid east and spared the ranch.

Earlier this week, forecasters said Hurricane Sally could push up to 9 feet (2.7 meters) of ocean water surging into the swamps and wetlands where the gators roam, floating them up and over the fences around the farm. As the hurricane moved east of Mississippi, the surge forecast was reduced to no more than 4 feet (1.2 meters).

Parker’s farm has alligators up to 14 feet long, roaming and swimming through ponds, sand dunes and tall marsh grass. Visitors can take air boat rides or walking paths to see the gators in their natural habitat and learn about the animals. It’s been around about 45 years.

The Associated Press contributed to this report.

« Trump says CDC director "made a mistake" on vaccine timeline