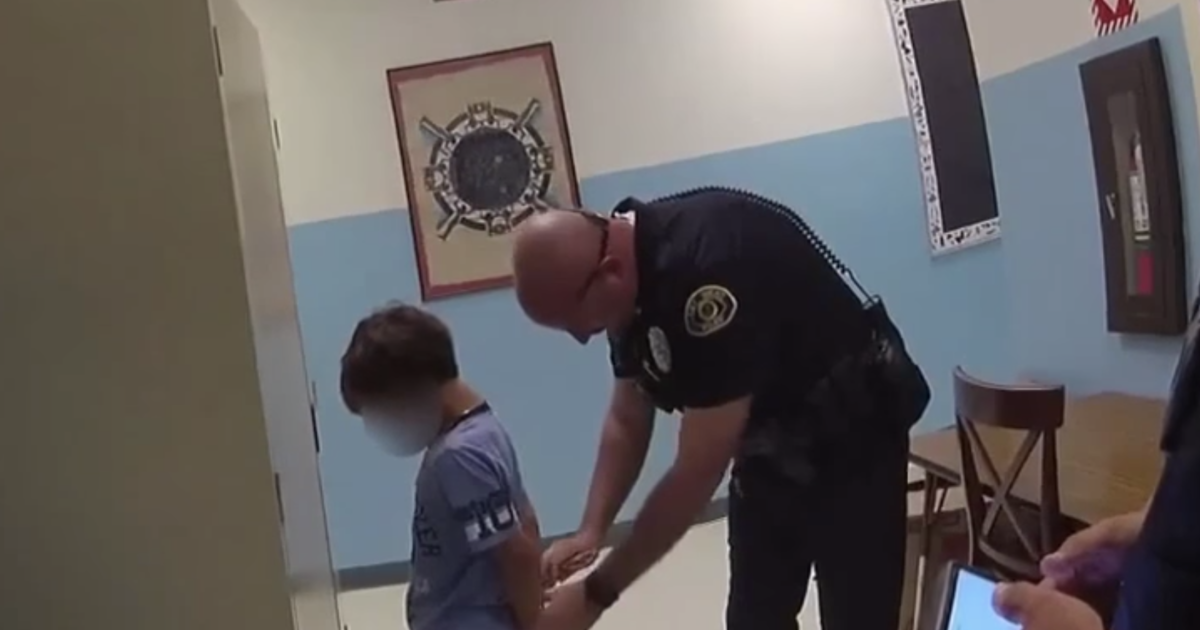 Newly-released video of an 8-year-old boy being arrested in Florida in 2018 has sparked renewed scrutiny. The bodycam video, posted online Sunday night by civil rights attorney Ben Crump, shows a Key West officer attempting to handcuff the boy at school.

The boy, who has emotional and behavioral disabilities, was charged with felony battery, according to a press release from Crump’s law firm. The boy’s mother, Bianca N. Digennaro, has retained Crump and civil rights attorney Devon M. Jacob to represent her family in the case.

Unbelievable!! @KWPOLICE used “scared straight” tactics on 8yo boy with special needs. He's 3.5 ft tall and 64 lbs, but they thought it was appropriate to handcuff and transport him to an adult prison for processing!! He was so small the cuffs fell off his wrists! pic.twitter.com/iSTlXdKas6

At least three officers are present in the video, including the one wearing the body camera. One officer is seen telling the boy he’s going to jail, then frisking the boy in a school hallway. The officer attempts to put the boy in handcuffs, which are too large for the boy’s wrists.

The officers tell the boy to keep his hands behind his back as they lead him outside. Another woman is present for part of the arrest, which took place in December 2018, but it is unclear who she is.

“You understand this is very serious. And I hate that you put me in this position that I have to do this,” one officer tells the boy. “Alright, the thing about it is, you made a mistake and now it’s time to learn from it and grow from it, not repeat the same mistake again.”

Official statement by @AttorneyCrump about this horrific and heartbreaking incident: pic.twitter.com/pgsrBL5Kbs

In his statement, Crump said: “At eight years old, 3.5 ft. tall and 64 lbs., this little boy didn’t post a threat to anyone.” A teacher called the police when the boy acted out, Crump said.

According to the incident report, the teacher, Ashley Henriquez, told police officers the boy battered her during class. Henriquez said the boy was not sitting properly at the lunch table and she asked him several times to sit correctly because she was concerned for his safety.

She asked the boy to walk with her and he “began to curse at her and told her, ‘my mom is going to beat your ass,'” the incident report, written by Officer Michael Malgrat, reads. Henriquez stated the boy then punched her in the chest. Malgrat wrote in the report that he observed the boy “had his hands clinched into fists and he was postured as if he was ready to fight.”

Henriquez did not sustain any obvious injuries as a result of the punch, according to the report. The boy was placed in custody and transported to Monroe County Detention Center for processing.

“Based on the facts of the case there is probable cause to believe that did violate FSS 784.081(2c) by actually and intentionally striking Henriquez against her will,” the incident report reads. “Henriquez is employed by the Monroe County School District as a licensed teacher.”

In his statement, Crump said the boy had an IEP, or Individualized Education Program for children with disabilities. The IEP is “intended to make sure his educational experience was appropriate for him,” Crump said in the statement.

“Instead of honoring and fulfilling that plan, the school placed him with a substitute teacher who had no awareness or concern about his needs and who escalated the situation by using her hands to forcibly move him,” the civil rights attorney said in the statement.

“This is a heartbreaking example of how our educational and policing systems train children to be criminals by treating them like criminals – if convicted, the child in this case would have been a convicted felon at eight years old,” he said. “This child was failed by everyone who played a part in this horrific incident.”

Fellow attorney Jacob said as a former police officer he was “appalled” by the conduct of the offices.

Crump and Jacob said they will file a federal lawsuit on behalf of Bianca N. Digennaro, the boy’s mother, against the officers, school officials, the Monroe County School District, and the city of Key West, according to the press release.

CBS News has reached out to the Key West Police Department and Monroe County School District for more information and is awaiting response.