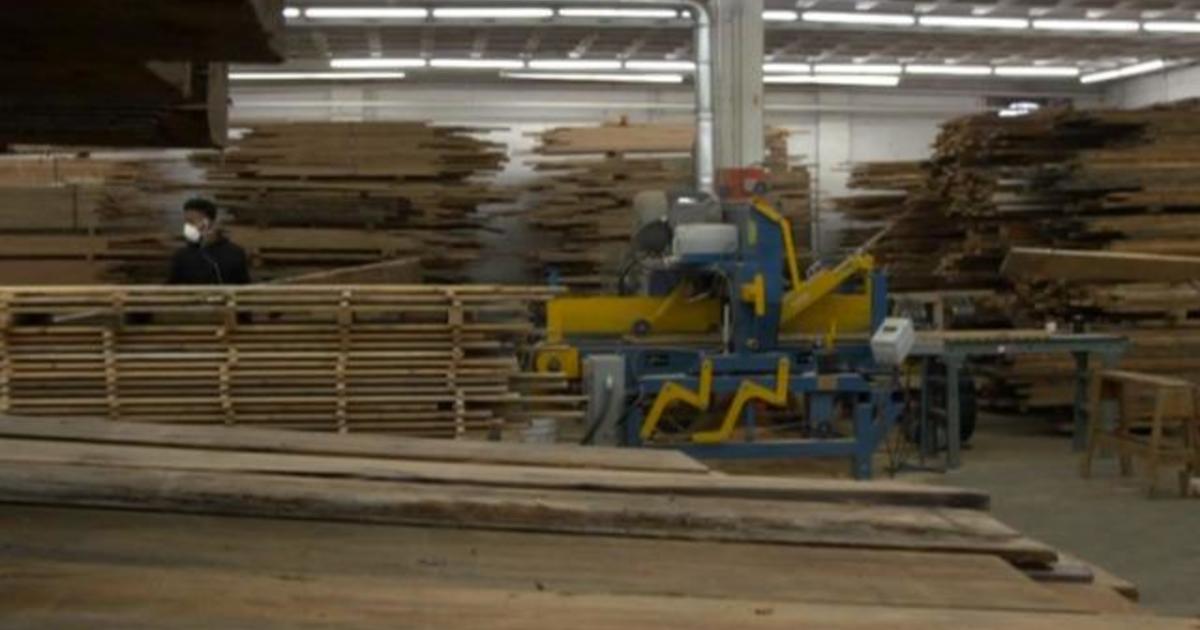 Baltimore-based lumber company Brick and Board is anything but run of the mill. While fine wood furniture often comes with an environmental price, their warehouse is full of wood from urban areas where downed trees and old buildings might otherwise ends up in landfills.

“A lot of this lumber was harvested around the Civil War,” founder Max Pollock told CBS News’ Errol Barnett. “And a lot of the trees that, you know, were turned into this lumber really started growing probably in the 1500s.”

Brick and Board sells reclaimed wood and other salvaged material in Baltimore, a city with an estimated 16,000 vacant and abandoned properties.

Sometimes, these old materials could have some historical value.

Referring to antique yellow pine saved from crumbling row homes, Pollock said the material “has a grain that you wouldn’t find today.”

“It has a color that you wouldn’t find today. And it really, just as importantly to us, it has a story,” he explained.

For five years, Pollock has been a part of what could be described as an urban lumber movement.

“It refers to both lumber that’s harvested from buildings that would otherwise be discarded and sent to a landfill, and it also refers to capturing material that falls during storms,” he said.

Woodworkers across the country are currently building the movement, but according to Pollock, there is more work to be done.

“If you were to poll 100 people who are working in the reclaimed wood field, the truth is is that a lot of them look like me. They’re White guys with beards and with flannel shirts,” he said.

However, as Pollock explained, that does not nor should not have to be the case.

“It’s always been important for us to try to democratize these skills a little bit,” he said. “To try to take people who may not have had the opportunity to go to shop class or may not have had the opportunity to apprentice with a carpenter, and teach them about the material, teach them about milling this stuff, so that they can create a career out of it.”

Donte Godwin, 21, who has worked at Brick and Board for about a year and a half, said he appreciates the opportunity in a city where the unemployment rate hovers close to the national average.

“It’s not that easy getting an opportunity here. I was lucky. I had mentors to give me — I wouldn’t have knew about this opportunity if it weren’t for them,” Godwin said.

Brick and Board is just one of the private partners in the Urban Wood Project. The initiative is a collaboration between the city of Baltimore, the USDA Forest Service and others. Their hope is that salvaging wood can revitalize the city.

“Zip codes like this and similar have high rates of unemployment, high rates of poverty, high rates of incarceration, underlying health issues,” Hines said. “This project can ameliorate a lot of that by thinking about ways to employ people, give people opportunities, avoid waste, and plant trees in places that desperately need them.”

Jennifer Szeliga, who leads the Urban Wood Rescue in California, has a similar mission.

“If you think about a tree… it’s sequestering or capturing carbon, right, so that’s the CO2 that’s in the air and it stores it in it’s in the body of the tree,” she said. “And so, when that tree is removed and it’s dying, and it’s decomposing it releases all of that CO2 back into the atmosphere, contributing obviously to climate change.”

Szeliga’s group is funded in part by a grant from the California Department of Forestry and Fire Protection. She said her organization has sequestered 6,770 metric tons of carbon — equal to about 731,000 gallons of gas.

“We’re able to divert logs that would normally go to the landfill into our yard… and then get them back out into the community,” she said.

However, the process she described is not an easy one — Szeliga said the process to turn a log into a piece of furniture is a long and costly process, so building out partnerships to help is “important to success.”

One of those partnerships is with Minnesota-based furniture company Room and Board.

Also part of the Urban Wood Project, the company turns reclaimed wood from Baltimore, Sacramento, Detroit and Minneapolis into sustainable furniture and decor.

Room and Board President and CEO Bruce Champeau said the effort was worth it for future generations.

“We have one planet. All of us need to look at it as individuals to say, how can we make a difference?” Champeau said.

On top of that, the effort also bolsters communities and promotes job growth in the process.

“When you take those two things and you combine them, that’s where it becomes something really magical,” he said.

« Reginae Carter Shows Off Her Cleavage In This Clip And Fans Say She Looks Like Her Mom, Toya Johnson