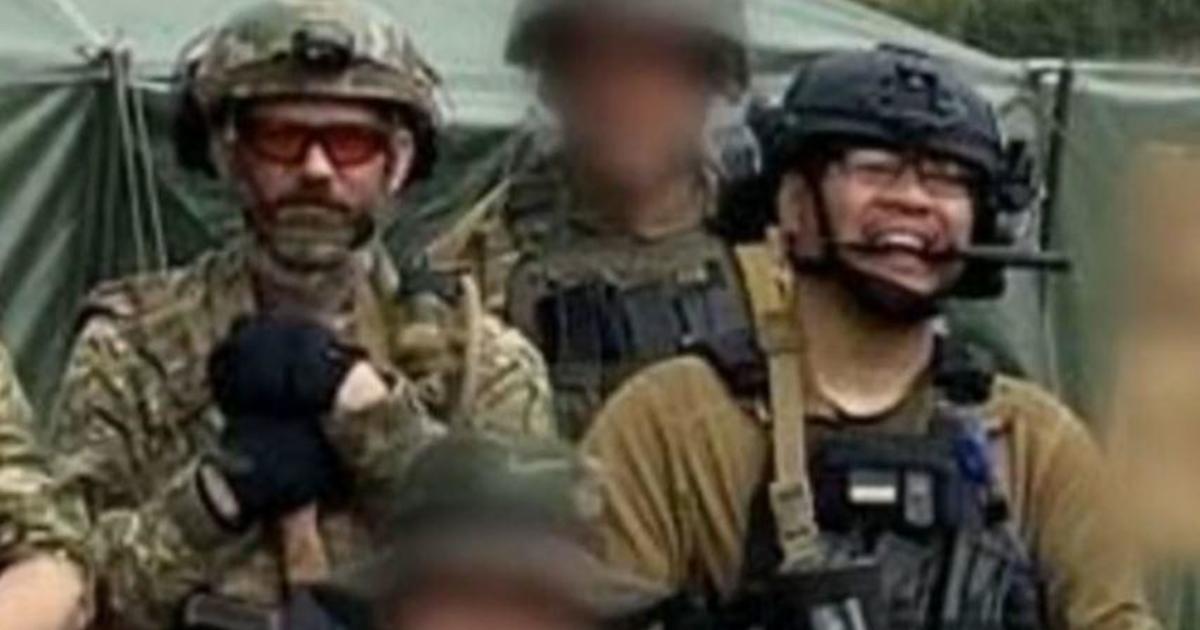 U.S. fighter in Ukraine glad to see friends alive, even in Russian hands

Kharkiv, Ukraine — As the brutal battle for control of the strategically essential city of Severodonetsk in eastern Ukraine rages, President Volodymyr Zelenskyy has predicted that Russia will escalate its attacks across his country’s east this week. Despite the U.S. government warning against all travel to the country, Americans have been part of the fight, including two who have been captured by Russian forces.

CBS News correspondent Chris Livesay is in the eastern city of Kharkiv, and he spoke with another American who fought alongside Andy Tai Ngoc Huynh, 27, and Alexander Drueke, 39, before their capture on the battlefield.

The U.S. national insisted on remaining anonymous because he’s still fighting on the front lines from which Huynh and Drueke vanished. The two men resurfaced in a video aired on Russian media late last week, captive, and speaking under duress.

In the video, Drueke says he’s been repeatedly beaten and, at one point, the two are seen bound, blindfolded and forced to their knees. Drueke says he fears they’re going to be executed.

U.S. military veterans Andy Tai Ngoc Huynh and Alexander Drueke left their homes in Alabama to serve with Ukraine’s army on the battlefield. They were reportedly captured by Russian forces during fighting in eastern Ukraine in June 2022.

Recalling the fight they were all engaged in just before his comrades were taken prisoner, the American told CBS News they and the Ukrainian forces they were serving with were withdrawing from the area amid a Russian advance.

“The team was supposed to be setting up ambush positions, and instead a hasty defense was set up to allow more Ukrainian troops to withdraw,” he told Livesay. But then there was an explosion. He and his fellow troops suspected “the blast had knocked them unconscious, and that’s how they were captured.”

“They’re not out to be glory hounds,” the American fighter told Livesay. “They’re not warmongers or any of those other types that are out here for egotistical reasons… They wound up out here a bit by accident in the situation they are currently in, and it’s sort of a series of unfortunate events, in hindsight. They wanted to do good, and… This is sort of — it was, I suppose, the unfortunate result of that.”

“We were advised a while back that execution could be a possibility,” the fighter said, adding that he was “very happy that they did not follow through with that” in the case of his two friends.

A map shows the Donetsk and Luhansk regions of Ukraine.

But the two men’s whereabouts remain uncertain. At one point in the video aired on Russian media, Drueke’s interrogator says they’re in the Donetsk region of eastern Ukraine, on ground held by pro-Russian separatists.

Earlier this month, two British men and a Moroccan were found guilty of fighting alongside Ukraine’s forces and sentenced to death by the pro-Russian administration that controls that region.

The American fighter who spoke to CBS News said if he could speak to Huynh and Drueke now, he would apologize to them.

“Because they sort of followed me out here,” he said. “We all agreed. There was no leader in the group. But, yeah, I definitely feel a bit guilty. Without a doubt. We should have taken a closer look at more humanitarian options or training options. If we did, then they wouldn’t be in the situation they’re in.”

The American fighter said he hoped his friends were “focusing on what they want to do when they get home,” to get them through this period. “I hope Andy is focusing on getting back and marrying his fiancée, and what needs to be done in planning it out in his head. Things like that can possibly help in their situation.”

Huynh was engaged to be married not long before he and Drueke left their homes in Alabama for Ukraine.

The U.S. State Department has said it’s doing everything it can to locate the Americans and ensure their safety, and the U.S. fighter who spoke to CBS News said he believed that.

He said that he, Huynh and Drueke understood the risks before traveling to Ukraine, but he hinted that they might have underestimated the overwhelming military advantage Russia has in firepower — and in its control of the airspace in particular — and he offered a warning to other Americans considering the same trip.

“Anyone who is over here for egotistical glory-seeking, or wants to come over and say they were in a group, but only to malinger and sit in a tent – those people, I would say, don’t bother. You’re going to be a burden on your teammates and more than likely, you will be hurt. You can be killed, or you can get somebody else killed. People need to realize how intense it can be. It’s not the Taliban. It’s not the Iraqi army. The Russians have the air support and air superiority here. Without a doubt.”

Another American who volunteered to join Ukraine’s fight against the Russian invasion, who also spent time with Huynh and Drueke in Ukraine, told CBS News last week that he believed they will get back home, because they’re too valuable to Moscow as bargaining chips to be killed.

The State Department confirmed late last week that in addition to Huynh and Drueke, it is also looking into reports that a third American man is missing in Ukraine. Retired Marine Captain Grady Kurpasi, a 20-year veteran of the U.S. military, went silent after taking small-arms fire in the Kherson region, according to a family friend. There has been no information on him since.