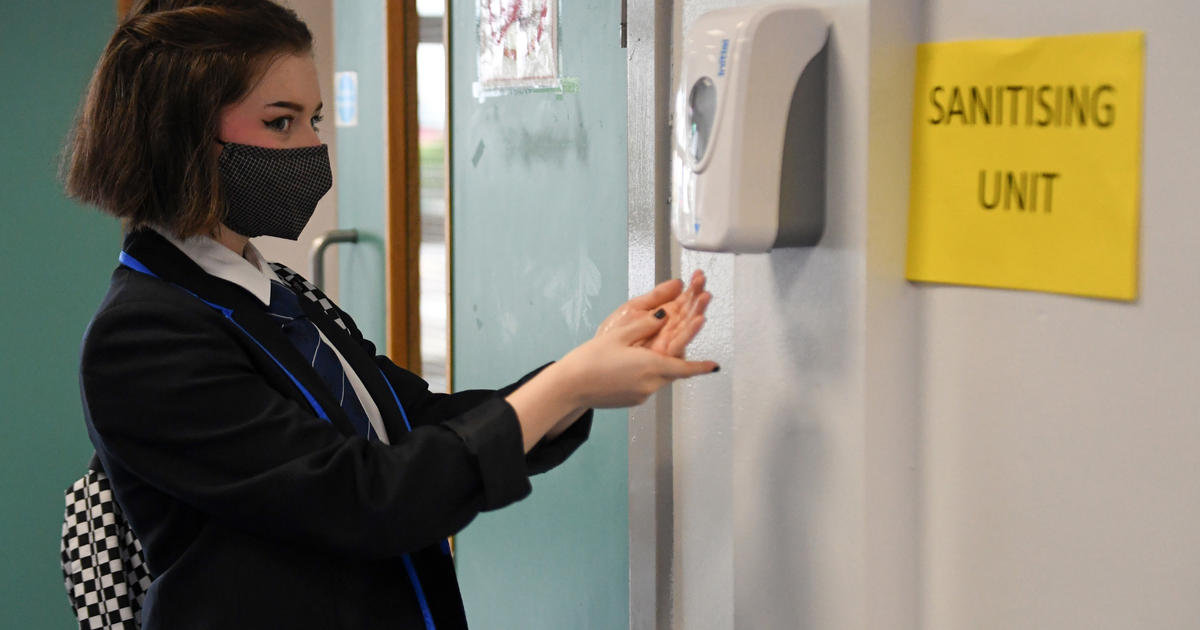 U.K. gambles on “small amount” of COVID data to get kids into schools

Edinburgh — Scottish children went back to school for the first time in five months on Tuesday as leaders across Britain try to kickstart a return to education despite a resurgence in the number of coronavirus cases.

Scotland’s devolved government has ordered pupils in different parts of the country to return gradually through this week, with all classes set to have resumed fully by next Tuesday.

In England, where plans to restart schooling early, in June, had to be abandoned following opposition from teaching unions and some parents, the government is adamant that children will return in early September, as usual.

A pupil uses a sanitizing unit as students return to Holyrood Secondary School in Glasgow for the first time following the easing of coronavirus lockdown measures, August 12, 2020.

But the reopenings come as Britain, which has recorded the highest death toll in Europe from COVID-19 with more than 46,000 fatalities, could be witnessing the start of a resurgence.

On Sunday, officials recorded more than 1,000 new cases in 24 hours for the first time since June, as a months-long lockdown has been gradually eased.

Restrictions have recently been reimposed in some local areas in central and northern England, as well as in the Scottish city of Aberdeen last week, where pubs and restaurants had to close and travel restrictions were renewed.

Scottish First Minister Nicola Sturgeon said Monday it was “entirely understandable” for children, parents and teachers to have “nerves and anxiety” about the return, but she insisted she was “impressed and reassured” by the preparations schools were taking.

Concerns about COVID-19 in kids

Last week, a survey of 24,000 educators by the Educational Institute of Scotland found that only 18 percent of respondents were confident that it was safe enough to return.

“Teachers want to see schools reopening… but they are very clear that this has to be done safely,” institute general secretary Larry Flanagan said in a statement.

Prime Minister Boris Johnson, who has responsibility for education in England only, insisted that “we will get schools back” and that he was “very impressed” by preparations to mitigate against the virus in the classroom.

“We have got to stick to our discipline – so in schools, they have some very well thought through plans for how to manage it,” he said, warning that further local outbreaks and counter-measures were inevitable.

The government has reportedly been encouraged by a Public Health England (PHE) study finding little evidence of the virus being transmitted in schools.

“The risks to children from COVID are very low and the risks of school closures we know are very serious,” Russell Viner, president of the Royal College of Paediatrics and Child Health and a member of a key government advisory group, told The Sunday Times in reference to the probe, which involved some 3,000 schools.

Speaking to The Guardian, Viner conceded that there was still relatively little conclusive data on the extent to which children transmit the coronavirus to others, but it was clear that elementary school-aged children, in particular, appeared to contract it less in the first place.

“I think we should be reassured by the admittedly quite scarce and incomplete data we have. But I think we’re in situation of uncertainty. And we either sit and damage our children a whole generation further, or we act on what is a small amount of reassuring data,” he said.

The PHE study, likely to be released as preliminary data soon, is expected to state that based on observed data children are much less likely to transmit the disease than adults, and that schools that remained open during the pandemic or reopened in other countries have not been major sources of spread.

British Health Minister Edward Argar told Britain’s Sky news that, based solely on research that has already been published, “we are confident that children and young people are much less at risk from this disease and from passing it on than other adults more broadly in the community.”

The Guardian cited Australian epidemiologist Kristine Macartney, lead author of the most recent, comprehensive study of coronavirus transmission in schools, as saying children going to schools did not appear to be at the root of community spread of the virus, but vice versa: If there was already a higher rate of infection in a community, then more school children would test positive, indicating that kids were more likely to catch it from adults in their households than bring it home and infect others.

“Overall, in the schools we’ve continued to monitor since the very beginning of the year [in New South Wales, Australia], we have not seen much secondary transmission, but by and large, that’s been in the context of being able to control transmission in the community.”

In the study she led, which was published earlier this month in The Lancet Child and Adolescent Health, Macartney and her fellow researchers concluded that, provided there were “effective case-contact testing and epidemic management strategies” in place in the wider community, “children and teachers did not contribute significantly to COVID-19 transmission via attendance in educational settings.”

Read More: U.K. gambles on “small amount” of COVID data to get kids into schools

Army base Fort Hood under scrutiny after string of deaths »