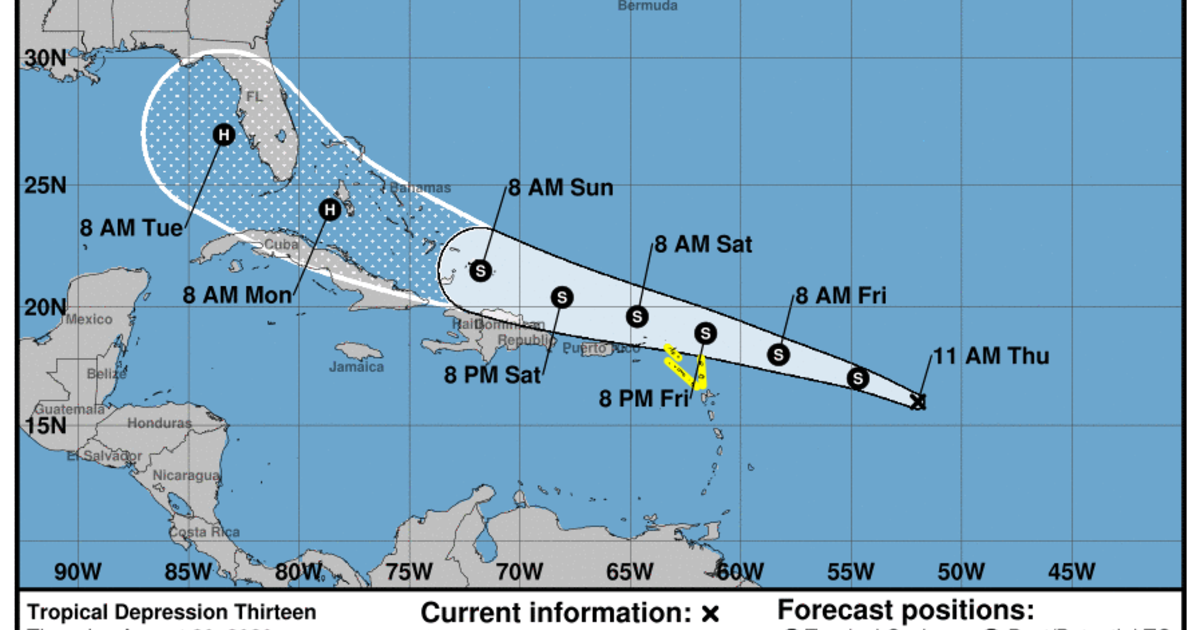 As the typical peak period of hurricane season begins, right on cue the National Hurricane Center is tracking two systems, both with the potential to make landfall next week.

Tropical Depression 13 formed Wednesday east of the Lesser Antilles. It is expected to intensify and may make landfall as early as Monday, perhaps as a hurricane, in or near South Florida.

Tropical Depression 14 formed Thursday morning in the Caribbean, south of Cuba. This storm will move west and then northwest into the Gulf of Mexico, possibly posing a landfall threat in the Tuesday-Wednesday timeframe in the western half of the Gulf Coast.

If both systems grow into tropical storms — with winds of 39 mph or greater — their names would be Laura and Marco.

Two systems at one time are par for the course in a season that is on a record pace, with 11 named storms already. If both of these new systems become named storms, the tally will reach 13 — compared to the normal total of 12 for the entire season, which lasts through the end of November.

Tropical Depression 14 has formed in the western Caribbean. The next Atlantic named storm in 2020 will be #Laura. Current Atlantic record for earliest ‘L’ storm is Luis on August 29, 1995. #hurricane pic.twitter.com/2haa6JvLOK

This record pace comes at a time when we haven’t even reached the season halfway mark yet, with the peak typically occurring around September 10th.

NOAA and other forecasting outlets have warned of a near-record number of storms this season, with up to 24 or 25 named storms predicted. If that occurs, it would make the 2020 season the second most active on record. The record is 28 named storms in 2005, a year when the National Hurricane Center was forced to use the Greek alphabet after running out of storm names. That is likely to happen again this season.

Tropical Depression 13 is located several hundred miles east of the northern Leeward Islands, east of Puerto Rico, and it is heading west-northwest at a fast pace, over 20 mph. It is forecast to reach near Puerto Rico on Saturday, likely moving north of the island as a tropical storm.

Assuming it moves north of Puerto Rico and the islands of Hispaniola and Cuba, as forecast, it will not be inhibited by the terrain of the islands would continue to strengthen with the above-normal water temperatures near the Bahamas and along the South Florida coast, in the Gulf Stream.

The official forecast from the National Hurricane Center predicts it will be at hurricane strength by Monday August 24, as it nears South Florida. The system may make landfall, or pass just south of the peninsula through the Florida Keys or the Florida Straits.

Systems that take a track like this have been known to intensify rapidly — like Category 5 Hurricane Andrew in 1992, which coincidentally made landfall in South Florida on August 24th of that year and caused massive damage.

Hurricane Andrew made landfall on August 24th, 1992. Of course it would be a coincidence if we had a landfalling hurricane in South Florida on Monday, BUT the point is that tracks such as TD13, IF it can organize properly, can intensify rapidly. Note: water temps are above normal pic.twitter.com/7qJ8adw5TA

Due to the fact that atmospheric conditions are favorable for development once the system arrives north of the Caribbean islands and Bahamas, and due to ocean temperatures that are above normal, residents should be preparing their hurricane safety kits now for the possibility of a serious threat.

Because of the timing of this system, it will likely be in its intensifying phase when it reaches South Florida. Strengthening systems at landfall always produce more damage than systems that are stable or weakening at landfall. So residents should be prepared for a category above what is forecast from the National Hurricane Center.

Two tropical systems. both moving over above normal water temperatures (shown in orange). Prepare for possible rapid intensification of one of these, more likely TD13, which is the eastern system. pic.twitter.com/m3FeY8g7Wn

Meanwhile Tropical Depression 14, located in the Caribbean, looks very healthy on satellite images. The system is forecast to move northwest near the Yucatan peninsula this weekend and then into the central Gulf of Mexico on Monday and Tuesday. As of now it is not forecast to reach hurricane strength, but that remains to be seen.

Residents from Texas to Louisiana should pay close attention to the evolution of Tropical Depression 14. It will be impacted by the system behind it heading for Florida. Two tropical systems cannot merge, so one will strengthen at the expense of the other weakening. Which system “wins” remains to be seen, but as of right now the system to the east, Tropical Depression 13, is favored.

In addition to water temperatures, other factors include a developing La Niña in the Pacific Ocean, which is associated with active Atlantic hurricane seasons, and a very active North African monsoon, which has spawned numerous tropical seedlings in the eastern Atlantic Ocean.