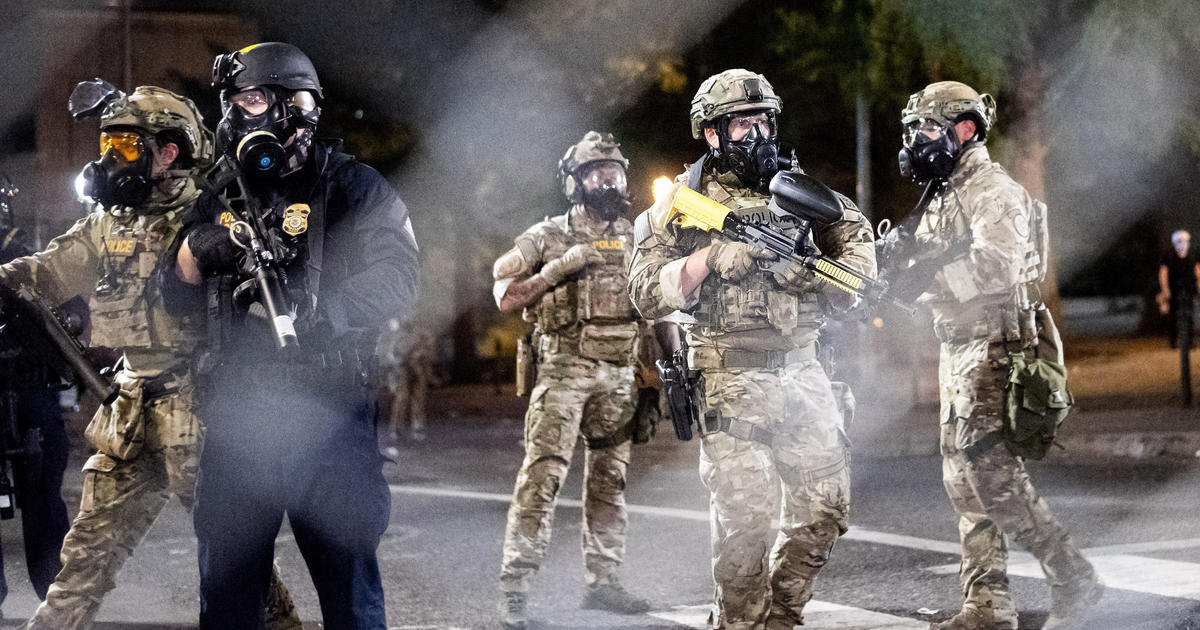 Trump considers sending feds to cities other than Portland

President Trump on Monday said he is considering sending federal officers to cities other than Portland after they did a “great job” there. Authorities from several federal agencies have been sent to Portland to quell protests around the federal courthouse, but the presence of federal officers led to violent clashes over the weekend, leading to Oregon officials asking them to leave the city.

Mr. Trump described Portland as being “out of control,” describing the protesters as “anarchists.”

“They were for 51 days ripping down that city, looting it. The level of corruption and what’s going on there’s incredible. And the governor comes, ‘We don’t need any help,'” Mr. Trump said.

CBS News has obtained a memo showing that the Trump administration is planning to send 175 federal officers to assist local police departments in Chicago, with Albuquerque, New Mexico, and Kansas City, Missouri, possibly next.

Chicago’s mayor, Lori Lightfoot, told reporters she had “great concerns” about the report, “particularly given the track record” in Portland. “We don’t need federal agents, without any insignia, taking people off the street and holding them, I think, unlawfully. That’s not what we need,” Lightfoot said.

According to Portland police, hundreds of people were present while “dozens of others tampered with the fence around the courthouse” between around 9:40 p.m. and 11:30 p.m. Around 11:40 p.m., police said “people pulled down the fence allowing access to the area in front of the courthouse” and “dozens of people with shields, helmets, gas masks, umbrellas, bats, and hockey sticks approached the doors.”

But Portland police stressed they did not engage with the protesters at all.

Deputy Homeland Security Secretary Ken Cuccinelli on Monday tweeted a photo of his leg bleeding, saying it was a result of violent clashes. “Just 1 injury from Portland. 4 stitches from a slingshot. The violence continues,” Cuccinelli wrote. In later tweets, he wrote that federal officers want “peace” and protesters want “violence.”

Monday marked the 53rd day of protests in Portland. Protests first erupted in June after George Floyd’s death at the hands of police in Minneapolis — but lately, they’ve become about federal authorities’ presence in the city. Under an executive order from Mr. Trump in June, federal agents are being ordered to protect federal monuments and buildings.

Video posted to social media showed federal officers pulling people off the streets without an apparent explanation. Oregon Attorney General Ellen Rosenblum said Friday the state is filing a lawsuit against several federal agencies, including the Department of Homeland Security, for engaging in “unlawful law enforcement in violation of the civil rights” of protesters and detaining people without probable cause.

Oregon’s federal lawmakers on Monday announced a bill to “block the Trump administration from deploying federal forces as a shadowy paramilitary against Americans,” according to a release from Senator Jeff Merkley’s office.

Over the weekend, police and protesters clashed during demonstrations over a Columbus statue in Chicago’s Grant Park. The Civilian Office of Police Accountability said Sunday that it had received more than 20 complaints against Chicago Police officers as a result of protests in Grant Park, CBS Chicago reported. The complaints included claims of excessive force, unnecessary oleoresin capsaicin (OC) spray or pepper spray, denial of counsel, and operational violations.

Meanwhile, Police Superintendent David Brown said Monday that 49 officers were injured Friday, including 18 who were sent to hospitals for their injuries. Brown said one sergeant suffered a broken eye socket when an explosive was thrown toward police, detonating near his face.

« How Gen Z is revolutionizing activism