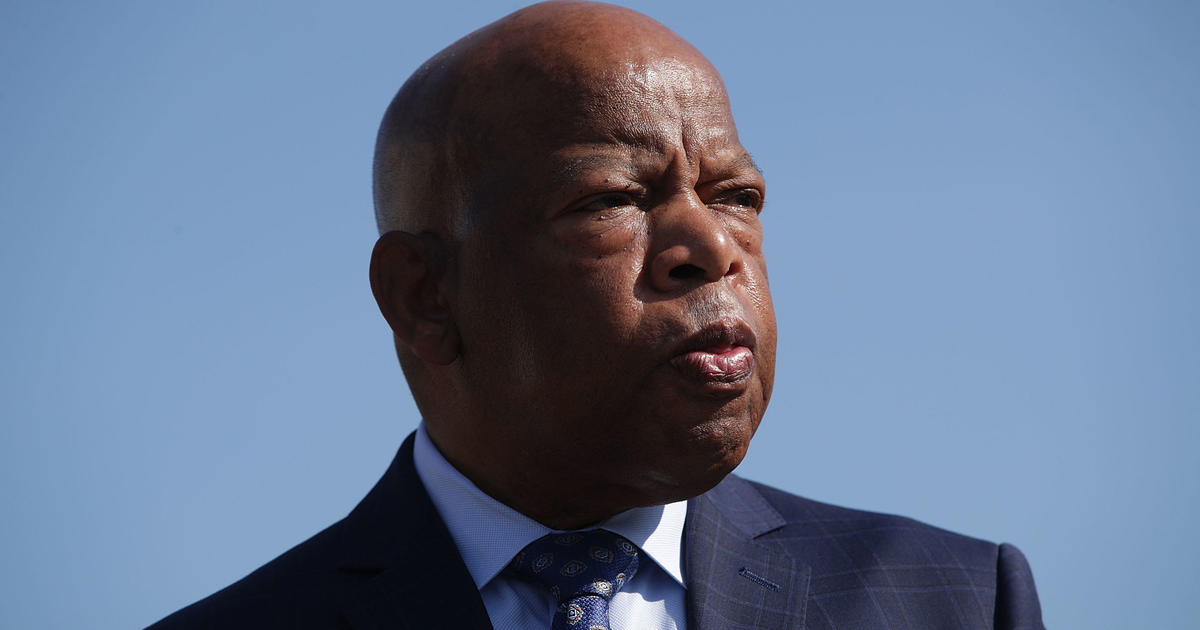 Washington — Tributes continue to pour in from former presidents, congressional leaders and other elected officials for civil rights icon and Congressman John Lewis, a Georgia Democrat who died Friday at the age of 80.

Lewis, who served in Congress for more than three decades, had been diagnosed with stage 4 pancreatic cancer. He said in December when announcing his diagnosis he had “never faced a fight quite like the one I have now.”

Former President Obama praised Lewis for his “gentleness and humility” and said the Georgia congressman lived to see his legacy play out before him in a “meaningful, remarkable way.”

“He loved this country so much that he risked his life and his blood so that it might live up to its promise,” Mr. Obama said in a statement. “And through the decades, he not only gave all of himself to the cause of freedom and justice, but inspired generations that followed to try to live up to his example.”

Lewis, Mr. Obama said, “believed that in all of us, there exists the capacity for great courage, a longing to do what’s right, a willingness to love all people, and to extend to them their God-given rights to dignity and respect.”

“And it’s because he saw the best in all of us that he will continue, even in his passing, to serve as a beacon in that long journey towards a more perfect union,” Mr. Obama said.

Former President Bill Clinton and former Secretary of State Hillary Clinton said that with Lewis’ passing the country has “lost a giant.”

“John Lewis gave all he had to redeem America’s unmet promise of equality and justice for all, and to create a place for us to build a more perfect union together,” they said in a joint statement.

“As a young man marching for equality in Selma, Alabama, John answered brutal violence with courageous hope. And throughout his career as a civil rights leader and public servant, he worked to make our country a more perfect union,” Mr. Bush said in a statement. “America can best honor John’s memory by continuing his journey toward liberty and justice for all.”

Lewis skipped both Bush’s and President Trump’s inaugurations in 2001 and 2017, respectively. For Mr. Bush, Lewis’ office said in 2017 the congressman didn’t believe the outcome of the 2000 election, which was ultimately decided by the Supreme Court, “reflected a free, fair and open democratic process.” For Mr. Trump, Lewis said at the time he did not view him as a “legitimate president” because of Russia’s interference in the 2016 election.

President Trump issued a proclamation on Lewis’ death that ordered flags at the White House and on federal property to be lowered to half-staff Saturday morning. Later in the day, he tweeted “saddened to hear the news of civil rights hero John Lewis passing. Melania and I send our prayer to he and his family.”

Lewis joined the Freedom Riders at 21 years old and was the youngest — and last surviving — speaker at the March on Washington in 1963. He led the march in Selma, Alabama, across the Edmund Pettus Bridge on March 7, 1965, which became known as “Bloody Sunday” when police beat demonstrators including Lewis, whose skull was fractured.

Lewis was an advocate for civil rights throughout his life, including during his political career, which began in 1981 when he was elected to the Atlanta City Council and then to Congress in 1986.

Senate Majority Leader Mitch McConnell, a Republican from Kentucky, praised Lewis as a “pioneering civil rights leader who put his life on the line to fight racism, promote equal rights, and bring our nation into greater alignment with its founding principles.”

“Dr. King famously said ‘the arc of the moral universe is long, but it bends toward justice.’ But progress is not automatic,” McConnell said in a statement. “Our great nation’s history has only bent towards justice because great men like John Lewis took it upon themselves to help bend it. Our nation will never forget this American hero.”

House Speaker Nancy Pelosi, a Democrat from California, called Lewis a “titan of the civil rights movement whose goodness, faith and bravery transformed our nation.”

“All of us were humbled to call Congressman Lewis a colleague, and are heartbroken by his passing,” Pelosi said. “May his memory be an inspiration that moves us all to, in the face of injustice, make ‘good trouble, necessary trouble.'”

Congresswoman Karen Bass, a Democrat from California and chairwoman of the Congressional Black Caucus, told “CBS This Morning: Saturday” that Lewis’ influence extended across both aisles in Congress.

“No matter what was going on in the House, no matter how divisive it became, there was always Mr. Lewis that would just have that moral authority that would allow us to rise up above our partisan differences,” she said.

Congresswoman Marcia Fudge, the former chairwoman of the Congressional Black Caucus and a Democrat from Ohio, recalled in an interview with CBSN that Lewis had an affinity for music, dancing and was “always fun to be around.”

“He went through an awful lot of things in his young life but what he showed us is that age is not a barrier to leadership,” she said, adding that Lewis “brought the kind of courage, the kind of inspiration that I don’t know that I’ve ever seen in my years in Congress.”

House Minority Leader Kevin McCarthy, a Republican from California, called Lewis an “extraordinary man” who made the nation better.

“He suffered for this nation, enduring what would have easily broken other men, so that future generations could enjoy the full blessings of freedom. Racism, segregation, and discrimination were not history for him; they were everyday life,” he said. “But John wasn’t just a patriot on sunny days. His patriotism urged him forward to fight for America with nonviolence and defend it with peacefulness.”

In an interview with “CBS This Morning: Saturday,” civil rights leader and former ambassador to the United Nations Andrew Young recalled Lewis as the “quietest member of the civil rights movement” who had “the power of humility that just won people over to him.”

“His life and legacy will continue to serve as an example for the generations to come,” he tweeted.

“It is rare to meet and befriend our heroes,” they said in a statement. “John was that hero for so many people of every race and station, including us. He absorbed the force of human nature’s cruelty during the course of his life, and the only thing that could finally stop him was cancer. But he was not bitter.”

The Bidens said they spoke with Lewis several days ago.

“John’s life reminds us that the most powerful symbol of what it means to be an American is what we do with the time we have to make real the promise of our nation – that we are all created equal and deserve to be treated equally,” they said. “Through the beatings, the marches, the arrests, the debates on war, peace, and freedom, and the legislative fights for good jobs and health care and the fundamental right to vote, he taught us that while the journey toward equality is not easy, we must be unafraid and never cower and never, ever give up.”

In an interview with CBSN, Antjuan Seawright, a CBS News political contributor and Democratic strategist, called Lewis a “friend” and someone he admired.