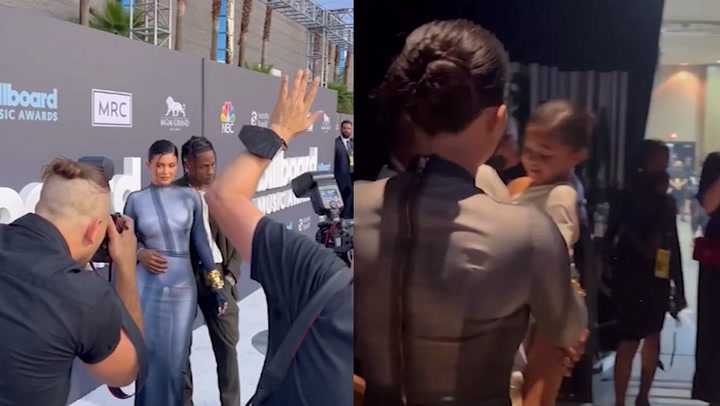 Travis Scott took to Instagram to share his appreciation of the way his partner Kylie Jenner looks.

The rapper, 31, snapped the mum-of-two from behind as she appeared to cook him a meal to mark Father’s Day on Sunday.

The 24-year-old wore a white tank top and a pair of tie-dye jeans that showed off her curves in the since-deleted snap.

She uploaded a photo of the musician lying on the bed eating a bowl of noodles while their four-year-old daughter, Stormi Webster, was fast asleep next to him.

The snap has since been deleted

Alongside the image, she wrote: “Happy father’s day daddyyyyy we love you,” to which Travis gushed back: “LOVEEE YAAA,” replacing the ‘O’ with love hearts.

Kylie has recently been open about her struggles with back and knee pain since giving birth to the pair’s second child.

She also flaunted her tiny waist as she posed for a selfie mid-workout.

Her gym post on her Instagram story last week saw the beauty mogul in workout gear, with the caption: “NO DAYS OFF!”.

Gym equipment was pictured in the background, with dumbbells, medicine balls and yoga mats all on show. A fridge fully stocked with juices, water and red bulls were also in the boomerang video.

Her final photo saw the Kylie Cosmetics founder walking on a treadmill as she revealed she has struggled since postpartum.

Travis posted a snap of Kylie to his Instagram

She wrote: “Four months postpartum. I have been dealing [with] tons of back and knee pain this time so it slows down my workouts but I am on a mission to get strong again” followed by praying hands emoji.

She also opened up about why she decided to delete social media from her phone in the run-up to the birth of her second child, saying it helped her to “zen out”.