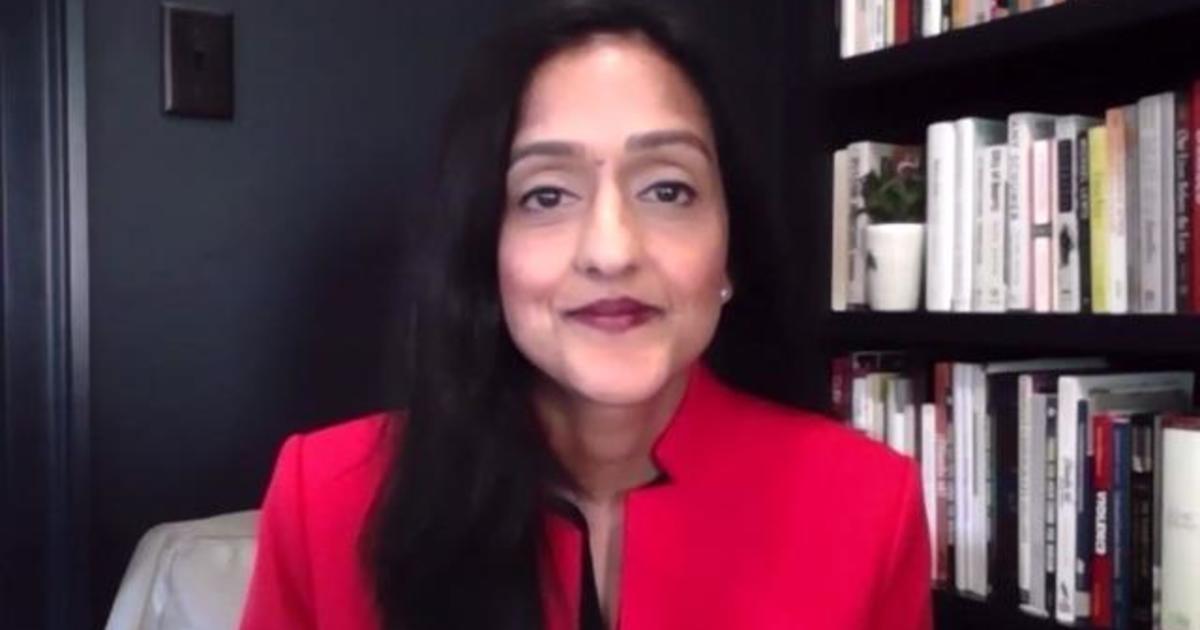 The following is a transcript of an interview with Vanita Gupta that aired Sunday, August 2, 2020, on “Face the Nation.”

JOHN DICKERSON: We want to go now to president and CEO of the Leadership Conference on Civil and Human Rights, Vanita Gupta. She was the head of the Department of Justice’s civil rights division during the Obama administration. She’s in Arlington, Virginia. Good morning.

JOHN DICKERSON: So White House Chief of Staff Meadows says the election is going to be on the third. The president floated the idea of delaying it. What’s your response to that?

GUPTA: Well, the president can’t delay it. The date of the general election has been set by federal law ever since 1845. We have voted through the Civil War, through the Spanish flu, through the Great Depression at the date set by the general election. The date can only be moved by Congress. And I highly doubt that Speaker Pelosi and the Democratic controlled House are- are ever going to touch that. So this election is happening on November 3rd.

JOHN DICKERSON: The president is raising the complexity of voting in the era of COVID as a way to raise questions about the outcome of the election. What do you see as the challenges that we should keep our eye on between now and Election Day?

GUPTA: Yeah, look, the states- you saw what happened in Wisconsin and Georgia and other states in the primaries. Those were really wake up calls for what states need to do. States need to immediately start changing the rules. We need expanded vote by mail with things like prepaid postage stamps. You’ve seen and heard about the attacks on the US Postal Service that are causing delays. Therefore, it’s really important that states change the rules to allow ballots that are postmarked on or before Election Day to be counted. It’s really important also that people apply for their absentee ballots and vote early so as not to overwhelm the system. You need expanded in-person voting because a lot of people in this country, voters of color, Native American voters, voters with disabilities won’t be able to- or won’t feel comfortable voting by mail. So you need health compliant polling places that, you know, you need PPE. All of this stuff costs money. You need extended online voter registration. These are the myriad of changes that states are making around the country. The problem is right now is Congress has failed to give the states the adequate resources that they need to be able to make all of these changes. These changes are expensive, and states are strapped for cash right now. And so inn the HEROES Act, which passed the House about 10 weeks ago, they had allotted 3.6 billion dollars. It was pursuant to an extensive study done by the Brennan Center about what it would take. And now the Senate and the House need to pass this legislation and get that money into the hands of the states so they can be ready to make all of these changes immediately. Time is of the essence. And then I would just say, JOHN, this is new. In 2018 one in four voters voted by mail. You need massive voter education around the country. That’s also going to cost money. And we need to be fighting disinformation on platforms like Facebook and others.

JOHN DICKERSON: In advance of any of those changes, they’re having difficulty even getting unemployment assistance in Congress. So bigger changes, the prospects seem dim. But in advance of that, is there anything citizens can do to educate themselves in advance of the election and these possibly changing rules?

GUPTA: Absolutely, there’s a lot of sites that are providing information: andstillIvote.org is one, vote.org is another. It is really important right now as states are making these changes that- that voters apply for their absentee ballots early, that they fill them out carefully and that they then send them back early so as not to overwhelm polling places on the day of election on November 3rd. And we also, the media has to be prepared. Look, we’re in an unprecedented time. We may not- we’re not going to be able to call the election, the media won’t be able to call the election on the night of November 3rd if we actually want these absentee ballots to be counted. And people will be voting in droves, tens of percentage points higher by mail than before. We want to make sure all of the ballots are actually counted. And so we also have to become used to this notion that we may not- we are not going to have those results. But we’re going to- secretaries of state need to be able to do their job and to certify their results. And they’re- and then the Electoral College will meet in December, and- and the transition will happen in January, if there is one.

JOHN DICKERSON: So prepare- prepare for an election season rather than an Election Day. And in that case, delay is not necessarily a sign of fraud. In some cases, it may be a sign of extra work being done to make sure there isn’t fraud.

GUPTA: Yeah, look, there’s states like Colorado, Utah, Washington, Oregon, Hawaii, they’ve been using vote by mail, majority of their voters, in some places almost exclusively, without a single hitch, and hundreds of millions of votes have been cast. There’s study after study shows that this is a very reliable form of voting. And voters need to be able to cast their votes. They should do it early. But- but, yes, election results won’t be available that night. We have to be OK with that. The most important thing is that the votes are actually counted, that people, voters of color and others don’t have- they tend to have absentee ballots rejected at a higher rate. So we’ve got to be really mindful of this. But- but this is an important and safe and secure way of voting, and we can do this. The United States of America can do this in 2020 even amid a pandemic.

JOHN DICKERSON: All right, Vanita Gupta, thank you so much for being with us today.

« Marines call off search for 8 missing; all presumed dead