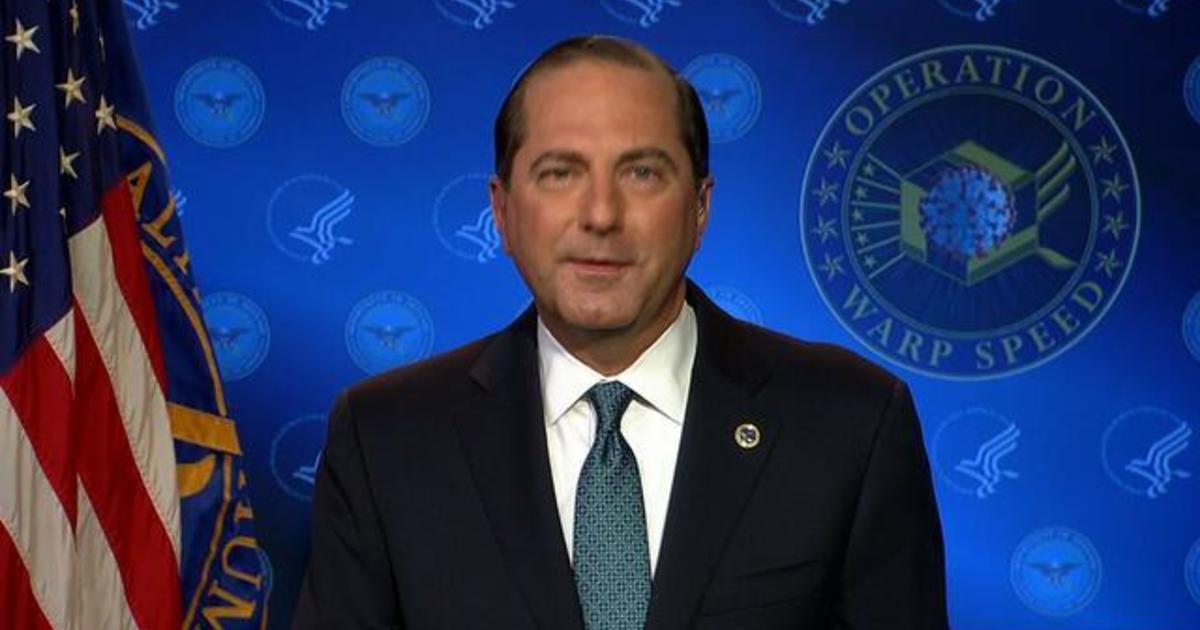 The following is a transcript of an interview with Health and Human Services Secretary Alex Azar that aired Sunday, December 13, 2020, on “Face the Nation.”

MARGARET BRENNAN: We want to go now to the secretary of Health and Human Services, Alex Azar. He’s at HHS. Good morning to you, Mr. Secretary.

HEALTH AND HUMAN SERVICES SECRETARY ALEX AZAR: Good morning, MARGARET. Thanks for having me.

MARGARET BRENNAN: Operation Warp Speed told Pfizer to ship out just short of three million doses this week. Then hospitals and the recipients will vaccinate their workers. How many actual shots in the arm do you expect to have happen this week?

SEC. AZAR: So we’re shipping 2.9 million doses of vaccine. So whenever they get them in arms, that’s 2.9 million people getting vaccinated. We’re reserving that second dose of vaccine–

MARGARET BRENNAN: You expect that to be–

SEC. AZAR: –so they can get that later.

SEC. AZAR: I didn’t say this week. As soon as they’re able to vaccinate.

SEC. AZAR: Now, I- I will say, as the health commissioner in South Carolina said, we’re going to be using this vaccine, not storing it. So I think it’ll go pretty quickly.

SEC. AZAR: Yeah, no, we’re not actually asking the nursings- nursing homes to wait. And we were able to have a really good discussion with CVS leadership about this misunderstanding that they had at the president’s vaccine distribution summit. So I think we’ve gotten that all straightened out with them. And we’ll be getting CVS and Walgreens vaccinating our nursing home people. A hundred- almost 100% of our nursing homes have signed up with that program for a turnkey vaccination operation. And you know what’s amazing is by Christm- by–

MARGARET BRENNAN: When will that start then?

SEC. AZAR: Well, they- it can start really any day. The vaccines are going out as soon as they receive vaccine. This is according to the governors telling us to ship to them, we could have every nursing home patient vaccinated in the United States by Christmas. It’s really a remarkable, remarkable prospect for all of us who have loved ones in nursing homes to- that we may approach Christmas with that level of comfort that- that our- that our loved ones have gotten some initial protection already.

MARGARET BRENNAN: Certainly, given that 50,000 nursing home patients are getting infected a week, let’s watch and see when those begin. We will- we will track that. But overall, for the general population and these shipments, why the decision not to be more aggressive out of the gate? Are you concerned that the governors who will be receiving and then in charge of distributing it, that the states aren’t quite prepared?

SEC. AZAR: No, not at all. So we’re being very aggressive. We’re shipping all that we have that- while we’re holding back a reserve for the second dose. You know, this is a vaccine that is labeled for two doses–

MARGARET BRENNAN: You have- aren’t there more than six million doses produced by Pfizer at this point?

SEC. AZAR: So- so they’re about- they’re about 6.4 million doses. So we’ve held a reserve, which, as General Perna has discussed, we- with the first shipment, it’s important to keep a safety stock there. And we’re shipping half of the remaining, so that’s 2.9 million doses going out. Listen, this is about measuring twice, cutting once. We’re launching a very complex nationwide distribution program. Do it right, do it measured, get the job done right, anticipate problems, but know they’re going to be hitches and hiccups as we go and we will work to solve it. This is the US military that is running this operation. It’s what they do. We’re using the private sector entities. As they said at the summit, this is what we do. They know how to do this and let’s let them do their jobs.

MARGARET BRENNAN: So you still expect to vaccinate 20 million people by the end of the month, even though you just shipped out three million doses this week?

SEC. AZAR: Oh, sure. Yes. We- so we’ll be getting more and more Pfizer product. And we’ve got 12.5 million of Moderna product, assuming that we get approval at the end of this week on Moderna, that we’ll ship out very soon thereafter. So yeah, 20 million vaccinations this month. And then we think we’ll be up to 50 million total vaccinations of- of people–

SEC. AZAR: –by the end of January and 100 million shots in arms by the end of February just with the Moderna and Pfizer vaccines.

MARGARET BRENNAN: Right. I mean, you won’t be in office then, but you believe the Biden administration will be able to meet that mark?

SEC. AZAR: If- if they carry forward with the plans that we’ve put in place, 100 million shots in arms by the end of February is very much in scope.

MARGARET BRENNAN: OK. So I know you’re relying on governors to oversee what happens with their constituents. If a state, though, is moving too slowly, will you claw back the vaccine that U.S. taxpayer money purchased?

MARGARET BRENNAN: Can you do that though?

SEC. AZAR: Yeah, absolutely- no- well, could we pull it back? I don’t even want to talk like that. Our governors are very competent. They know what’s going on in their states. We’ve worked with them through this for 11 months. We’ve planned for six months on this now. No- we’ll- this is a cooperative relationship, but we’ll work with them to help them give them any tools–

SEC. AZAR: –they need to to make this work. That’s the attitude to approach this with, I think.

MARGARET BRENNAN: Okay, because a lot of the governors have chimed in with this report that the National Governors Association released in the past few days, raising concerns that they’re not getting enough support. In fact, they say they need 8.4 billion dollars to be able to do this. They’ve only been promised about 200 million. Isn’t it–

MARGARET BRENNAN: –the Trump administration’s responsibility to help get them the money to execute?

SEC. AZAR: Well, MARGARET, we are getting them the money. They actually have- New York- to give you an example, as of a week ago, New York state and New York City haven’t drawn down a penny of the money that we’ve made available for the vaccine distribution efforts. I think we’ve had one percent of the moneys available, drawn down. And part of that is there’s a bit of partisanship going on, let’s be honest, with this NGA thing. What- what’s happening is we bought the vaccine. They don’t have to pay for vaccine. We’re paying to distribute the vaccine. We and private payers are paying to administer the vaccines. We have set up turnkey operations with pharmacy programs to administer the vaccines. The states need to operate as air traffic controllers. I’ve been in South Carolina with the governor’s team. I’ve been in Tennessee with the governor’s team. Money’s not the issue and they’ve got very good plans. And but–

MARGARET BRENNAN: Well this is a bipartisan–

SEC. AZAR: –money’s not- money won’t be the barrier.

MARGARET BRENNAN: –group as you know that says they need the money. Twelve states say they need more federal guidance on data reporting, training, communications. Twelve states say they’re waiting on information from the federal government on distribution. Seven states are concerned about funding from the federal government. Others say they need more federal coordination among the pharmacies to roll out at the long term care facilities, the nursing homes we talked about. Why hasn’t this been worked out?

SEC. AZAR: MARGARET, it has been worked out. There’s just a lot of partisan sniping going on right now when we ought to be celebrating the fact that we’ve got millions and millions of doses of FDA safe and effective vaccine going out. Our governors have this. We’ve worked out, on all 64 public health jurisdictions in this country, we’ve worked out comprehensive plans. We have provided feedback back and forth. At the actual technical level this is working. It will work. It’s under control. We’re leveraging the private distribution system that works every year for flu vaccines and other vaccines. The people involved, DOD, CVS, Walgreens, FedEx, UPS, McKesson, what they said on Wednesday at the summit is this is what we do. Let us do our jobs.

MARGARET BRENNAN: Right. Again, this is a bipartisan group. The president signed an executive order Monday saying that it would- he would prioritize Americans by not allowing the drug to be exported until after Americans have been vaccinated. How is that actually going to work? Are you going to seize supply?

SEC. AZAR: So the executive or- actually the first part that you referred to is always going to be the case. We’re always going to make sure that Americans are getting vaccinated first with the fruits of operation warp speed. The interesting part–

MARGARET BRENNAN: So are you going to stop Pfizer from exporting its vaccine to our allies?

SEC. AZAR: MARGARET, we will ensure that we- our contracts are fulfilled here in the United States. But the important part was the second part. That was actually the new part, which said we have 900 million doses under guaranteed contract for the United States. We have total options and guaranteed purchase for three billion doses. We have significant manufacturing capacity. And what the executive order says is we’re going to make those surplus doses and we’re going to make that capacity available to our friends and allies around the world. And the secretary of state and I are to build a plan to make that happen. That was actually the news out of that executive order that people aren’t noticing is we’re going to always be–

MARGARET BRENNAN: Okay, so exports will continue. Thank you, Mr. Secretary, for your update and good luck. We will be back in just one minute with more FACE THE NATION. Stay with us.