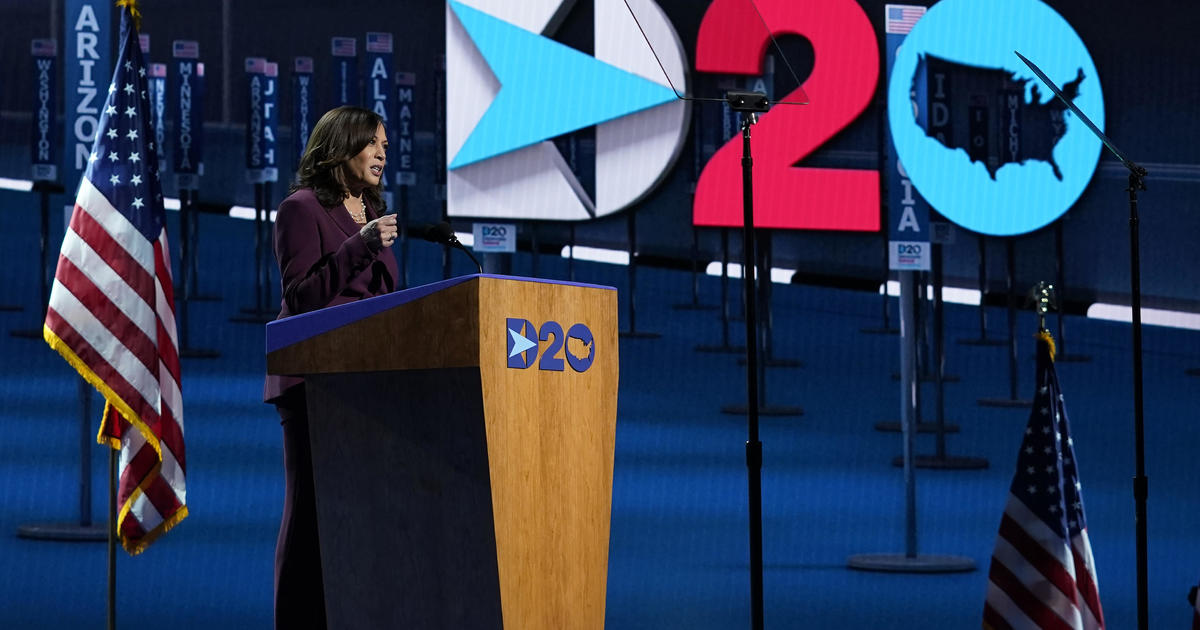 These are the women who introduced Kamala Harris at the DNC

Kamala Harris made history Wednesday at the Democratic National Convention as the first Black woman and first Asian American to accept the vice presidential nomination. In a nod to the historic nature of her candidacy, she was introduced by a trio of women important to her: her sister Maya Harris, her niece Meena Harris and her stepdaughter, Ella Emhoff.

These are the women who introduced her:

Maya Harris kicked off her introduction by saying Kamala Harris is “my big sister, which means you will always be my older sister.”

Maya and Kamala are very close — Maya even officiated Harris’ 2014 wedding to Douglas Emhoff, according to the San Francisco Chronicle.

“Growing up, heaven help the poor kid who picked on me because my sister would be there in a flash to have my back,” Maya said. “Now we’ve got your back as you and Joe fight to protect our democracy.”

Maya was the campaign chairwoman of Harris’ presidential bid. She also served as an adviser on Hillary Clinton’s 2016 presidential race and, prior to that, headed up the northern California chapter of the American Civil Liberties Union. She graduated from Stanford Law School and the University of California-Berkeley.

“I think most people who know Maya will tell you she’s one of the smartest people they know,” Kamala said in an interview last year with Politico. “The fact that she has volunteered to work on this campaign at such a high level, and she’s exactly who she’s always been — she works around the clock and she’s probably the hardest, if not one of the hardest working people on the campaign — I feel very blessed.”

Maya gave birth at age 17 to her daughter, Meena Harris. Meena was four years old when she introduced Maya to her husband, lawyer Tony West, after Meena had played a game of hide-and-seek with him at Stanford, according to the Stanford Lawyer.

Earlier this year, Maya announced she has been battling lupus for the past three decades.

Meena Harris affectionately called Kamala Harris her “auntie” during the DNC. “You’re my role model, who taught me I could do or be anything I wanted,” Meena said.

Like her mother and aunt, Meena is a lawyer. She graduated from Stanford University and received her law degree from Harvard Law School.

But she branched out on her own, launching a social justice organization called Phenomenal Women Action Campaign. She also wrote a children’s book called “Kamala and Maya’s Big Idea” about her aunt and mother.

“The inspiration in writing the book was really about celebrating the stories that I would hear as a kid that were incredibly important to me, which were these early lessons around things like community organizing, around coalition building, around leaning on your community, and creating a space for your community to come together to make it even better,” Meena told Business Insider in June.

Meena is the mother to two daughters. “And now that I’m a mom, you’re showing my daughters and so many girls around the world who look like them what’s possible and what it’s like to move through the world as fierce, formidable, phenomenal women in their own unique way,” Meena said Wednesday.

Ella Emhoff is one of Douglas Emhoff’s two children from his previous marriage. “To my brother and me, you will always be Momala, the world’s greatest stepmom,” Ella said Wednesday.

“You’re a rock, not just for our dad, but for three generations of our big, blended family,” she said, adding that there will be “no union more perfect” than the one that brings them to the kitchen table “every Sunday night.”

Ella is a student at Parsons School of Design in New York. Kamala Harris told Elle magazine that Ella was named after Ella Fitzgerald and that her brother, Cole, was named after John Coltrane.

“They are brilliant, talented, funny kids who have grown to be remakable adults,” Harris said in the Elle interview. “I was already hooked on Doug, but I believe it was Cole and Ella who reeled me in.”

On Mother’s Day in 2019, Harris posted on Instagram “grateful everyday to be Momala to Ella and Cole.”

Grateful every day to be Momala to Ella and Cole.

Read More: These are the women who introduced Kamala Harris at the DNC

« Manifold Garden Is A PC Puzzle Experience Being Ported To Nintendo Switch, PlayStation 4, and Xbox One