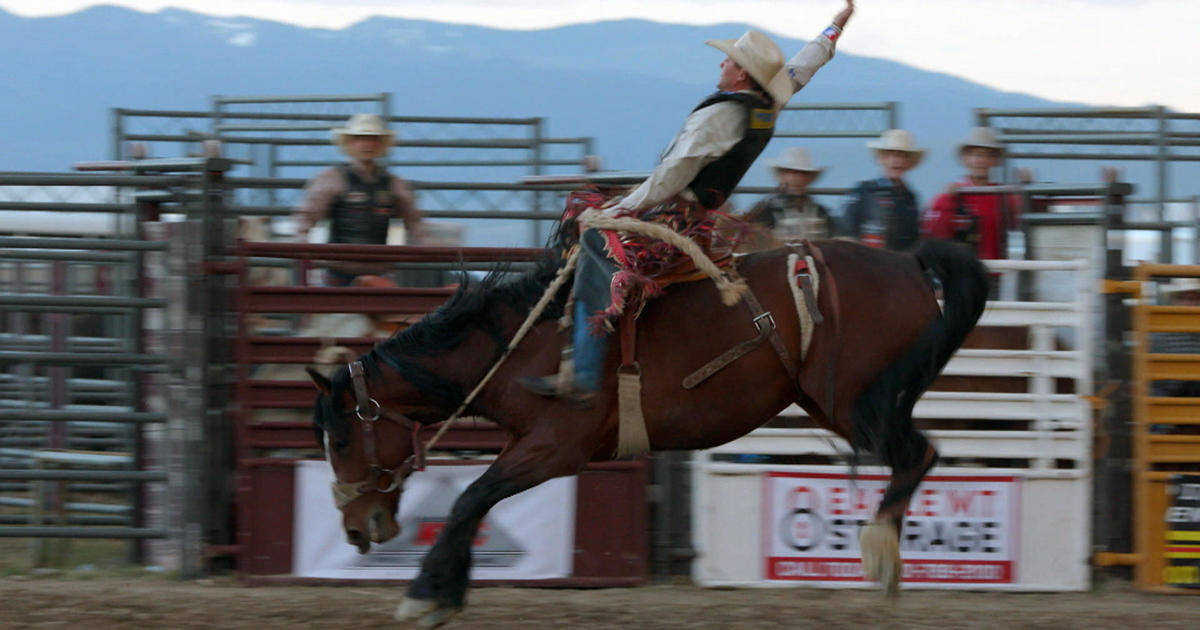 The Wrights: A family of saddle bronc riders

Rodeo might just be America’s original pastime. It started with an event called saddle bronc in the Old West. Today, there’s one name that dominates saddle bronc: the Wrights. Like every sport in America, rodeo has been disrupted by the coronavirus pandemic, but when we first brought you this story in November, there were nine members of the Wright family riding the circuit and they ranked among the best in the world. In a sport with plenty of wannabe cowboys, as you’ll see and hear, the Wrights are the real deal – vestiges of the American frontier. Their lifestyle has prepared them for what’s been called one of the last blue collar sports in America. In saddle bronc, there are no Tom Brady salaries and there are regular injuries that would make running backs flinch. And yet, none of that discourages the Wrights. Each generation seems to be better than the last. Tonight, you’ll meet America’s first family of rodeo, competing for glory on horseback the Wright way.

Rodeo lessons: Getting a firsthand look at the cowboys of saddle bronc

You may not have heard of the Wrights before, but at rodeos big and small across the country, like this one in Utah, that last name is as famous as Manning or Montana. And there are just about enough Wrights to field their own football team.

Nine professional cowboys with five world titles among them.

There’s Ryder Wright, the youngest world champion of all time, and at 21, currently sitting in first place.

His uncle is this guy, Spencer Wright, another world champion.

And in a league of his own, Cody Wright, the one who started the family dynasty 20 years ago.

At 42, Cody’s a two-time world champion and one of the best bronc riders ever.

Cody Wright: Adrenaline. A little bit of fear. And you gotta learn how to control it. You know, otherwise, you know, it go-to heck pretty quick.

In saddle bronc the goal is to hang on with style for eight seconds, to a horse specially bred to buck you off.

Bill Whitaker: Can you explain to us what’s going on in that eight seconds?

Cody Wright: You’ve got a rein you hang on to. You need to lift on it, ’cause that’s what holds ya down in the saddle. When they jump and kick, you know, they’re stretched out, their feet are off the ground, You wanna be stretched out, you know, your free arm straight back, and your feet set as high in the neck as you can get ’em.

Bill Whitaker: It’s like one hell of a rocking horse.

Bill Whitaker: So are you– are you kind of dancing with the horse?

Cody Wright: I like to think you are. I dance a lot better with a horse than I do with my wife. (LAUGHTER) I ain’t got no rhythm. The Wrights and the broncos they’re randomly paired with are partners in the rodeo. Both have to perform well to get a good score from the judges.

But when it’s go-time, the Wrights, the sons and brothers, crowd around the chute like a NASCAR pit crew, helping each other saddle up.

Bill Whitaker: This is a team sport for you guys.

Cody Wright: I think so. I love it. There’s nobody I’d rather see do better. But don’t– don’t think that I ain’t trying to beat ’em. (LAUGH)

Jake Wright: We all show up to the rodeo wanting to win first, but, and, but we’re gonna help each other do it too.

That’s Jake Wright, Cody’s younger brother and one of his toughest competitors. And yes, there are more brothers: Jake’s twin, Jesse, a brother-in-law, Coburn Bradshaw, plus Alex, Calvin, Stuart and Spencer Wright.

Spencer Wright: We’re like a big support group. You know, there’s ten of the best bronc riders right in– in the world right here, We all get together and practice.

Spencer Wright: And I know that’s why we all have been so successful at what we do.

All that practice has propelled them to the National Finals Rodeo in Las Vegas. It’s the cowboy Super Bowl and team Wright has made it every year for the last decade and a half. Cody has won the champion’s gold buckle twice.

Jake Wright: He showed us that we could do it with a little hard work and a lotta try.

Spencer Wright: If he woulda never even pursued rodeo, I wonder what the rest of us would even be doin’. (LAUGH)

What they’re doing comes at a steep cost. While these horses are rarely injured, that can’t be said for the Wrights. They all have the same orthopedic surgeon on speed dial.

Bill Whitaker: Can I see a show of hands of how many of you’ve been injured?

Bill Whitaker: So all of you’ve been injured? And two of you came into this interview on crutches. (LAUGH)

Jake Wright: Three of us. (LAUGH)

Bill Whitaker: Tell me some of the injuries.

Jesse Rondo Wright: I think the worst was my back, when I broke my back in Omaha.

Spencer Wright: I broke all the sinuses on this– right side of my face one time and had a brain bleed. As far as injuries goes, I think I’m one of the lucky ones sittin’ here.

Bill Whitaker: Do you hear yourself? Brain bleed? (LAUGH) And you call that lucky?

But heartache won’t land you in the hospital. The Wright boys are well aware every ride could be their last. Stuart came close.Stuart Waylon Wright: I said, “Let’s go.” And horse reared up and hit my head. Kinda knocked me a little senseless. And I fell off into the arena. He just jumped straight up and fell completely on me. Thought it broke my back because I just felt my ribs pop as he landed on me. I was like “oh my gosh!”

As awful as that may sound, the Wrights say the hardest part of the job is being away from home.

Where they eat, sleep and drive from Canada to the Mexican border chasing eight-second dreams.

Bill Whitaker: Do you sometimes feel like you’re on the road more times than you’re on a horse?

Jesse Rondo Wright: You drive 22, 24 hours from home to there. And we’re there an hour, turn around and drivin’ back. (LAUGH)Coburn Bradshaw: We drive for a livin’ and ride buckin’ horses for (LAUGH) fun.

When they aren’t on the road, home is Southern Utah. They mostly grew up in Milford, a no stoplight town where the Wrights are the main attraction.

They’re a family of 13 kids kept in line by their parents, Bill and Evelyn.

Evelyn Wright: It’s a good-sized family. Kid’s are kind of “more-ish” you know; the more you get, the more you want.

Bill Wright: She trained the older ones to help the younger ones.

Evelyn Wright: –I had to organize ’em.

Bill Wright: But she-

Evelyn Wright: I’m like, “I cannot do this on my own. Or else it’s gonna be bad, ’cause Mom’s gonna grow bear hair and you’re not gonna like it.”

The Wright kids were cowboys playing cowboys and were natural ranch hands. It kept them out of Evelyn’s hair and out of trouble. The seven boys and six girls knew how to ride a horse before they could peddle a bike. Some of the girls rodeo’d too, but never went pro.

Evelyn Wright: They learned how to break horses early, how to ride and tame horses and train ’em. I think you have to be a cowboy before you can be a rodeo cowboy.

The ranch was their training ground. The family has been working this land at the edge of Zion National Park for more than a century and a half.

Bill Whitaker: Bill, do you think the Wright family will be ranching this land in another 150 years?

Bill Wright: Well I hope so, I really do. When you work as hard on something as I have at this, you don’t want to see it just go away.What keeps their way of life going are rituals like this: branding day.

Bill and his children, grandchildren and great-grandchildren gather every year to round up, vaccinate, and brand their cattle.The hard work brings them together; it defines them on the ranch and in the arena.

Cody Wright: Dad’s the first one to preach that you get out of it what you put into it. And if he’s seen you putting something into it, they were both behind you. And it didn’t matter if they had to sell the– the farm. They was gonna get you there.

Bill Whitaker: They sacrificed– a lot for you to reach your dream.

Cody Wright: I think so. Um…

This cowboy gets emotional because he knows exactly how much his parents gave up when he was starting out, in a family where money was tight.

These days, Cody may be living his dream, but it hasn’t exactly made him rich, considering cowboys have to foot the bill for just about everything.

Cody Wright: If you’re rodeoing full time, and going to you know a hundred rodeos, you’ve gotta make over $60 or $70,000 just to break even.

Bill Whitaker: So you could go through all this and go to a rodeo and walk away with nothing.

Cody Wright: Yeah. You could walk away in the red.

Bill Whitaker: Less than nothing.

Cody Wright: Less than nothing. (LAUGH)

Bill Whitaker: So surely there are easier ways to make a living.

Still, the sport has taken a toll on Cody’s body and his family. He’s spending less time in the arena now and more time on the ranch.And in the practice pen, leading the next generation to carry on the Wright legacy. Sons Ryder, Rusty, Stetson, who are already rising stars, and the youngest, Statler. We were there the day Cody coached his 16-year-old on his very first bronc ride.

Statler Wright: Well, I was, like, super nervous until I got in there. And then I just pretty much forgot about everything else but what my dad’s taught me.

Statler Wright: I hurt my butt actually (LAUGH) a lot. But as soon as I hit the ground, I wanted to do it again.

Bill Whitaker: One hall of famer told us that you guys have the potential to be the best there ever was.

Rusty Wright: I think we could do it. But really that’s kinda humbling and, it lights a fire.

A fire, they say, to win those gold buckles, just like their dad, Cody.

Cody Wright: You know, I wanted a gold buckle. But to ride every horse the best I could was always what did it for me, you know? Sure I want money. Who don’t? You need it to go along. But I always just wanted to ride broncs. It was striving to make that perfect ride. And you know, the feeling that you feel when you’re in time with a horse that’s trying to get you off their back as hard as they can.

Bill Whitaker: Have you ever had a perfect ride?

Cody Wright: No. I’ve never had a perfect ride. (LAUGH) When I make that perfect ride, I’m gonna be done.

After our story aired, the family added one more world championship to its collection – Stetson Wright won his first gold buckle for All-Around Cowboy at the National Finals Rodeo in December.

Read More: The Wrights: A family of saddle bronc riders