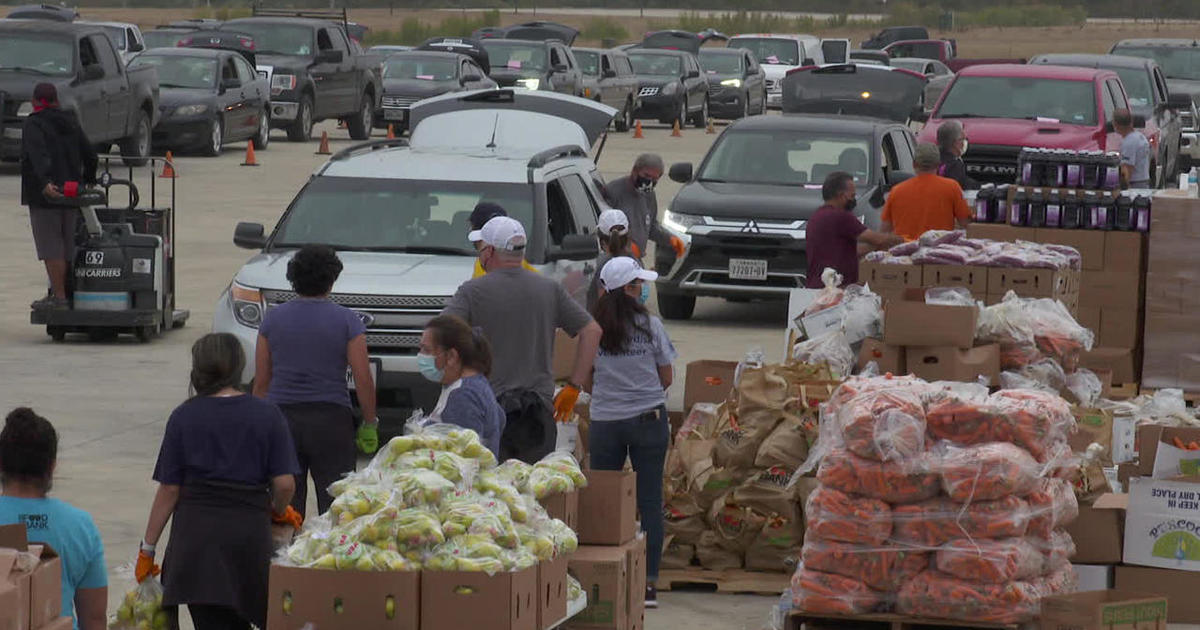 The rise in Americans’ food insecurity

As a staff photographer for the San Antonio Express-News, William Luther may have done more to help hungry Americans this Thanksgiving than anyone will ever really know.

“We were hearing from politicians that they were calling each other saying, ‘Have you seen the picture?'” he told correspondent Lee Cowan. “And they didn’t have to describe it. They already knew what – ‘Did you see the picture?'”

The picture he’s talking about is this drone shot taken back on April 9, high above some ten thousand people, their cars parked bumper-to-bumper in a vast San Antonio parking lot, waiting for food.

The image went viral. “I think it really helped put clarity on something that was really difficult for people to understand,” Luther said.

If there was any doubt that COVID has deepened America’s hunger crisis, that picture dispelled it.

Folks at the San Antonio Food Bank, as well as its hundreds of volunteers like Paul Drummond, haven’t seen the lines stop yet.

“It’s the kind of thing that you keep thinking it’s gonna be over, and not only is it not over, the need just grows,’ Drummond said.

A food distribution line at the San Antonio Food Bank. During the pandemic, many have been relying on food banks for the first time to feed their families.

There have been thousands of other food distributions all across the country, like a massive one in Dallas/Fort Worth just this past week. What all these lines have in common is that many of the people have never asked for food before.

Cowan asked one recipient, Don, “What would you do without them, you think?”

“Well, probably go starting growing my own food in the backyard, probably!” he laughed.

“We are relying, I think too much, right now on the charity food system,” said Diane Schanzenbach, the director for the Institute for Policy Research at Northwestern University. She found that in the first few months of the pandemic, the number of Americans who didn’t have enough to eat surged, from around 8 million to nearly 30 million.

“This has revealed some big holes in our safety net,” Schanzenbach said, “but they are holes that Congress can fix.”

Since the pandemic started, as many as seven million people have enrolled in the federal government’s food stamp program (now called SNAP). Schanzenbach said Americans need at least a 15% increase in those benefits to survive, but negotiations over the next COVID relief package are stalled in a lame-duck Congress.

“Do they not believe that so many people are hungry?” Schanzenbach said. “Have they not gone out to see what is happening at these food banks and food pantries?”

Those impacted the most are Black and Latino Americans, especially those with children.

Katherine Wynn, a mother of five, lost her job as a housekeeper in San Antonio during COVID. “You have to, like, decide if you’re going to pay a bill or not, or decide to go get groceries and maybe your water or your lights might get turned off the next month or something,” she said. “It’s down to that now.”

Hardship is nothing new to San Antonio. Since 2013, the overall poverty rate for the city has hovered between 18-20%. That’s nearly twice the national average.

In 1968, a CBS News documentary, hosted by Charles Kuralt, put the city’s struggles with hunger right in everybody’s living rooms. The hour-long special offered an unflinching look at hunger in the richest country in the world.

Hunger In America, A 1968 News documentary

Cameras captured when a young boy named Jerry told Father Ralph Ruiz, a Catholic priest who lived and worked with the poorest of San Antonio’s Mexican-Americans, that couldn’t afford the 35 cents for lunch at school.

“The poor need the assistance of those who have,” he said.

“That’s why we have to work hard, to make it change,” said Ruiz.

Cowan met him at the Inner City Development community center, which also houses a food bank. It’s a program Ruiz started after the documentary, that has fed more than three million hungry San Antonians since.

“The world is full of hungry people. You find four people, you find hunger,” he said.

A food bank at the Inner City Development community center in San Antonio.

It’s fair to say Ruiz never could have imaged the San Antonio Food Bank this busy, or this big. Its warehouse holds about two weeks’ worth of food, said Eric Cooper, the food bank’s president and CEO. He routinely walks the lines, getting to know those he serves.

One recipient said, “Without the food bank, we wouldn’t make it, sir.”

In April, he was in the midst of that endless line, apologizing to the hungry for having to wait so long.

“I wanted to make sure that those families knew that I was sorry,” he said. “And instead of being greeted with, like, ‘Yeah, we’ve been here for hours,’ I was greeted with this, like, ‘God bless you, you know, thank you…'”

Not a single family left that day empty-handed – a loaves-and-fish kind of miracle that is being performed here, and all around the country, almost every day.

Cooper said, “I think we in life go through seasons of struggle, and COVID-19 has created a lot of struggle. But this season will pass, and we just have to get through it together.”

« The rise in Americans' food insecurity

Janet Hubert Says Her 27-Years Long Feud With Will Smith Felt Like She Was In Prison! »