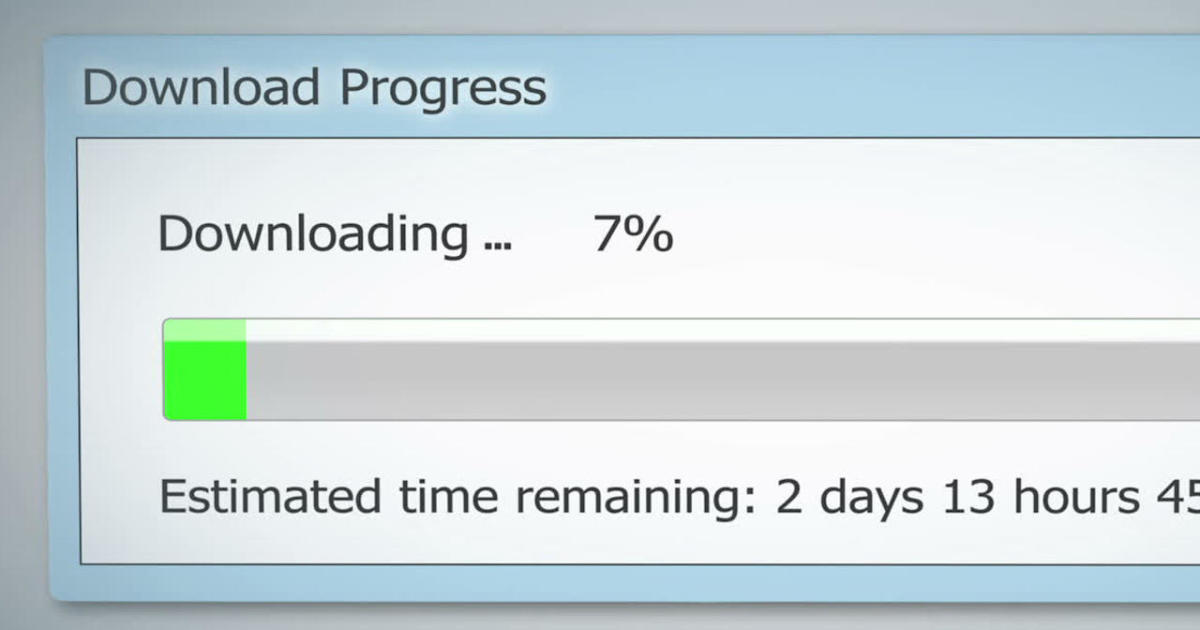 After she earned her master’s degree, writer Karie Fugett bought a little farm in rural Oregon. It seems to have everything: beauty, affordability, and just a 30-minute drive to the city. But she quickly discovered one thing that wasn’t available: “We don’t have internet!” she laughed. “We haven’t been successful getting it out here yet.”

“So, you must be able to get online somehow?” asked “Sunday Morning” correspondent David Pogue.

“When there isn’t a pandemic, I go to a library, or I go to a restaurant or a café,” Fugett laughed. “Now, since the pandemic, all of those places are closed down. If I need internet, Taco Bell has been very reliable.”

“You’re a professional writer, and to get online to do your research or your correspondence, you park at a Taco Bell?” asked Pogue.

“I do! And I don’t feel like a professional writer when I’m parked at a Taco Bell. I usually feel pretty embarrassed!”

To access the internet, writer Karie Fugett would park outside a Taco Bell to log into their wi-fi.

As modern Americans, we count among our blessings that most of us have been able to keep going during this pandemic – working, educating our kids, consulting with our doctors – thanks to broadband Internet. That is, high-speed Internet.

There’s only one problem: “Tens of millions of Americans are not connected to broadband internet,” said Gigi Sohn, who worked for the FCC during the Obama administration.

She said the number of people who don’t have broadband depends on who you ask: “If you ask the Federal Communications Commission, they’ll say it’s only something along the lines of 20, 23 million people, and that is a grossly undercounted number. Microsoft has done a study that showed 162 million Americans don’t have broadband at the speeds that the FCC defines ‘broadband.'”

If you’re scoring at home, that’s about half the population of the United States with either very slow internet or none at all.

For about half of Americans, high-speed internet – a modern necessity, especially now during the COVID pandemic – is either unavailable or unaffordable.

Sohn explained why the government’s data hugely undercounts the number of people without access: “What the FCC says is, if you can serve one person in a census block, that means you’re serving everybody in the census block.”

Census blocks are map regions that the government uses for reporting population. A census block can be anything from one city block, to hundreds of square miles in rural areas.

“Oh, I’m sure it’s not only possible, I’m sure that is absolutely the case,” Sohn replied.

But having no broadband internet isn’t the whole problem. Millions of communities have broadband, according to the FCC, but in the real world, it’s too slow to matter.

The current fastest internet download speed available in America is about 2,000 megabits per second (Mbps).

And what the FCC defines as broadband for downloading is 23 Mpbs. It’s not very fast.

People in Georgetown, Maine would love to have even that minimal speed. The FCC says this coastal community has broadband internet, because residents can sign up for DSL service. (That’s digital subscriber line, basically internet over the phone wires.)

But in practice? “It’s terrible. It is absolutely awful,” laughed Tommie Burke. “Most of the time, we have little to none. And only occasionally does it get up to mediocre! It’s really bad!”

Burke says that it got even worse once everyone started staying at home during the pandemic – and worse yet, once the summer residents arrived at their vacation homes.

“The fact that lots of people are up here now that aren’t normally here all the time, the internet is even worse,” Burke said.

As the new school year begins, many students will be taking classes remotely over the internet. But for Maine residents, like high-schooler Kiernan Mann, that’s often impossible: “Taking notes in class with the internet is pretty hard, ’cause the screen might freeze and I can’t hear anybody. And then they might just go through all the notes without me, and I have to catch up.”

In cities like Austin, Texas, so many kids weren’t online last semester that the school system had to print and mail 40,000 homework packets a week. And they resorted to filling school buses with portable Wi-Fi hot spots, and parking them near apartment complexes where a lot of people have no broadband service.

You might say: “Austin? Shining star of high-tech American cities?” But according to Gigi Sohn, Austin illustrates the biggest broadband problem of all: “The vast majority of Americans who don’t have broadband internet access, is because they can’t afford it, because the price is too high.”

And sure enough, the United States has the third most-expensive broadband internet in the developed world, mostly because there’s not much competition.

Pogue asked, “It’s just a money problem, and not a problem of putting wires in the ground?”

“Oh, we should be complaining about both,” Sohn replied. “The lack of actual network infrastructure in many places, but also the cost.”

The thing is, we’ve fixed problems like this before.

In 1934, only 11% of rural Americans had electricity. President Franklin D. Roosevelt created the Rural Electrification Administration, and within 20 years, 90% of those homes had cheap, reliable electricity.

Now, over the years, the government has come up with a basket of programs designed to help with internet affordability and accessibility. Unfortunately, Sohn said, they haven’t always worked as designed.

“The FCC has now, for well over a decade, paid out tens of billions of dollars to rural broadband companies to build internet access in places where there isn’t any,” Sohn said. “And the fact of the matter is, is that the government has gotten a very, very poor return on its investment. This FCC, and I’ll even say, you know, the FCC that I worked for, has not done a very good job of demanding that these companies tell us what they’ve actually built with the money they’ve got.”

“This is not making the FCC look too good,” Pogue said.

“I don’t think it’s incompetence; I think part of it is resources. You know, the FCC’s staff has shrunk enormously in the last decade or so.”

FCC Chairman Ajit Pai declined “CBS Sunday Morning”‘s request for an interview. But in a written response to our questions, the FCC said: “We ensure efficient, cost-effective spending” on subsidies for rural broadband.

Earlier this year, Congress passed a law requiring the FCC to improve the way it measures internet access. But the FCC said that nothing will happen unless Congress also pays for it.

“The FCC simply does not have the $65 million we need to start the process and implement that law through its first year,” Pai told the Senate Financial Services and General Government Subcommittee in June.

Meanwhile, the agency is promoting new technologies, like 5G cellular and low-Earth orbit satellites, that might address our broadband problems, someday.

But for now, most seem to agree on one thing: That especially these days, the internet should be considered a necessity.

Months into the pandemic, Karie Fugett ended up getting office space in town just to get online:

She said, “I think at this point it should be considered a utility, just like water or electricity. And especially now that we’ve experienced this pandemic, we’re seeing just how much we rely on it. The difference between someone who has internet connection and someone who doesn’t is just too wide.”