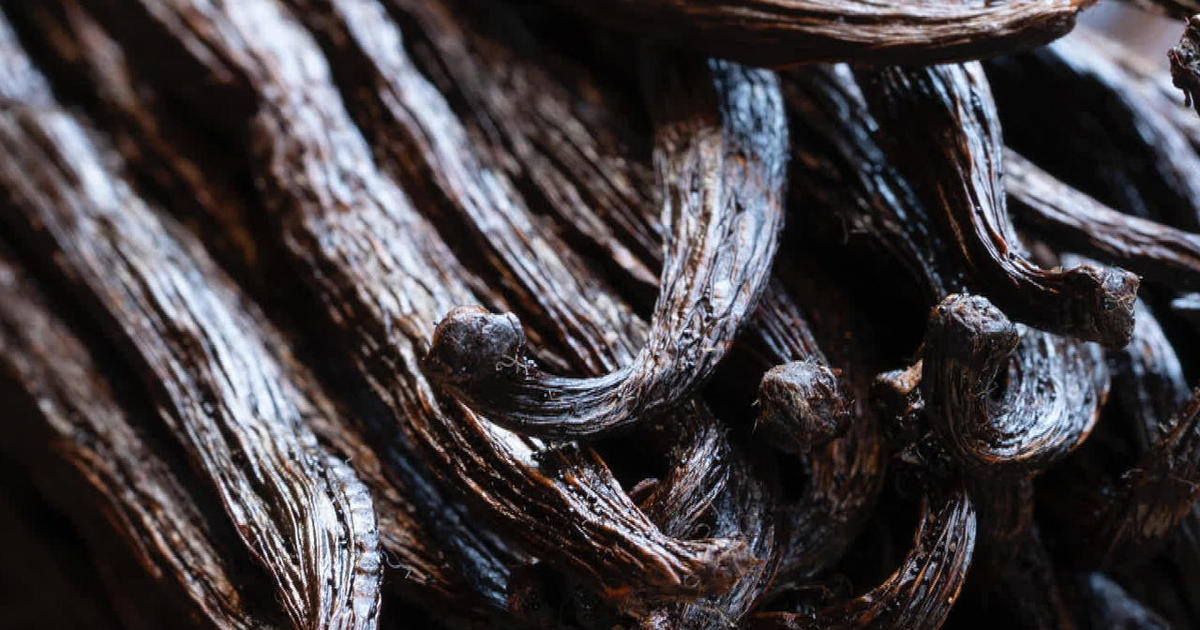 The flavorful story of vanilla

All of this quarantine cooking and baking has been a boon for at least one business you probably had not considered: vanilla. It’s a key ingredient in cakes and cookies (not to mention ice cream and even Coca-Cola). In recent months, worldwide vanilla sales have doubled.

Which gives new relevance to a story correspondent Seth Doane was working on even before the pandemic, one that took him on a journey thousands of miles away to the rainforests of Madagascar, the remote African island nation where a pale white orchid has a most colorful story.

Josephine Lochhead is not only an admirer of the plant, but she runs Cook Flavoring Company, her family business in California which has been making vanilla extract for more than 100 years.

“It makes my heart swoon!” she said of the plant. “I love vanilla!”

This spring, Cook’s saw an astounding 500-precent increase in sales. They import, literally, tons of the raw material.

Growing and harvesting vanilla is incredibly labor-intensive. Each one of the vanilla orchid’s blossoms must be pollinated by hand, before noon, the day it blooms. “We call it the ‘queen of the rainforest,'” Lochhead said.

And this queen demands constant attention.

So, when French colonists brought this vine to the region in the 1500s, it did not produce vanilla for centuries. Then, in the 1850s, the story goes that an enslaved man named Edmond Albius discovered a method of hand-pollinating, with a tiny toothpick-like stick.

A farmer named Behmanmanjar showed Doane how, exposing the female part of the stem, hidden by a membrane. Now the flower is pollinated; you just have to wait nine months, like a baby.

Now, imagine there are around 40 million vanilla orchids in Madagascar. So, pound for pound, vanilla is one of the most labor-intensive crops in the world. It’s also one of the most expensive and, by weight, can sell for more than silver.

Dylan Randriamihajha’s Madagascar Spices Company is Josephine Lochhead’s biggest supplier. His warehouse is under guard, surrounded by barbed-wire. To be able to track and trace their vanilla, farmers “tattoo” each pod while it’s still green. And once it’s harvested, there’s still more work: the vanilla beans are dipped into hot water to stop photosynthesis; then, the process of drying and curing can go on for months.

Expert hands seem to dance over the vanilla as it’s sorted and massaged, releasing oils and aroma.

“The beans are touched more than about 2,000 times, before shipping,” said Randriamihaja.

Lochhead said, “By default Madagascar is the world’s vanilla producer.”

“Because the wages are lower than any other wages in any vanilla-producing region in the world.”

While its vanilla crop is worth about half a billion dollars, Madagascar is one of the poorest countries on Earth. Most people here live on about $50 a month.

Randriamihaja says his workers a good salary – about $100 a month. And to make sure that the money being made trickles down to the workers, profits are shared with farmers directly. Serge Rajaobelina, who is from Madagascar, heads a cooperative of 4,000 vanilla farmers. They’re trying to establish systems as simple as savings accounts, and as vital as health centers and schools to help these workers get ahead.

“Poverty is the most challenging things for conservation, for the environment,” Rajaobelina said. “If you don’t deal with poverty, people are gonna look for land, and they’re gonna destroy the forest.”

Doane witnessed that destruction flying over vanilla territory, where farmers burn to expand fields in the desire to escape that grinding poverty and cash in on this crop. Half of Madagascar has been deforested since 1950, threatening habitats, including that of the lemur, which only lives in the wild on this island.

The high price of vanilla in recent years has exposed other unsavory sides to this spice.

Lochhead said, “Through the entire vanilla process, there is cheating, stealing, theft.”

When his valuable crop matures, farmer Behmanmanjar will stay in his fields all night long keeping watch. Last year, he told us, half his vanilla was stolen.

“I risk my life guarding these beans,” he said. “People might be coming to kill me.”

Incredibly, more than half of the people detained in one prison are accused of stealing vanilla, including more than 100 children.

In the capital, Antananarivo, “Sunday Morning” took hidden cameras into a tourist market to see how vanilla was hawked at high prices. At least 10% of vanilla ends up on the black market.

So, as you might imagine, that’s why Lochhead travels thousands of miles each year, to gauge the crop, meet producers, and examine the product, such as a gourmet bean with much more subtle aromas.

Vanilla, the spice of life

Now, consider this: at least 95% of products sold as “vanilla” do not require a farmer at all, nor do they contain real vanilla. The synthetic stuff can be produced in a lab for 1/20th of the cost.

But Josephine Lochhead would argue, also with a fraction of the flavor: “If synthetic vanilla were as good as pure vanilla, that would be the way to go. We wouldn’t have to go through all of this laborious, tedious, risky process.”

“Vanilla is a work of art,” she said. “You just can’t treat it like, you know, a bag of sugar. There’s so much that goes into it.”

And we’d like to think this much is certain: now at our journey’s end, we bet you’ll never think of it again as “plain vanilla.”