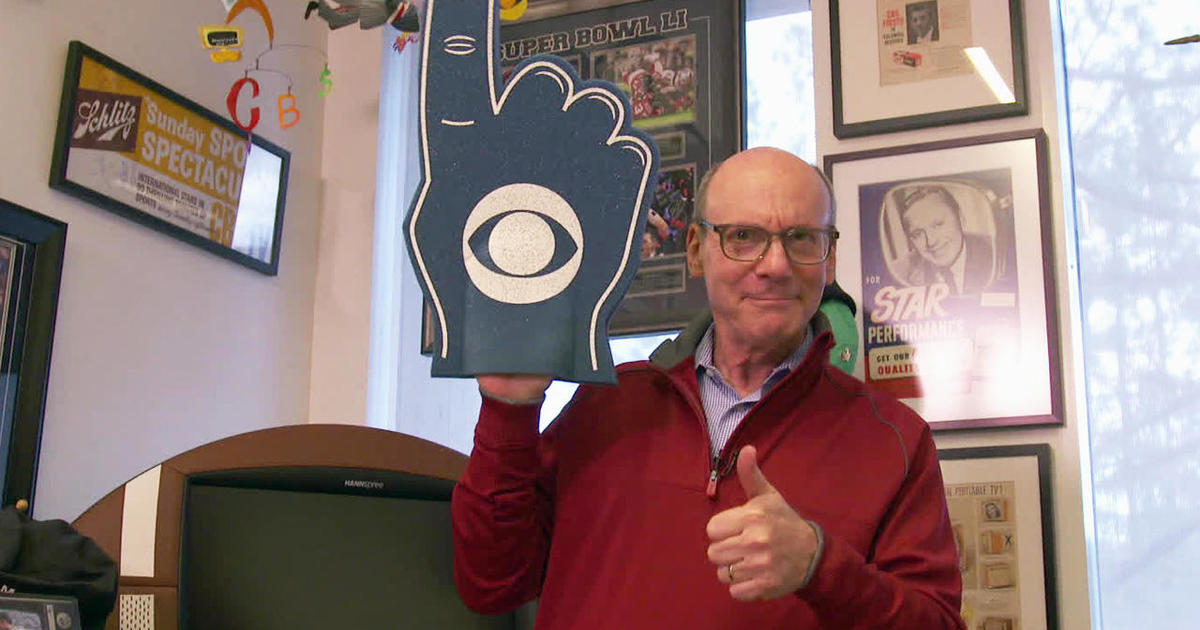 The eyes have it: Celebrating a career celebrating CBS

Not everything changes on TV. Take that eye has been staring out of our TV screens ever since 1951.

The inspiration for the CBS eye, said George Schweitzer, “was from an Amish hex sign that was on a barn in Pennsylvania – the all-seeing eye which would protect them, because it would be all-seeing.”

Now if you’re wondering if there’s a keeper of such memorabilia around here, there isn’t – not officially, anyway.

Which is where George Schweitzer comes in.

He demonstrated to correspondent Le Cowan how to make “CBS toast,” in a CBS toaster.

“It’s better to be CBS toast, than to be toast, right?” he said.

If that sounds like a marketing slogan, that’s because that’s how Schweitzer made his living. Until this past spring he was CBS’ chairman of marketing. For nearly three decades his job – a big one – has been to get your eye, on ours.

And along the way, he turned his office into a mammoth scrapbook of his efforts.

Broadcasting cast its spell early on the Schweitzer family – CBS especially. Schweitzer’s mom worked at CBS, he met his wife at CBS … heck, as a young boy he even appeared on CBS, on the game show “To Tell the Truth.”

The rest, he said, is history.

From news to sports, to kid’s shows like “Captain Kangaroo,” he did it all.

Cowan asked, “If you hadn’t collected this stuff, what would have happened to it?”

“Landfill? I don’t know,” he replied.

It was William S. Paley who founded the Columbia Broadcasting System back in 1928. He’s pretty much a legend around here, and as legend has it, this contraption was his: “This is a custom-made remote control,” Schewitzer said, unspooling a very long cord. “It was attached to the TV, which must have been pretty far away from his desk.”

In addition to old TVs, he’s got stacks of old CBS radios, too, broadcasting nostalgia. But all of the hardware meant nothing if people weren’t tuning in – and that was where Schweitzer shined.

“No matter how good a marketer you are, you can’t sell schlock,” Cowan said.

“Nope, nope. You can, but you can only do it once. You can sell schlock once!”

He helped launch 28 seasons of primetime shows, including David Letterman’s move from NBC over to CBS.

“And now an important announcement from this network’s new late show host: ‘I’m Dave and I want to be your TV friend.'”

Selling the Letterman sarcasm instead of being afraid of it worked wonders. “He was true to his brand,” Schweitzer said. “And that’s what made Dave, Dave, and makes him so special.”

“Don’t ya’ think that CBS eye thing… is kinda creepy?”

In 2006, he gambled, deciding to market CBS’s entire fall lineup on egg shells. Yes, real eggs. He dubbed it: “Eggvertising.”

“This was successful because, why?” asked Cowan.

And pay attention, they did. His office is a tribute to that – the breadcrumbs of a long career, one that should have been celebrated, but that was not to be.

George Schweitzer’s 47 years in his job came to an end this past April, right in the middle of the nation’s lockdown. No party, no farewell. But he’ll be back.

He’s currently working from home as a special advisor for what is now ViacomCBS.

The man with a passion for TV history can surely, after all these years, now count himself a part of it, too.

Read More: The eyes have it: Celebrating a career celebrating CBS