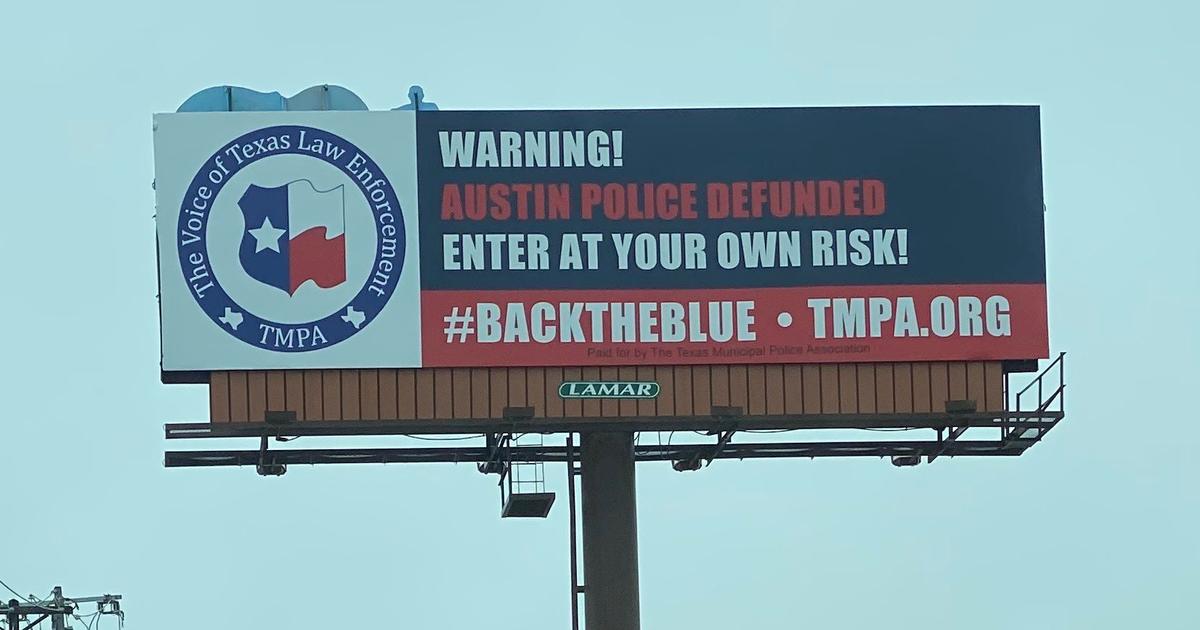 The Texas Municipal Police Association (TMPA) has put up two billboards along Interstate 35 entering Austin after the city council voted last month to cut the Austin police budget. One of them reads: “Warning! Austin defunded police. Enter at your own risk!”

The second says, “Limited support next 20 miles,” according to the association.

TMPA, the largest law enforcement association in Texas, said on Facebook it released the billboards – which include the hashtag #BacktheBlue – “to raise public awareness that Austin is a defunded city.”

Texas Lieutenant Governor Dan Patrick backed the campaign, calling them “great new billboards” in a tweet on Wednesday, while Texas Governor Greg Abbott tweeted about them with the hashtag #TexasBacksTheBlue.

Abbott has called on every Texan and candidate for public office to sign a pledge against defunding the state’s police departments and post it on social media Thursday afternoon to show support for law enforcement.

“Defunding our police departments would invite crime into our communities and put people in danger,” reads the pledge. “That is why I pledge to support any measure that discourages or stops efforts to defund police departments in Texas.”

Thank you to the Texas Municipal Police Association for these great new billboards that went up in Austin today. @austintexasgov ignored public safety and made a dangerous decision to #defundpolice #bigmistake #backtheblue #txlege pic.twitter.com/bGO8X1Hyur

“Defunding the police” has been a focal point for protesters who have taken to the streets in recent months following the death of George Floyd at the hands of police in Minneapolis. Some cities across the U.S. have acted on the calls, which come as part of a wider movement against racial injustice and police brutality.

Supporters have said “defunding” isn’t about doing away with all funding for police departments. The practice is often a reallocation of some money from law enforcement to other services that could help the community.

In Austin, the city council approved a $150 million cut in funding to the Austin Police Department last month, with the majority of money being redirected to other departments and social services, according to CBS Austin.

Austin Mayor Steve Adler and other council members argue the changes will improve public safety. He took to Twitter last month to explain the changes.

“This budget responds to concerns expressed all over the community and embodies our values as a city. New investment is focused on the underlying causes of crime,” he wrote.

Adler has pointed to Denver as a city that effectively transformed its police department, CBS Austin reports. Denver is now sending mental health professionals instead of police to respond to non-violent 911 calls. According to Adler, none of the calls in Denver have required police backup. This frees up officers for other police work.

While cities like Denver and Austin call the defunding effort “reimagining public safety,” others, including Texas Governor Abbott, see it as a threat to law and order, according to CBS Austin.

However, Adler says Austin continues to be the safest big city in Texas. “I mean you could have a 50% increase in homicides in Austin and you still wouldn’t get up to where Fort Worth is, a smaller city than we are,” the mayor said.

In a news conference on Thursday, Abbott will be joined by other state leaders who will sign the pledge against defunding police departments in the state, according to a press release. He will also announce a new legislative proposal to protect police funding in communities across Texas.