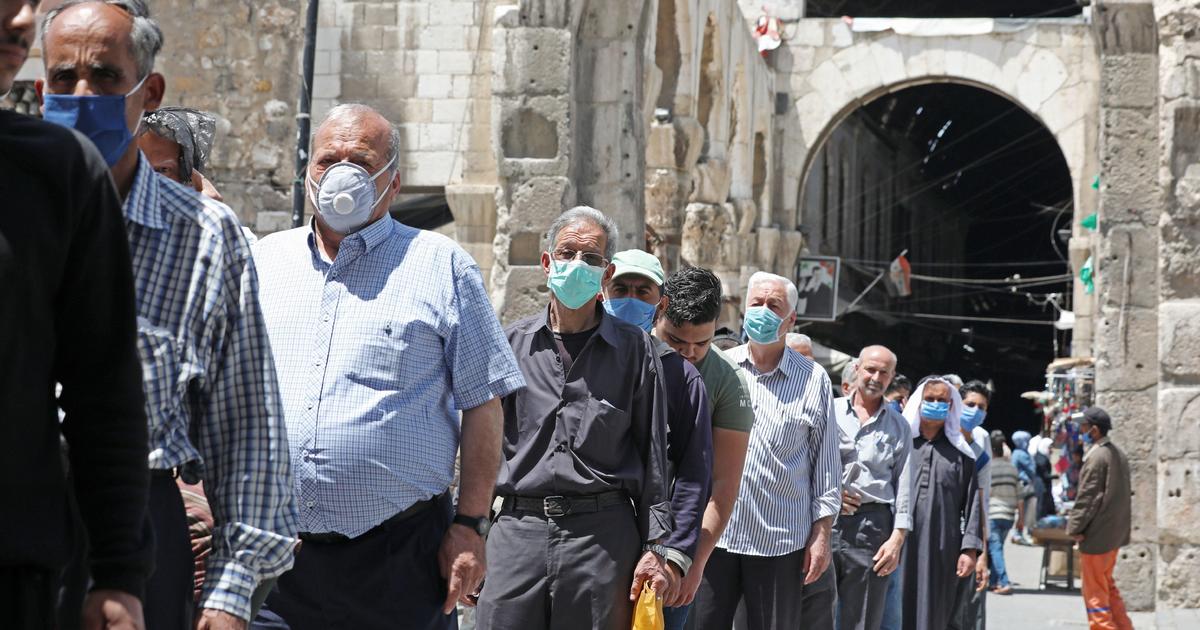 Syria may only be counting 1.25% of its actual coronavirus deaths

A staff member at Al-Assad University Hospital in the Syrian capital Damascus runs blood tests to screen for COVID-19 infections, April 15, 2020. Behind her hang portraits of President Bashar Assad (R) and his late father and former president Hafez al-Assad.

Damascus — At the end of August, Syrian President Bashar Assad reshuffled his cabinet, bringing in some new names to try to fix an economy ravaged by almost a decade of civil war and the coronavirus pandemic.

But as new research from London makes clear, getting a grip on the COVID-19 epidemic in Syria — even grasping the scale of it — will be a big challenge for the reshaped government as it tries to wind down the war that has claimed more than 500,000 lives and rebuild the economy.

Syria’s government has officially confirmed only 2,703 coronavirus cases and 109 deaths in the territory it controls since the pandemic began. There are no reliable figures for the small portion of the country held by rebel groups, or the significant swathe of northeast Syria controlled by Kurdish forces.

According to the official statistics, the country’s caseload, both in total numbers and per capita, hovers near the bottom of global rankings. But medics and residents say the real numbers are likely to be much higher.

An official at one mortuary in Damascus told CBS News that he estimated at least 100 patients were dying of COVID-19 every day in the capital alone.

In a study published on September 15, researchers from Imperial College London’s COVID-19 Response Team, the London School of Hygiene and Tropical Medicine, the Syria team at the London School of Economics, Google, the European Institute of Peace and the Middle East Institute estimated that only 1.25% of the actual coronavirus deaths in Damascus were being counted.

The Imperial College study states that “an estimated 4,380 [95% of] deaths due to COVID-19 in Damascus may have been missed as of the 2nd September 2020. Given that Damascus is likely to have the most robust surveillance in Syria, these findings suggest that other regions of the country could have experienced similar or worse mortality rates due to COVID-19.”

Even the official number of cases recorded daily tripled between the beginning of July and the end of August. The government reported 70-80 new cases every day for about a week — much higher than the single-digit increases that had been the norm since the virus was first detected in Syria in March.

A handful of high-profile cases have come to light in recent days, hinting at the true scale of the crisis.

Last week, negotiations on a new Syrian constitution aimed at ending the civil war barely got off the ground in Geneva before being abruptly halted because four of the 23 members of the official Syrian delegation tested positive for the virus after arriving.

Seven players on the national soccer team have tested positive, according to the Syrian Sports Federation, and regular Syrians have shared scores of obituaries for relatives and friends lost to the virus on social media.

A popular Facebook group for Syrian lawyers said it had lost 31 attorneys to the virus in the past month alone.

Dr. Nihad Assaf, a surgeon at the prestigious Saint Louis French hospital in Syria’s capital, told CBS News the coronavirus killed 63 physicians across the country in just one month.

It was a loss the country could ill-afford: Syria’s health infrastructure was already crippled by the civil war when the pandemic struck, with hospitals damaged by bombings, vital equipment in short supply and many doctors hurt, killed or forced to flee due to fighting.

Nabog al-Awa, the dean of the medical faculty at the University of Damascus, told CBS News that 100 coronavirus patients were arriving at the capital’s hospitals daily, but he warned there were likely many more new infections going undetected, as only the sickest people show up to hospitals.

Even those who come to emergency rooms may find little help.

“Many people are going to state-run hospitals, but unfortunately all the rooms are full,” said al-Awa. “Patients in a bad state are not admitted to the intensive care unit unless another patient dies.”

Medical workers walk in a hospital ward in the Syrian capital Damascus, with a picture of President Bashar Assad behind them, March 19, 2020, as the facility prepared to quarantine COVID-19 patients.

With that backdrop, many Syrians have gone online for medical advice. Facebook pages followed by tens of thousands of people, until recently dedicated to keeping users apprised of where shells were falling, have redirected their attention to the new, invisible threat.

With names like “Sterilize It!” and “Syrian Health Platform,” the pages publish the latest developments on the coronavirus and its spread around the world.

The government has now bolstered efforts to raise awareness about the virus and track its spread, emphasizing the importance of social distancing and wearing masks and gloves.

There are now four laboratories set up in government-held areas to process coronavirus tests, and a website has been established to monitor cases across the country.

Nizar Yaziji, until recently the Syrian Health Minister, has said Western and U.S. sanctions against the government, not the war, had thwarted the country’s response. A new wave of U.S. sanctions against Syria that came into force in June, known as the Caesar Act, have prompted fears of even deeper economic turmoil.

The Syrian government has also lost a huge amount of revenue over the last decade. Many of its lucrative gas and oil fields are now under the control of U.S.-backed fighters, along with farmland that used to produce much of the country’s domestic wheat supply. Bread prices have shot up almost 60% in recent years.

But the lack of financial resources hasn’t been the only factor. Syria also adopted anti-coronavirus measures later than most other countries in the region, and started lifting them sooner.

Syrian men line up to enter the Umayyad Mosque in Damascus to attend Friday prayers, May 15, 2020, following the authorities’ decision to allow prayers on Fridays in disinfected mosques with strict social distancing measures to limit the spread of the coronavirus.

Syrian business and industry leaders have long warned that a total economic meltdown would claim far more victims than COVID-19, and the government listened.

President Assad imposed a lockdown for just two months, until late May, banning intercity travel and ordering a nigh-time curfew. But many videos from that period showed people in crowded markets, without a mask in sight.

The quick reopening may have kept the beleaguered economy limping along, but it also may have contributed to the continuing rise in coronavirus infections — the real scale of which remains a mystery.

Read More: Syria may only be counting 1.25% of its actual coronavirus deaths