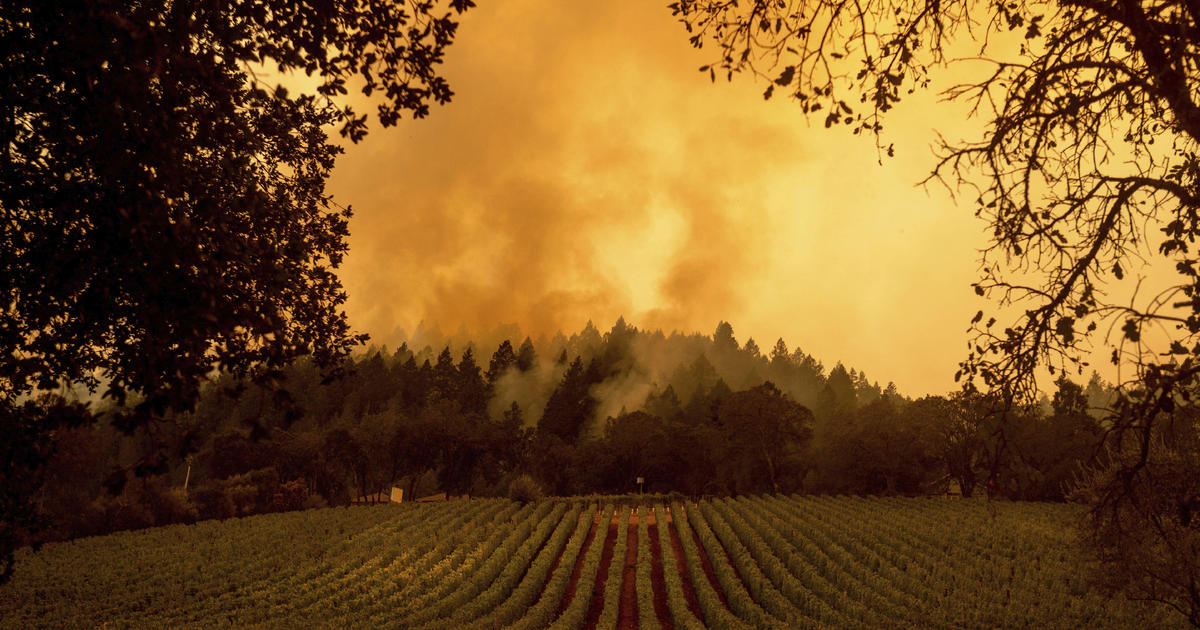 California Governor Gavin Newsom declared a state of emergency in Napa, Sonoma and Shasta counties on Monday night due to two blazes tearing through Northern California.

Three people died in the fast-moving Zogg Fire, located about 150 miles north of Sacramento. It was 0% contained as of Monday night and scorched more than 31,000 acres, according to fire officials.

The raging Glass Fire, meanwhile, has burned over 56 square miles, destroyed 113 structures and forced the evacuation of tens of thousands of people in Napa and Sonoma counties.

It consumed a decades-old winery and the Black Rock Inn, a popular bed and breakfast. It also damaged the grounds at the elite Meadowood resort, while leaving entire neighborhoods in ruins, CBS News’ Jonathan Vigliotti reported for “CBS This Morning.”

Nearly 70,000 people have been told to leave their homes, and evacuees said they had little time to outrun the flames as it grew to tens of thousands of acres.

The Glass Fire roared to life around 4 a.m. Sunday and was still completely out of control 24 hours later – despite the efforts of more than 1,000 firefighters and an intense air battle including retardant and water drops from firefighting DC-10s and a 747, CBS SF Bay Area reported.

It grew just a firefighters were finally getting the massive LNU Lightning Complex fire – which has claimed five lives, burned hundreds of homes and charred 363,220 acres in Sonoma, Napa and Solano counties – under control, with 98% containment.

Exhausted fire crews once again found themselves in the middle of another intense battle with the flames.

The weariness was also evident in the voices of the evacuees.

“You’re standing in your driveway and looking at your house and you wonder if you’re going to see it again,” said Jim Cunningham, an evacuee. “The scariest part of it is not knowing.”

Smoke rises over a vineyard as the Glass Fire burns, Monday, Sept. 28, 2020, in Calistoga, California.

Linda and Glen Shaver were worried the threat of frenzied evacuations was becoming part of the wine country lifestyle.

So far this year, California has seen more than 8,000 wildfires that have killed 29 people and burned more than 5,700 square miles. Over 7,000 buildings have been damaged or destroyed by the blazes, according to Cal Fire.

Overnight, firefighters got a break from the weather. Winds calmed down and shifted directions, bringing in higher humidity levels from the Pacific Ocean. But in the 48 hours since it erupted from a still-to-be-determined source, the blaze had altered the landscape in the picturesque region.

Early Tuesday, large pieces of ash rained down on downtown Calistoga in Napa Valley, and a bright orange glow was still very visible in the hills above the city – a reminder the threat still remained great and firefighters were still being strained and challenged.

« NYC to fine people who refuse to wear masks