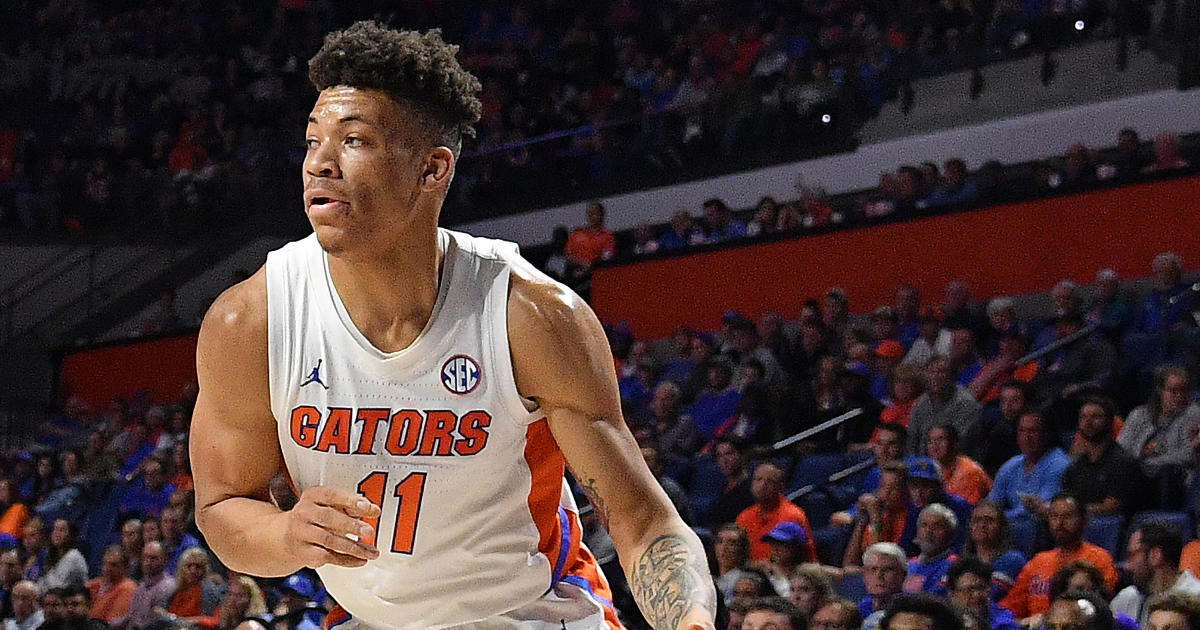 Florida forward Keyontae Johnson was “following simple commands” Monday after being transferred from Tallahassee Memorial to UF Health in Gainesville, the school said. Officials added that Johnson is undergoing further tests and remains in critical but stable condition two days after he collapsed on the court during a game at Florida State.

Johnson was moved to Gainesville via helicopter with his mother by his side. Coach Mike White and head athletic trainer Dave Werner, who stayed in Tallahassee for two nights, returned to Gainesville on the school’s jet with other family members Monday.

USA Today quoted Johnson’s grandfather, Larry DeJarnett, as saying the player had been in a medically induced coma.

Keyontae Johnson #11 of the Florida Gators in action against the LSU Tigers at Stephen C. O’Connell Center on February 26, 2020 in Gainesville, Florida.

The Southeastern Conference’s preseason player of the year crumpled to the floor coming out a timeout and received emergency medical attention. He was moved to a stretcher and carried to a waiting ambulance as teammates, coaches, staff, fans and others watched in disbelief Saturday.

ESPN declined to show any footage of the incident. According to witnesses, Johnson was standing and suddenly fell forward and landed on his face. His eyes were open and he had blood on his face and neck, according to photos obtained by The Gainesville Sun.

Florida sent a jet to Norfolk, Virginia, to get Johnson’s parents Saturday and take them to Tallahassee to be with their son.

Johnson’s teammates and coaches were visibly distraught before the game resumed. The Seminoles outscored Florida 80-60 after Johnson’s collapse and won 83-71 for their seventh straight victory in the series.

The Gators had been scheduled to host North Florida on Wednesday night, but the game was called off Monday evening. It’s unclear if it will be made up.

The school held a moment of silence for Johnson before its football game against LSU on Saturday night and again before a women’s basketball game Monday. Johnson’s girlfriend, forward Jordyn Merritt, played in that game and finished with six points and three rebounds in 17 minutes.

Johnson, a 6-foot-5 junior, averaged a team-high 14 points last season to go along with 7.1 rebounds. He also led the Gators with 38 steals.

Like many of his Florida teammates, Johnson tested positive for COVID-19 during the summer. Although the cause of Johnson’s collapse was not immediately known, the coronavirus can lead to myocarditis, a viral infection of the heart muscle. At its most severe, myocarditis can lead to sudden cardiac arrest and has been a documented cause of death for young, otherwise healthy athletes.

The Southeastern Conference mandates strict protocols, including rigorous heart testing, before players can be cleared to return to play following positive COVID-19 tests.

CBSSports.com reports players, teams and coaches from across the country all offered Johnson their support, ranging from Auburn’s Bruce Pearl and Texas Tech’s Chris Beard to UCLA’s Shareef O’Neal and Florida State’s own account.

Pfizer head of vaccine research: “I took this very personally... nothing else mattered” »