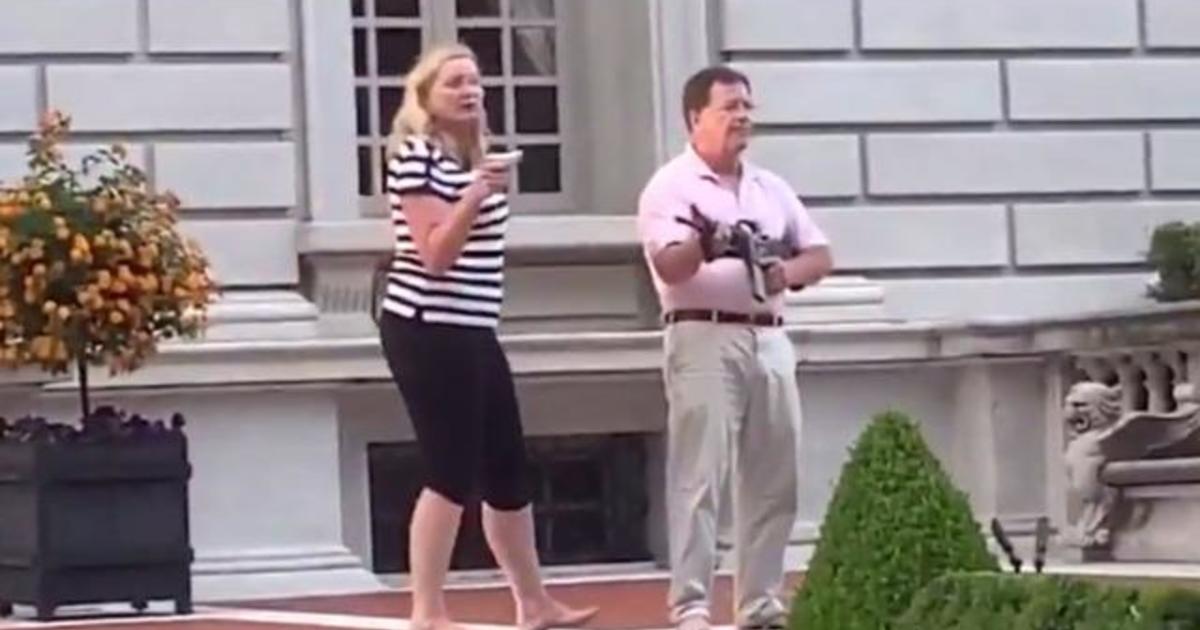 The St. Louis couple who drew national attention for brandishing guns at protesters in late June was charged on Monday, according to CBS affiliate KMOV-TV. Patricia and Mark McCloskey each face one charge of “unlawful use of a weapon — flourishing,” sources told the outlet.

“It is illegal to wave weapons in a threatening matter at those participating in nonviolent protest, and while we are fortunate this situation did not escalate into deadly force, this type of conduct is unacceptable in St. Louis,” said Circuit Attorney Kim Gardner. “We must protect the right to peacefully protest, and any attempt to chill it through intimidation will not be tolerated.”

The confrontation took place on June 28, when several hundred protesters were headed to the home of St. Louis Mayor Lyda Krewson. Photos and video show the couple with guns drawn as the protesters passed their home, which is located on a private street.

The McCloskeys outside their home on June 28.

Mark McCloskey told KMOV-TV that he and his wife were scared for their lives.

“It was like the storming of the Bastille, the gate came down and a large crowd of angry, aggressive people poured through,” he said. “I was terrified that we’d be murdered within seconds. Our house would be burned down, our pets would be killed.”

Video on social media appears to show the protesters opening and walking through the unbroken gate, KMOV reported. It’s not clear when or how the gate was damaged.

McCloskey also claimed that he and his wife received death threats from the group — although one of the protest’s leaders said the group was peaceful and no threats were made.

During a Monday appearance on “Tucker Carlson Tonight,” Mark McCloskey called it an “upside-down world.”

“The prosecutor, the circuit attorney, has decided that her job isn’t to keep us safe from criminals, but to keep the criminals safe from us,” he said.

An attorney for the couple called Monday’s charges “disheartening.”

“I, along with my clients, support the First Amendment right of every citizen to have their voice and opinion heard,” said attorney Joel Schwartz, according to KMOV-TV. “This right, however, must be balanced with the Second Amendment and Missouri law, which entitle each of us to protect our home and family from potential threats.”

The couple has received support from local politicians including Senator Josh Hawley of Missouri, who urged Attorney General William Barr to launch a federal civil rights investigation of Gardner before the charges were announced, according to KMOV-TV. He accused the attorney of making “a politically motivated attempt to punish this family for exercising their Second Amendment rights.”

After the charges were announced, Hawley urged the court to dismiss the case on Twitter. “The court should dismiss this case, which is plainly contrary to Missouri law and the US Constitution, and sanction the Circuit Attorney’s Office,” he wrote.

Missouri Governor Mike Parson said last week that he may pardon the couple. Based on what he knew about the case, “I don’t think they’re going to spend any time in jail,” he said on the Marc Cox Morning Show, according to KMOV-TV.

President Trump has also weighed in. In an interview with Townhall Media, the president said the couple “were going to be beat up badly, if they were lucky.” The couple also appeared at a virtual Trump campaign event on Friday night.