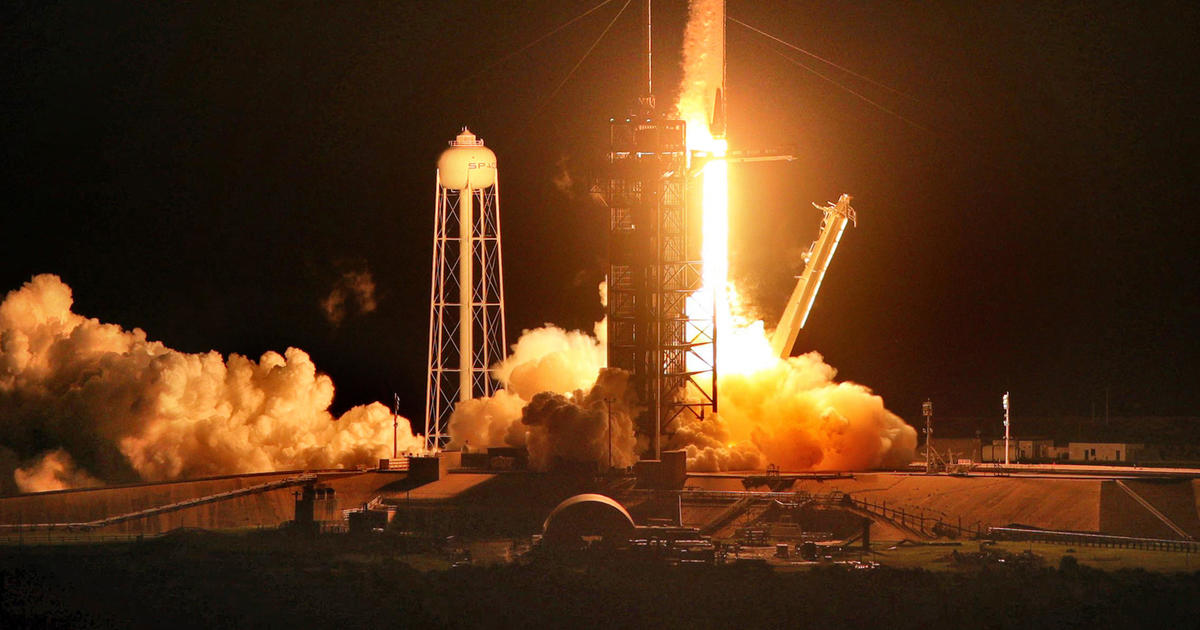 Following a sky-lighting blastoff Sunday, the SpaceX Resilience capsule and its three-man one-woman crew closed in on the International Space Station Monday, executing a series of computer-controlled rocket firings to home in for docking at the lab’s forward port.

“Go Falcon 9, Go Crew Dragon, Go Resilience!!! Big thank you to the teams at @NASA and @SpaceX for keeping us safe on the ride up. Next stop, @Space_Station,” Glover tweeted.

Go Falcon9, Go Crew Dragon, Go Resilience!!! Big thank you to the teams at @NASA and @SpaceX for keeping us safe on the ride up. Next stop, @Space_Station. pic.twitter.com/dNu1RcwLMY

As their day began, the astronauts took a moment to share video views out the Crew Dragon’s windows, prompting SpaceX mission control communicator Jay Aranha to marvel at the “amazing” view of Earth below.

“Yeah, Jay, it looks amazing from up here, too,” Hopkins said. “I tell you, I wish you guys could all be up here with us. But rest assured, you’re up here with us in spirit.”

If all goes well, the Crew Dragon capsule, named Resilience by Hopkins and his crewmates, will dock at the space station’s forward port at 11 p.m., 27-and-a-half hours after launch Sunday night from the Kennedy Space Center.

Following leak checks to verify an airtight structural seal, the crew will be welcomed aboard the station by Expedition 64 commander Sergey Ryzhikov, Sergey Kud-Sverchkov and NASA astronaut Kate Rubins, who were launched to the outpost aboard a Russian Soyuz spacecraft on October 14.

Crew-1 commander Michael Hopkins floats below the SpaceX capsule’s high-tech touchscreen displays after launch Sunday. If all goes well, Hopkins and his three crewmates will monitor an automated docking at the space station’s forward port around 11 p.m. EST Monday.

The SpaceX Crew Dragon is the first commercially developed spacecraft ever certified by NASA and the FAA to carry astronauts to and from low-Earth orbit. It is the centerpiece of a NASA drive to end the agency’s post-shuttle reliance on Russia for ferry flights to and from the space station at up to $90 million a seat.

“It’s been quite a journey for the team that’s been out here and working so hard,” Kathy Lueders, NASA chief of space operations, said after the Crew-1 launch Sunday. “I’m pretty choked up thinking about the folks that have spent years of their lives getting ready for this mission. Being able to see the crew fly was just phenomenal.

“But we’re not done yet. We need to keep going, that spacecraft’s out there with those four precious crew members on (it) and we’re going to get them safely to the International Space Station.”

After breakfast and updates from flight controllers, Hopkins and company planned to monitor the remaining rendezvous rocket firings designed to move the spacecraft into position behind and below the space station to set the stage for final approach.

In a first for a U.S. orbital spacecraft, the Crew Dragon is designed to fly itself all the way to docking with no input from the astronauts. While manual, mostly touchscreen flight controls are available if needed, no such hands-on flying was planned.

Surprisingly, perhaps, Glover, a Navy F/A-18 carrier pilot making his first space flight, said he had no problem letting the computer do the flying.

“I have no misgivings about using a flight computer, (they are) really reliable,” he told CBS News before launch. “As a stick and rudder kind of person, a pilot coming into this, I had some initial misgivings about a touchscreen display and automation, but I have really appreciated using it for this mission.”