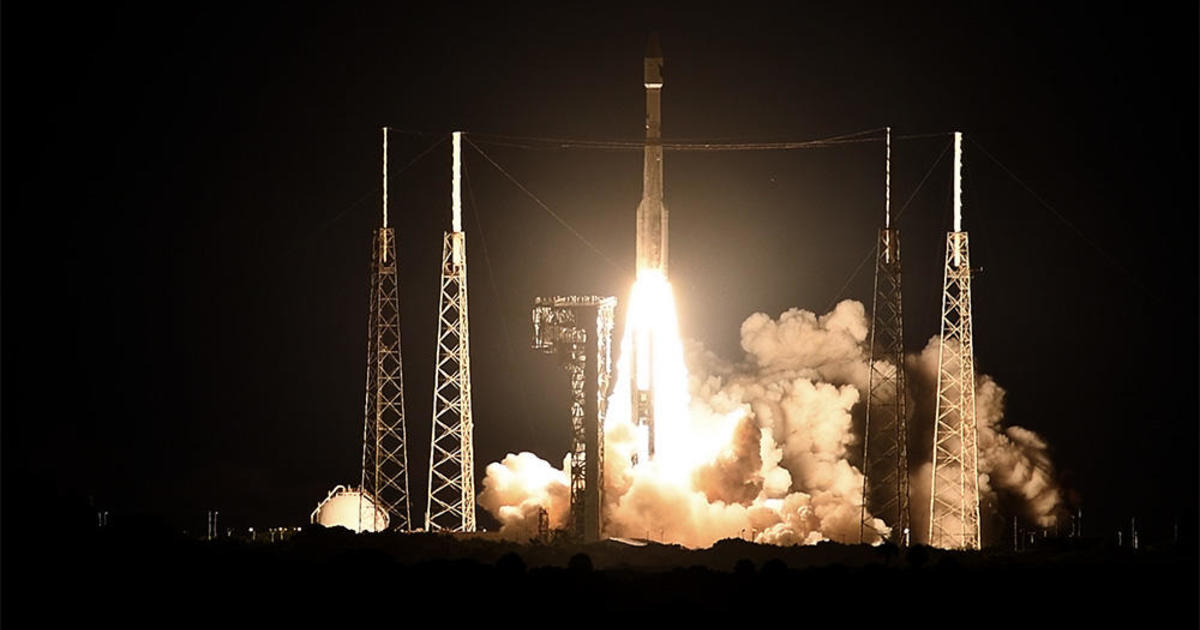 “The threats are quickly evolving and modernizing,” Col. Brian Denaro, U.S. Space Force program executive for Space Sensing, said before launch. “Part of that evolution is a range of capabilities that are not only more unpredictable, but they’re dimmer, they’re faster burning. Bottom line, they’re harder to see.

“It’s absolutely critical that our integrated family of systems that provide this overhead persistent IR (infrared) capability are not only able to detect the missiles, we’re able to track them throughout their flight and then report on those events on a timeline that’s relevant to being able to engage those targets.”

In an ironic reminder of past commercial ties, the Space Based Infrared System Geosynchronous Earth Orbit — SBIRS GEO 6 — satellite relied on the Atlas 5’s Russian-built RD-180 first stage engine to propel it out of the lower atmosphere in a dramatic early morning climb to space.

The RD-180, along with two Northrop Grumman strap-on solid-fuel boosters, ignited with a burst of fiery exhaust at 6:29 a.m. EDT, 17 minutes before sunrise, quickly pushing the 194-foot-tall rocket away from launch pad 41 at the Cape Canaveral Space Force Station.

As the rocket climbed into the light of the rising sun, the exhaust plume turned a brilliant shade of orange before narrowing to a striking white trail after the strap-on boosters fell away, a high-altitude spectacle visible for dozens of miles around.

It was the first of two planned Florida launchings just 12-and-a-half hours apart, with SpaceX preparing for an evening Falcon 9 flight from nearby pad 40 to put a South Korean science probe on a trajectory to the moon.

Spaceflight Now reported the two launchings will set new records for the most rockets to take off from Florida’s Space Coast in one year — 34 — and the shortest time between two orbital flights since 1967.

As the Atlas 5 climbed into the light of the sun, its exhaust plume turned brilliant shades of orange moments before the rocket shed its two strap-on solid-fuel boosters and continued the climb to space in a spectacle visible for miles around.

The Atlas 5 flight plan called for SBIRS GEO 6 to be released into a highly elliptical orbit after three firings of the Centaur second stage’s Aerojet Rocketdyne RL10C-1-1 engine over three hours. If all goes well, on-board thrusters will be used to put the satellite in a circular 22,300-mile-high orbit above the equator.

At that geosynchronous altitude, satellites take 24 hours to complete one orbit and thus rotate in lockstep with the planet below, providing constant hemispheric views.

Built by Lockheed Martin, the SBIRS GEO 6 satellite is equipped with sensitive “staring” and scanning sensors to monitor the planet below for the tell-tale heat signatures of rocket engines in flight.

An artist’s impression of a SBIRS satellite in orbit.

Working around the clock with other SBIRS and older Defense Support Program early warning satellites, the system provides overlapping views enabling computers to quickly detect, track and predict where incoming missiles might be headed.

“This is an integrated system of capabilities, end-to-end integrated to deliver … not just the messages and the warning, but also the ability to do something about it,” Denaro said.

“Our entire integrated team across the Department of Defense is focused on getting those messages where they need to go on the timeline that’s necessary to engage the target and respond in a timely manner.”

Bill Harwood has been covering the U.S. space program full-time since 1984, first as Cape Canaveral bureau chief for United Press International and now as a consultant for CBS News. He covered 129 space shuttle missions, every interplanetary flight since Voyager 2’s flyby of Neptune and scores of commercial and military launches. Based at the Kennedy Space Center in Florida, Harwood is a devoted amateur astronomer and co-author of “Comm Check: The Final Flight of Shuttle Columbia.”