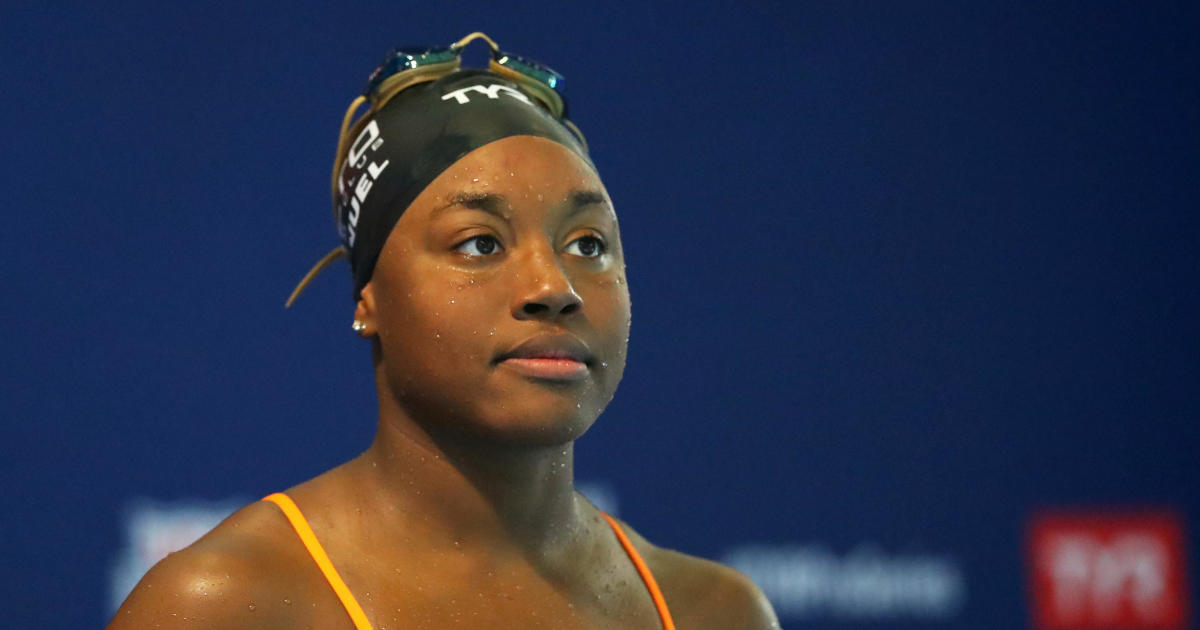 When Simone Manuel clinched a gold medal in the 100-meter freestyle at the 2016 Rio Olympics, she became the first Black woman to win an individual medal in Olympic swimming. She is also the only woman who has ever won seven medals in a single world championships, which she accomplished last year in South Korea.

Despite her historic achievements, the 23-year-old swimmer said she has felt excluded in the sport “many times” and still sometimes does because “it’s the climate of the world we live in.”

“Sadly, there still is racism that exists,” she said.

Manuel said that inclusivity is extremely important to her because, at one point, she even wanted to quit. “And to know that if I were to quit, I wouldn’t have reached the goals that I have or inspired others to dream beyond traditional assumptions of stereotypes,” she said.

Simone Manuel looks on during Day One of the TYR Pro Swim Series on March 4, 2020 at the MidAmerican Energy Aquatic Center at the Wellmark YMCA in Des Moines, Iowa.

Manuel said swimming “definitely has a long way to go when you’re talking about diversity and inclusion,” adding that only 1% of the USA Swimming membership is Black. According to USA Swimming’s 2019 demographic report, 0.8% of female athletes and 0.6% of male athletes out of its 327,337 year-round athletes are Black. The report noted that 34% of athletes did not respond to an ethnicity question on registration forms.

Manuel said in order to increase inclusivity in the sport, it is important for swimming coaches and officials to have honest conversations with athletes of color.

“I think that’s what was so wonderful about my club coach growing up when I was younger. She knew some of the adversity I was going to face in the sport of swimming because of the color of my skin and I think she sought out a mentor for me. And we had honest conversations about what I was going through,” Manuel told CBS News.

In her career, Manuel has personally pushed for inclusivity. When she signed with her first professional sponsor, swimwear brand TYR, in 2018, her contract had an inclusion rider – a first for an athlete sponsorship program, according to TYR.

With this year’s Olympics postponed due to the coronavirus pandemic, Manuel has used her platform to help feed the hungry and advocate for racial justice. She recently partnered with Hunger Not Impossible – a service that connects people who are food insecure with access to meals – to deliver meals to people in her hometown of Houston.

Manuel said she has used her platform to advocate for racial justice in the past but it has become easier as the national conversation about injustice and police brutality swelled following the death of George Floyd in May in Minneapolis.

“In the past, I’ve felt like I had to filter what I say in order to not offend people or put myself in a position where I’d possibly be targeted for what I’m saying,” Manuel said. “But now that people are listening, it’s a little bit easier for me to stand bold and firm in what I’m saying and not filter how I’m feeling about these situations, because they’re important conversations that all of us need to have.”

In June, Manuel used her Instagram to show solidarity with the Black Lives Matter movement. “Millions of protesters across the country are speaking out against anti-black racism and police violence. But we still have a lot of work to do, and we can’t let up. So keep going,” Manuel wrote, wearing a Phenomenally Black T-shirt – the proceeds of which go to Black Futures Lab.

Millions of protesters across the country are speaking out against anti-black racism and police violence. But we still have a lot of work to do, and we can't let up. So keep going. Continue fighting for our Phenomenally Black community until there's full accountability. All proceeds from this @phenomenal tee benefit @blackfutureslab, which is working to build Black political power. 🤍🖤🤍

Earlier this month, she joined other athletes in signing an open letter to NASCAR driver Bubba Wallace which vowed support for him as he stands against racism. It said, “We stand with you.”

She also used her platform to promote a message from the AfroSwimmers group, which asked USA Swimming to hire more black coaches and “approve and support the use of larger swim caps for swimmers with natural hair and locs,” among other things.

While speaking with CBS News, Manuel said she wants people to “try to dismantle stereotypes, to not feel like people have to be put in a box, because we’re all capable of doing wonderful things, but systems in place have constantly made people feel inferior or made them feel like they can’t achieve the things they can achieve.”

Manuel hopes to inspire others to follow their dreams and she said the key is to stay true to yourself.

“If you love the activity or the sport that you’re doing, then go at it 100%. Don’t let anyone stand in your way. I think that’s definitely what got me through some of the hard times I had in the sport of swimming,” Manuel said. “Even though I dealt with adversity and trials and tribulations, at the end of the day, I loved to swim, and I wasn’t going to be happy walking away from the sport because of the racism that I faced.”

The Olympian’s philanthropy and activism was recently recognized in a Procter & Gamble digital video called “The Measure of Greatness,” which shines “a light on Olympic and Paralympic athletes and hopefuls who have demonstrated what it means to inspire on and off the field of play.” Procter & Gamble is a partner of The International Olympic Committee, and through the video sought to tell the stories of athletes “who have used this moment to step up to a different stage in service to others.”

Simone Manuel cries while listening to the national anthem at the Rio 2016 Olympic Games.

Manuel said she worked hard to reach the goals she set for herself and her performance at the 2020 Olympics and called the delay of the Tokyo games due to the coronavirus pandemic “bittersweet.” She said she recognized there are “so many other things that needed the focus and attention from athletes in the world in general – and that was not sports.”

Manuel, however, is still training, and hopes to qualify for next year’s Summer Games, which are scheduled to start a year from Thursday. She said swimming won’t be over for her “any time soon.”

“Yes, athletes have lost the opportunity to compete for our country this year, but hopefully that comes in 2021. But what can we do now to make the world a better place and give back to our communities?” she said. “I think that sometimes you really have to put yourself on the back burner and really put others ahead of you, because what is the world without love? What is the world without holding someone’s hand and helping them get through difficult times.”