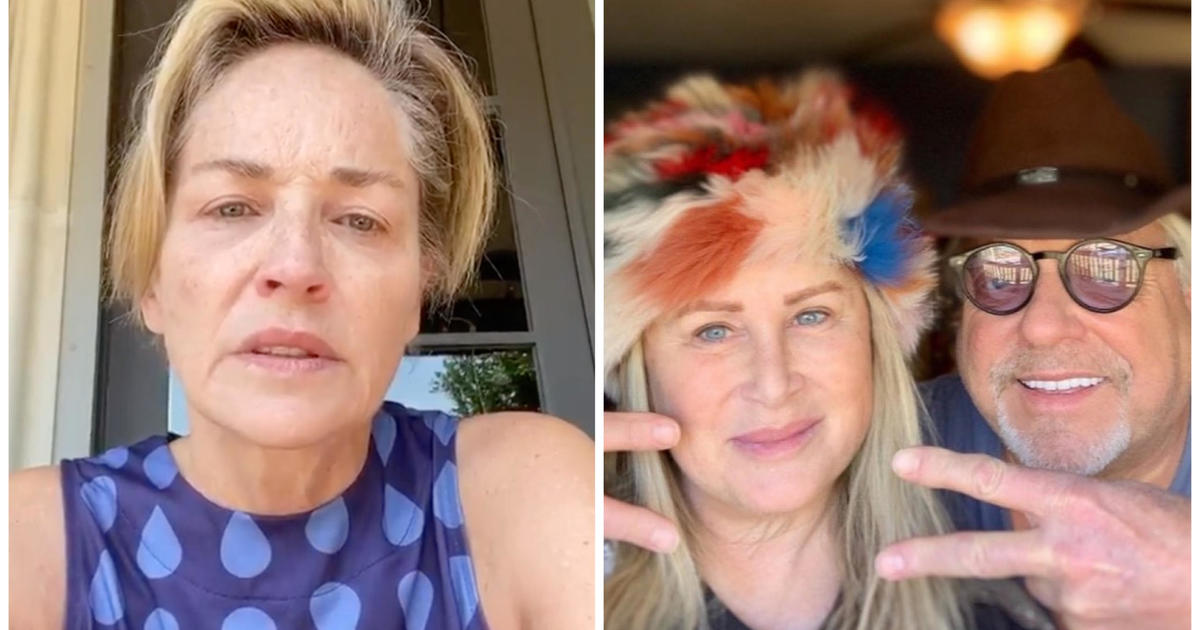 Sharon Stone is opening up abut her sister’s battle with the coronavirus, and she is blaming “non-mask wearers” for her sister’s health crisis. Over the weekend, the actress shared photos of her sister, Kelly Stone, and the hospital room in Montana where she is getting treated for COVID-19.

“My sister Kelly, who already has lupus, now has COVID-19. This is her hospital room. One of you Non-Mask wearers did this,” Stone wrote in the caption. “She does not have an immune system. The only place she went was the pharmacy. There is no testing in her county unless you are symptomatic, & then it’s 5 day wait for results. Can YOU FACE THIS ROOM ALONE?”

She then urged everyone, “Wear a mask! For yourself and others.”

She also reposted a photo of Kelly and her husband, and re-shared what her sister wrote: “This is us. March 13. Drove to our paradise in Montana,” Kelly wrote. “We thought covid wouldn’t and couldn’t find us. No shopping, no parties, barely saw a human. Now fighting for a breath.you don’t want covid.”

In an IGTV video on Sunday, Stone continued to stress her message about the risks of COVID-19 and the shortcomings of the U.S. response, captioning the video: “VOTE TO LIVE.”

In the video, the actress explained that her sister and her husband, Bruce, stayed at home as long as they could. Now they are in separate hospital rooms.

“In Montana where they live, you can’t get tested unless you’re symptomatic and then you don’t get your test results for five days,” Stone said.

“Also, the people that they came in contact with, like my mother, who’s had two heart attacks, five stents, and a pacemaker in the last five months, couldn’t get a test because she wasn’t symptomatic even though she could have been their asymptomatic contact that gave them COVID,” she continued. “The nurses in the hospital that are taking care of them can’t get tested because they don’t have tests to test them with.”

“Those nurses are risking their lives and cannot get tested,” Stone said.

Stone also revealed that both her grandmother and godmother died of COVID-19. She did not say where they lived.

“My sister and her husband are fighting for their lives and my sister is not doing well,” she said in the video.

On Instagram, Stone said she had been calling Montana Governor Steve Bullock but he was not returning her calls. She also said the local health department is “hanging up on me.”

That echoes the warning of Dr. Deborah Birx, a leader of the White House coronavirus task force, who said earlier this month that the pandemic has entered “a new phase” in the U.S., with the virus “extraordinarily widespread” in rural areas.

“What we are seeing today is different from March and April,” Birx said in an interview with CNN. “To everybody who lives in a rural area, you are not immune or protected from this virus.”

There have been at least 5,792 confirmed coronavirus cases and 82 deaths in Montana, the state health department reports. Nationwide, more than 5.4 million people have been infected and over 170,000 have died, according to Johns Hopkins University .

A number of reports have pointed out that countries with female leaders — like Prime Minister Jacinda Ardern in New Zealand, President Tsai Ing-wen of Taiwan and Chancellor Angela Merkel in Germany — have done better at controlling the pandemic than other nations.

« TheRealAlphaHydra Is Recreating Destiny 2 In Minecraft: Four Locations, 30+ Exotic Weapons And Even More!