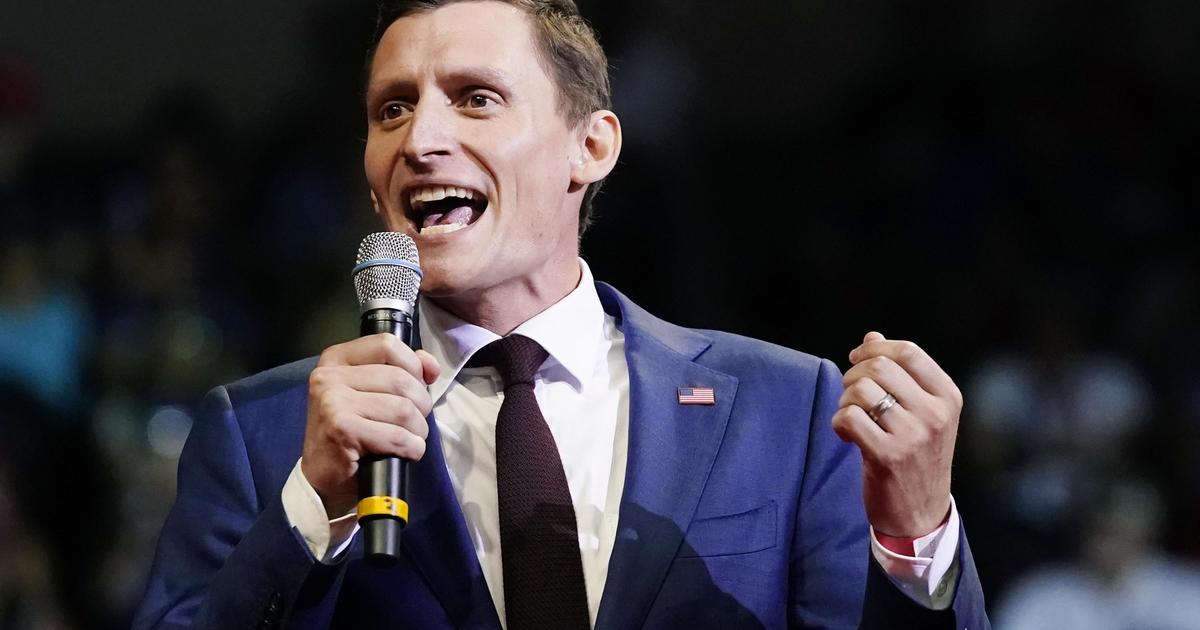 At least five Republican primary winners in battleground states won by Joe Biden embraced Donald Trump’s baseless claim that the 2020 election was stolen. Several took action to try to overturn the 2020 election results when Trump lost their states, and if elected in November, they could have the power to block or delay the certification of election results in their states in the 2024 presidential election.

Here are some candidates to watch:

Trump-backed former TV news anchor Kari Lake won a tight race over opponent Karrin Taylor Robson, the lawyer endorsed by former Vice President Mike Pence and the state’s sitting governor, Doug Ducey. It was one of at least three primary showdowns so far this year between the former president’s preferred candidates and those of his vice president.

In a June debate, Lake called the 2020 election “more than unfair” and reiterated the false claim that President Joe Biden “lost the election and shouldn’t be in the White House.” In that same debate, Lake asked her opponents to raise their hand if they thought the election was “stolen.” Robson responded, “I’m not going to play your — your stunt.”

Last year, Lake said if she were Arizona’s governor in 2020, she would not have certified Mr. Biden’s win in state. Biden won Arizona by 10,457 votes, and a controversial audit and hand recount of the ballots in the state’s most populous county actually found Mr. Biden’s lead increased by a couple hundred votes.

Leading up to Tuesday’s primaries, Lake continued to cast doubt on the election process. “We’re already detecting some stealing going on, but you guys know I’m a fighter, right?” she told a conservative group in late July. After her election night remarks late Tuesday night, when ballots were still being counted, Lake repeatedly predicted she’d win as long as “all the legal” ballots were counted.

Mark Finchem, a Republican candidate for Arizona secretary of state, waves to the crowd as he arrives to speak at a Save America rally on Friday, July 22, 2022, in Prescott, Ariz.

Arizona state House Rep. Mark Finchem won the GOP primary for Arizona secretary of state, the top election official in the state. The position was left open by Democrat Katie Hobbs who is running for governor. Over a year after Mr. Biden took office, Finchem was still trying to overturn the results.

In February, he introduced a resolution to decertify the 2020 election results in Maricopa, Pima and Yuma counties. Mr. Biden won the state’s most populous county, Maricopa, and Pima County by more than 142,000 votes, while Trump won Yuma by over 4,000 votes.

“That there is no process under current law for the Arizona Legislature to ‘decertify’ an election, does not mean that the Legislature cannot provide a remedy for outcome-determinative fraud and illegality in the conduct of the election,” Finchem wrote in the resolution. “The 2020 General Election is irredeemably compromised, and it is impossible to name a clear winner of the contest.”

Finchem attended Trump’s “Stop the Steal” rally on Jan. 6 and was near the Capitol as rioters stormed the building, according to the Arizona Mirror.

Last October, Finchem called for the decertification of Mr. Biden’s victory during an appearance at a Trump rally in Iowa. He also supported the Maricopa County audit, a lengthy hand recount of ballots by private contractors who ultimately found Mr. Biden had won the county by about 45,000 votes.

Finchem is also a member of the far right Oath Keepers who helped organize the “#StopTheSteal” movement in Arizona. He was endorsed by Trump in Sept. 2021.

Blake Masters, a Republican candidate running for U.S. Senate in Arizona, speaks at a Save America rally on Friday, July 22, 2022, in Prescott, Ariz.

In a campaign ad released in November, Masters said, “I think Trump won in 2020,” adding that the “election was really messed up.” It’s a sentiment that’s echoed on Masters’ website. There he wrote that the 2020 election “was a rotten mess” and added “if we had had a free and fair election, President Trump would be sitting in the Oval Office today.”

Like other Republicans who have spread Trump’s claim of a stolen election, Masters has expressed suspicion of the $400 million grant by Facebook founder Mark Zuckerberg to state and local election officials. He also calls for a photo ID requirement, the elimination of drop boxes and “ending indiscriminate mass mailing of ballots.”

In 1991, Arizona passed a law for no-excuse mail ballots. The state allowed for voters to remain on a list to get a mail ballot for every election, and according to Politifact, three of every four Arizona voters were on that permanent list.

Dixon, a conservative radio host and activist, will be the Republican nominee facing Democratic Gov. Gretchen Whitmer, who led the state during the 2020 presidential election. Mr. Biden beat Trump in the Midwestern state by 154,188 votes, just under 3 points.

In one primary debate, Dixon had raised her hand along with the rest of the Republican gubernatorial field when asked if there was enough fraud to impact the 2020 election results. In another debate she asked if she believed Trump had legitimately won the state. She replied, “Yes.”

Days after the November election in 2020, Dixon tweeted the election had been stolen and said Democrats committed “sloppy and obvious” voter fraud, according to Bridge Michigan, but offered no evidence to support her claim.

However, in an interview last week with “Fox News Sunday,” Dixon did not explicitly say she thought the 2020 election was stolen. Instead, she directed her criticism at Democratic Secretary of State Jocelyn Benson.

“We have to make sure our elections are secure and what happened in 2020 doesn’t happen again,” she told Fox News. “We are calling for common-sense election law.”

Kristina Karamo, the likely GOP nominee, was a poll watcher in 2020 who signed an affidavit claiming she had witnessed voter fraud during the ballot counting in Detroit. Her claim has been debunked. She signed onto a lawsuit to overturn Biden’s 154,188 vote win in 2020 and called for a “forensic audit” of the election.

In Michigan, there is no primary to choose a nominee for secretary of state; instead the state’s respective parties vote for their preferred candidate. Karamo won the majority of the vote at a Michigan GOP party convention in April.

In December, Karamo tweeted that “corrupt politicians with the help of the lying media were trying to steal the election, ain’t going to happen.” Karamo gained a following after the 2020 election, when she claimed to have witnessed fraudulent activity where Detroit was counting absentee ballots and later testified in front of a state Senate committee. She made several cable news appearances to spread unfounded claims of widespread fraud and filed to intervene in Texas’ case at The Supreme Court that sought to overturn the 2020 election.

One of Karamo’s central fraud claims was about a ballot that had straight-ticket voting bubbles filled out for Democrats and Republicans. She claimed a worker wanted to count the ballot for Democrats and a supervisor told the worker to “push it through.” Chris Thomas, the longtime elections director in Michigan who was at the absentee counting facility in Detroit, told CBS News that “push it through” meant that the ballot would be registered as an overvote and would not count for either party.

During New Jersey’s gubernatorial election in Nov. 2021, Karamo baselessly claimed that ballots for Democrat incumbent Governor Phil Murphy were “magically” appearing. “Can’t make this stuff up, but again you’re “insurrectionist” and a “big lie proponent” for pointing out the obvious,” she tweeted. Like DePerno, Karamo was endorsed by Michigan Republicans in April and is expected to become the formal nominee in August.

In this Sept. 9, 2019, file photo, Missouri Attorney General Eric Schmitt speaks in front of the U.S. Supreme Court in Washington.

Coming into primary day, Missouri Republican Eric Schmitt had received national attention as an “ERIC” in the race. Former President Trump had endorsed “ERIC” for the Missouri U.S. Senate seat, and Eric Schmitt, one of three “Eric’s” on the campaign trail, embraced Trump’s endorsement and said he was “grateful” for it.

Schmitt has also embraced Trump’s assertion that the 2020 election was stolen, leading a lawsuit with 17 other attorneys general in 2020.

On July 5, Schmitt released a campaign ad on Twitter in which he said that when he was Missouri’s 43rd attorney general, he “stood with President Trump to stop election fraud.”

Sarah Rice for The Washington Post via Getty Images

Gibbs is a former Trump-era Housing and Urban Development official who won his primary challenge against Republican Rep. Peter Meijer, a moderate freshman Congressman who voted to impeach Trump after the Jan. 6 attacks.

During a debate with Meijer in late June, Gibbs claimed there were “anomalies” with the 2020 election results “that are simply mathematically impossible.” On his campaign website, Gibbs calls for a “full forensic audit” of the 2020 election and wrote that there should be an ID required to vote, an elimination of the early voting period and says the “mass mailing of ballots to every voter… would be considered corrupt if used in any developing country.”

In 2020, Democratic Secretary of State Jocelyn Benson, mailed ballot applications — not ballots —to every registered voter because of the pandemic. This year, Michigan voters applied to receive absentee ballots, and state election officials said that just over half the votes in the primary were absentee ballots.