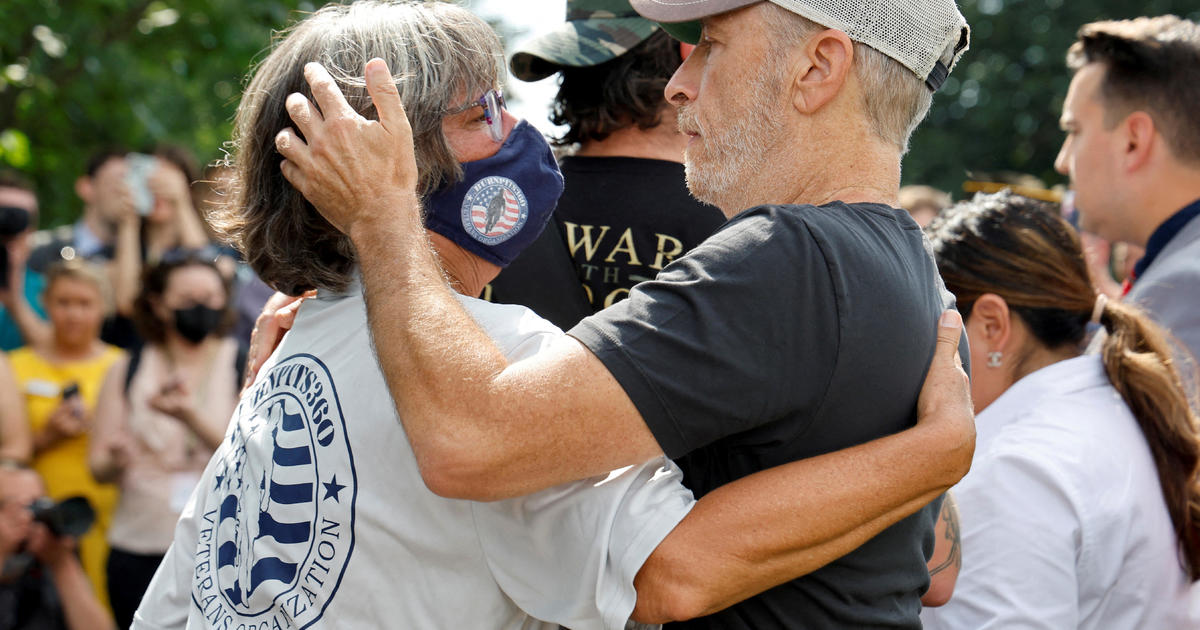 The Senate on Tuesday night overwhelmingly approved the PACT Act, a bill to expand health care benefits for veterans who developed illnesses due to their exposure to burn pits during military service. The 86-to-11 vote was received with cheers from the Senate gallery.

The bill now heads to President Biden’s desk, and the White House says he looks forward to signing it. The vote came after Senate Majority Leader Chuck Schumer announced Tuesday afternoon that he and Minority Leader Mitch McConnell had come to an agreement.

Watching the final vote from the Senate gallery Tuesday night, comedian Jon Stewart, a vocal advocate for the bill and veterans, could be seen with tears in his eyes. Stewart has been on Capitol Hill rallying support for the bill and pressuring senators to pass it.

“I’m not sure I’ve ever seen a situation where people who have already given so much had to fight so hard to get so little,” he said after the vote. “I hope we learn a lesson.”

Democratic Sen. Richard Blumenthal had a message for the Department of Veterans Affairs Tuesday night: “I have a message to the VA: You better get it right. You better deliver. These veterans have waited already too long.”

Mr. Biden said after the vote that he looks forward to signing the bill “so that veterans and their families and caregivers impacted by toxic exposures finally get the benefits and comprehensive health care they earned and deserve.”

We'll never be able to repay the debt we owe to those who have worn the uniform, but today, Congress delivered on a promise to our veterans and their families.

The PACT Act will be the biggest expansion of VA health care in decades. We should all take pride in this moment. pic.twitter.com/l72HcsNJLw

The legislation will expand benefits for an estimated 3.5 million veterans exposed to toxic burn pits during the U.S. wars in Afghanistan and Iraq. The bill will remove the burden of proof from veterans seeking care for conditions related to exposure from burn pits by presuming a number of conditions, including several cancers, are related to the exposure.

Burn pits are holes in the ground the U.S. military dug near bases in countries that had limited infrastructure where troops would dump trash and burn it to dispose of it.

Veterans, military family members and advocates rally outside the Capitol in Washington, Tuesday, Aug. 2, 2022, in support of a bill that enhances health care and disability benefits for millions of veterans exposed to the toxic burn pits.

The bill initially passed the House and Senate in June, but due to a snag in the language, it had to go back to the House and Senate before it could be sent to President Biden’s desk. The legislation again passed the House but failed to advance beyond a procedural vote in the Senate last week. Twenty-five Republican senators who had voted for the bill in June voted against advancing the bill last week, citing an objection to how the legislation is paid for.

Republican Sen. Pat Toomey of Pennsylvania has objected since June to a provision in the legislation language that would move $400 billion in preexisting discretionary veterans spending to make it mandatory spending. A measure that is paid for with mandatory spending generally does not have to be approved each year, as discretionary spending does. Toomey argues that this changed designation frees up funds that could be used on items unrelated to veterans.

Mr. Biden has blamed burn pits for the health problems of his late son, Beau Biden, who died of a brain tumor in 2015. In a 2019 speech to the Service Employees International Union, then-candidate Biden said because of his son’s “exposure to burn pits, in my view, I can’t prove it yet, he came back with stage four glioblastoma.”

— Melissa Quinn contributed to this report.