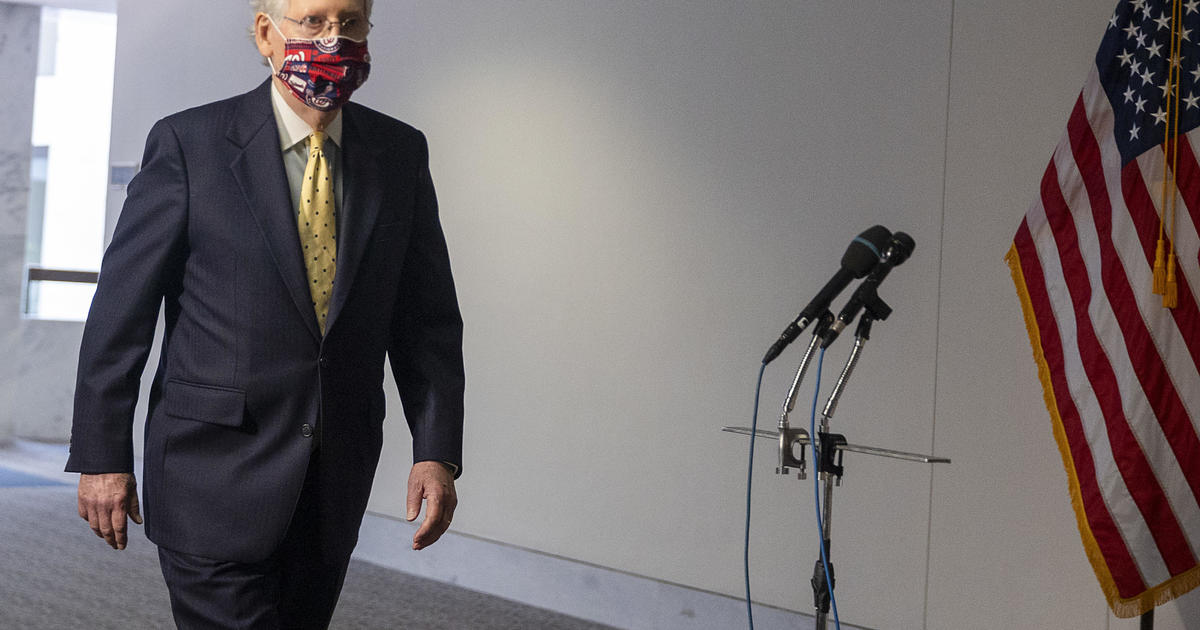 Washington — Senate Republicans are set to unveil their fourth phase of federal coronavirus response efforts Monday, rolling out their legislative package as enhanced unemployment benefits are beginning to expire for millions of Americans who are out of work due to the coronavirus pandemic.

The legislation is the culmination of talks between the White House and Senate Republicans and is expected to be made public by Senate Majority Leader Mitch McConnell on Monday afternoon. The proposal represents the opening bid from Republicans in negotiations with congressional Democrats, who are urging the GOP to use a $3 trillion measure approved by the Democrat-led House in May as a guide for the “phase four” coronavirus relief bill.

The proposal from Senate Republicans, estimated to cost around $1 trillion, is expected to include another round of $1,200 direct payments to Americans, billions of dollars for education as schools weigh how best to approach the upcoming academic year, and assistance to jobless Americans, though Republicans have rejected extending the $600 enhanced unemployment benefits that was included in a relief bill passed in March and began expiring for roughly 30 million Americans this weekend.

“The original unemployment benefits actually paid people to stay home and actually a lot of people got more money staying at home than they would going back to work,” he said. “So the president has been very clear, our Republican senators have been very clear, we’re not going to extend that provision.”

Larry Kudlow, President Trump’s top economic adviser, said Sunday that the measure will also include tax credits for small business and restaurants. It is expected to offer liability protections for businesses and other institutions, a top priority for McConnell.

Mr. Trump met with Republican congressional leaders at the White House last week to lay out the broad contours of the next coronavirus relief package. The early details of the measure were presented to the full GOP Senate conference Tuesday, but Senate Republicans are fractured over the proposal, with some of the body’s more conservative members taking issue with its $1 trillion price tag.

On “Face the Nation” on Sunday, Republican Senator Ted Cruz of Texas said he is not on board with the next legislative package and believes the focus should be on an economic recovery plan that offers a payroll tax cut and eases taxes and regulations on small businesses.

“A recovery bill would suspend the payroll tax, which would give it a pay raise to everyone in America who’s working. That actually gets people back to work,” he said.

While Mr. Trump championed including a payroll tax cut in the next bill, Mnuchin said last week it will not be among the provisions in the upcoming package. In backing down from his demand for the payroll tax cut, the president sought to blame its exclusion on congressional Democrats, tweeting last week that the relief package could not pass with it. Republicans, however, opposed including it in the bill.

Negotiations between Senate Republicans and the White House continued over the weekend after plans to unveil the measure late last week were scrapped, and Meadows and Mnuchin met with Senate aides at the Capitol to continue hashing out the details of the relief package.

Both Meadows and Mnuchin suggested during separate interviews Sunday that Congress may have to pass a narrow, more targeted bill aimed at providing protections for unemployed Americans first and negotiate a more comprehensive measure in the coming weeks.

“Within the $1 trillion package, there are certain things that have time frames that are a bigger priority. So we could look at doing an entire deal, we could also look at doing parts,” Mnuchin told Fox News.

But House Speaker Nancy Pelosi has rejected taking a piecemeal approach, since the House passed its $3 trillion coronavirus relief bill back in May while the Senate hit pause on further action. The extension of enhanced unemployment benefits is likely to be a sticking point in negotiations between Republicans and Democrats, as well as federal aid to local and state governments facing a cash crunch because of the coronavirus crisis. Democrats included billions in assistance to state and local governments in their massive aid bill passed months ago.

On Monday, Pelosi called on GOP congressional leaders and top White House officials to meet with her and Senate Minority Leader Chuck Schumer before releasing their proposal to begin negotiating and “get the job done.”

“We have stood ready to negotiate for more than two months. Unfortunately, it still remains unclear if Republicans will produce a proposal today,” Pelosi said in a statement, adding that “if Republicans care about working families, this won’t take long.”

“Time is running out,” she continued. “Congress cannot go home without an agreement.”

Google employees will work from home until summer 2021 »