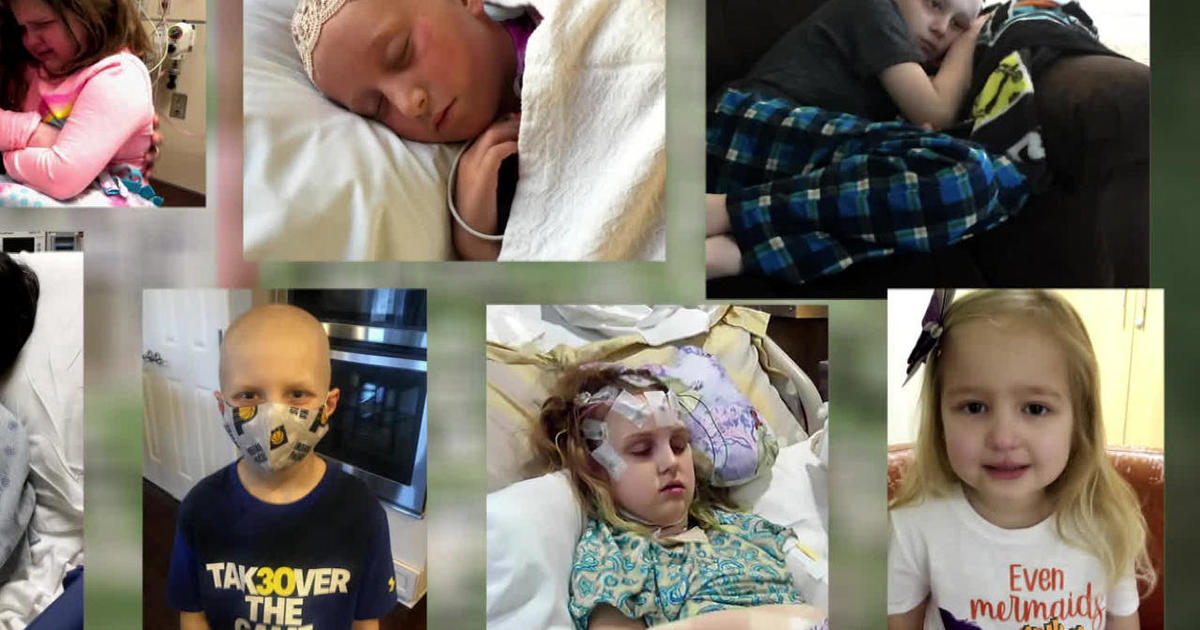 Something very strange seems to be happening in Johnson County, Indiana.

“It’s been hard on all of us,” said Zane. “It’s changed us for a lotta ways. I don’t even know how to describe them. It’s just one thing after another. Every year, or month, there’s another kid.” Zane was diagnosed with acute lymphastic leukemia when he was ten.

“I was ten when I was diagnosed,” said Lana, who has thyroid cancer.

“Cutaneous T-cell lymphoma when I was eight,” said Karley.

A lot of children are getting sick, and it started long before the pandemic.

“Any of you been to funerals?” asked “48 Hours” correspondent Erin Moriarty.

Kari Rhinehart and Stacie Davidson started tracking the cases in 2015. So far, they have found more than 70 cases in Johnson County alone (which is above the national average).

Parents in Johnson County, Indiana, began searching for answers when a lot of children started getting sick with pediatric cancers.

More striking, many of the children with cancer seemed to live in or near the county seat, in the town of Franklin, which looks much as it did in 1940 when Life magazine put it on the map with a pictorial ode to small-town life.

“This charming cute, turn-of-the-century town, and it’s very cozy and feels homey right off the bat,” said Rhinehart, who came here in 1995 for college and never left. It was the perfect place to raise her three children: Emma, Sam and Sophie.

“Emma was an eighth-grader at Franklin middle school,” said Rhinehart. “She was a swimmer. She was an avid movie fan, a reader.”

But in late 2014, Emma began having headaches and nausea. An eye exam revealed swelling in an optic nerve. Emma had a brain tumor, a glioblastoma multiforme.

Stacie Davidson didn’t live in Franklin, but her ten-year-old stepson Zane did. The same year Emma got sick, Zane complained of leg pain and went in for blood tests. Zane was diagnosed with leukemia.

“When the doctor came in, Zane’s question was, ‘Why did I get this? Why me?'” recalled Davidson. “And the doctor said, ‘Just bad luck.'”

But Davidson and Rhinehart began to wonder, what are the odds of so much bad luck?

When parents went in search for a cause, a 15-acre commercial site on the north side of town became an obvious suspect. More than 30 years ago, after chemicals were dumped and leaked here, the Environmental Protection Agency did order a clean-up. But something along the way went wrong … terribly wrong.

More than 35 years ago, Mundell was part of an independent team that discovered contamination in the soil and the groundwater on this property with a long history of manufacturing, first by Bendix, then by Amphenol.

Most alarming: the presence of two chemicals: Trichloroethylene (or TCE) and tetrachloroethylene (PCE), both used as degreasers in electronics manufacturing and by dry-cleaners – and both known carcinogens.

Moriarty asked, “How bad was the contamination back in 1984?”

Mundell said, “Very significant levels in the groundwater, enough that we knew from there that some kind of active remediation would be necessary to bring the site back to usable condition.”

Even after the EPA required a cleanup, it took more than ten years for a system called a “pump and treat,” which cleans contaminated groundwater of toxins, to be installed, in 1995.

The EPA declined an on-camera interview with “Sunday Morning,” but in an email stated it took no further action because based on agency standards at the time “contamination levels in groundwater did not present an unacceptable risk…”

But that decision, said Mundell, allowed dangerous volatile chemicals to move off-site, along the sewer lines and into the neighborhood.

“What makes this all so insidious is the fact that when this water containing the chemicals comes down here, how it gets into the home is through vapor; it’s not really the water,” Moriarty said.

“That’s correct,” Mundell said. “It goes unnoticed. And so., that can happen, and it has happened over decades.”

Many of the sick children, said Kari Rhinehart, live within a half-mile of the former Amphenol site: “I drove by that pump and treat probably a million times in the 20 years I lived in Franklin. No clue what it was. It looks like a little shed. I mean, there’s nothing that makes you think, ‘Oh, this is a contaminated site, be careful.'”

In the 1980s the EPA required a cleanup at a commercial site on the north side of Franklin, Ind. But something went wrong.

With the numbers of sick children seemingly on the rise, Rhinehart and Davidson became alarmed by a paper trail of documents showing ongoing problems with the cleanup.

Early on, they asked for help from Franklin’s mayor, the state’s environmental agency, and the federal EPA.

“We were hopeful that the agencies would take heed and take notice and say, ‘OK, we’ll take it from here. OK, we’ve got this. We’re gonna move fast. We’re gonna figure it out,'” Davidson said. “And that definitely wasn’t the case.”

In 2018 Bruno Pigott, commissioner of the Indiana Department of Environmental Management, said, “The data that we’ve collected in all of these different situations demonstrates no specific environmental concern that is widespread over the city of Franklin.”

And health officials told the mothers that with so many different types of cancer and no direct link between the contamination and the children’s illnesses, Franklin didn’t qualify – under federal guidelines – as an official “cancer cluster.” That meant no investigation into what was making the kids sick.

So, the mothers founded a non-profit advocacy group, If It Was Your Child, and kept pushing for action. But the town was divided. Some privately feared that talk of contamination might damage the city’s image – and its property values.

Rhinehart said, “My own children were told, ‘This is something your mom does to get attention.'”

Davidson said,. “My husband received a phone call early on, they said, ‘Do you know what your wife is doing?'”

Rhinehart recalled, “There was a local health official who looked us straight in the eye, at an official meeting, as we sat there with a hydrogeologist and two cancer cluster specialists, and said, “Did you girls go all Erin Brockovitch out there?'”

But their efforts did get the attention of environmental activists, and in 2018, the New Jersey non-profit Edison Wetlands Association hired John Mundell to return to Franklin to test homes adjacent to the former Amphenol site, the very site he thought had been cleaned up some 30 years ago.

The results of the tests Mundell conducted in the summer of 2018, and again in February of 2019, are worrisome.

Moriarty asked, “Do you think there’s a reason to be concerned, even if there is no direct scientific link?”

“Absolutely,” Mundell said. “Because the levels that we are looking at are compared to a level that the EPA says can cause a concern. You would not want people to be exposed for long periods of time to the things that we found.”

The EPA has finally orchestrated a new cleanup in Franklin, starting with the sewer system leading away from the contaminated site.

In the email to CBS News, officials admit that “the off-site levels … exceed the current vapor intrusion protective standards…” Amphenol has agreed to investigate and pay for any further cleanup.

But as for Kari Rhinehart’s daughter, Emma, the tumor in her brain couldn’t be treated.

Moriarty asked, “What was the prognosis? What did they tell you?”

“I never asked,” Rhinehart replied. “I didn’t have to. Glios are relentless.”

In December 2014, Indiana’s Make-a-Wish Foundation granted Emma’s lifelong wish to visit Paris. “There’s this great picture of Emma sitting there eating these crepes, high as a kite on her painkillers probably, and just so happy, was so happy,” Rhinehart said.

“It was by far the most spectacular way you could, like … you couldn’t dream up a better way to spend the last few days of your kid’s life. Because it was everything she wanted and more.”

Three days after they got home, Emma died.

Other Franklin kids were more fortunate.

“We have talked about it before and, like, we just understand, like, what each other’s went through,” Karley said.

Stacie Davidson’s stepson, Zane, has been cancer-free since 2017. “Feel great for now,” he said.

Moriarty asked, “When you say that, so, you feel like it’s always hanging over your head?”

Athena, for two-and-a-half years, and Karley for almost nine years. Lana is working towards remission.

Kari Rhinehart and other mothers are now suing Amphenol for dumping dangerous chemicals and failing to warn residents of the danger. The company denies responsibility for causing the children’s illnesses.

They are a small band of determined parents, said Stacie Davidson, who may be changing the lives of children beyond the borders of Franklin, Indiana.

“You have all these small pockets of cities and counties that are starting to have increase in cancers and increase in other things and pediatric cancer,” she said. “That’s what’s so frustrating, is that Franklin’s not rare.”

« Battle royale over "The Crown"

Battle royale over "The Crown" »