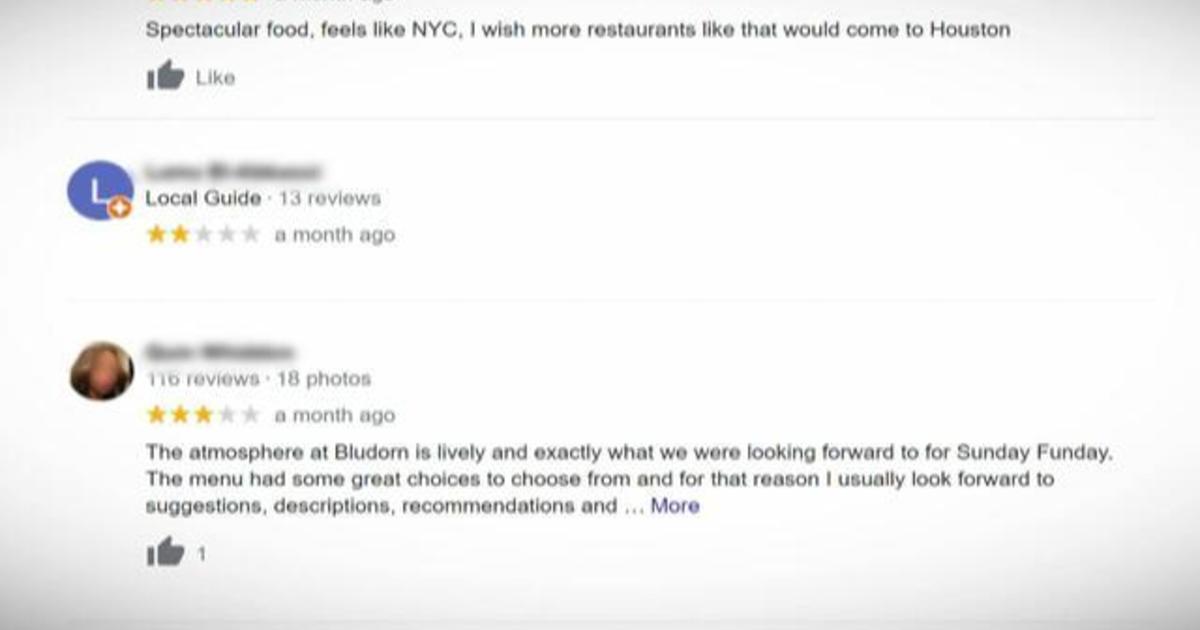 Houston restaurant Bludorn is often mentioned as one of the city’s best, serving French-inspired cuisine — but you wouldn’t know it by some of the one-star reviews posted recently on Google. According to co-owner and Chef Aaron Bludorn, all the bad reviews appeared at the same time.

“Someone was, you know, taking something that we worked so hard for — which were plenty of four-star, five-star reviews and a good rating on Google — and they knocked us down,” Bludorn told CBS News’ Janet Shamlian.

Bludorn and co-owner Cherif Mbodji said before this, they rarely received negative feedback. Both Mbodji and Bludorn were concerned about the damage the bad reviews could bring.

“A reputation for a restaurant is everything,” Mbodji said.

It wasn’t long before they learned the reviews were part of a scam after the restaurant received an untraceable email asking for a $75 Google Play gift card to have them taken down.

Bludorn said paying the $75 was never an option.

“I didn’t consider ever paying that ransom because to me that meant they would have, you know, won — and been able to. I also didn’t know where it would end,” said Bludorn.

The note said that bad reviews will continue to be left unless the ransomers received what they wanted. Restaurants across the country are reporting similar extortion threats — a barrage of bad reviews and a demand for money, in the form of a gift card, to stop them.

“Consumers should really read reviews with a critical eye to see if they make sense with what others have said about the restaurant. Don’t let a swindler scam you out of a great restaurant experience,” Korsmo said.

Bludorn says it reached out to Google, which initially said the one-star reviews didn’t violate policy because there were no comments included. The restaurant then posted the blackmail attempt on its social media to explain what happened and was overwhelmed when more than 100 customers submitted their own positive Google reviews.

A Google spokesperson tells CBS News the company’s teams are working around the clock to thwart these attacks, remove fraudulent reviews and put protections on business profiles that may have been affected.

Later, Google did remove reviews associated with Bludorn, but they removed both good and bad ones. Bludorn says the restaurant never lost customers but the incident happened at a challenging time as the restaurant deals with inflation.

“We can’t really raise prices because we want to stay competitive, so every guest counts right now,” Bludorn said.

Read More: Scammers demand restaurants pay up or get slammed with one-star reviews

« The best patio heaters for cool summer and fall nights