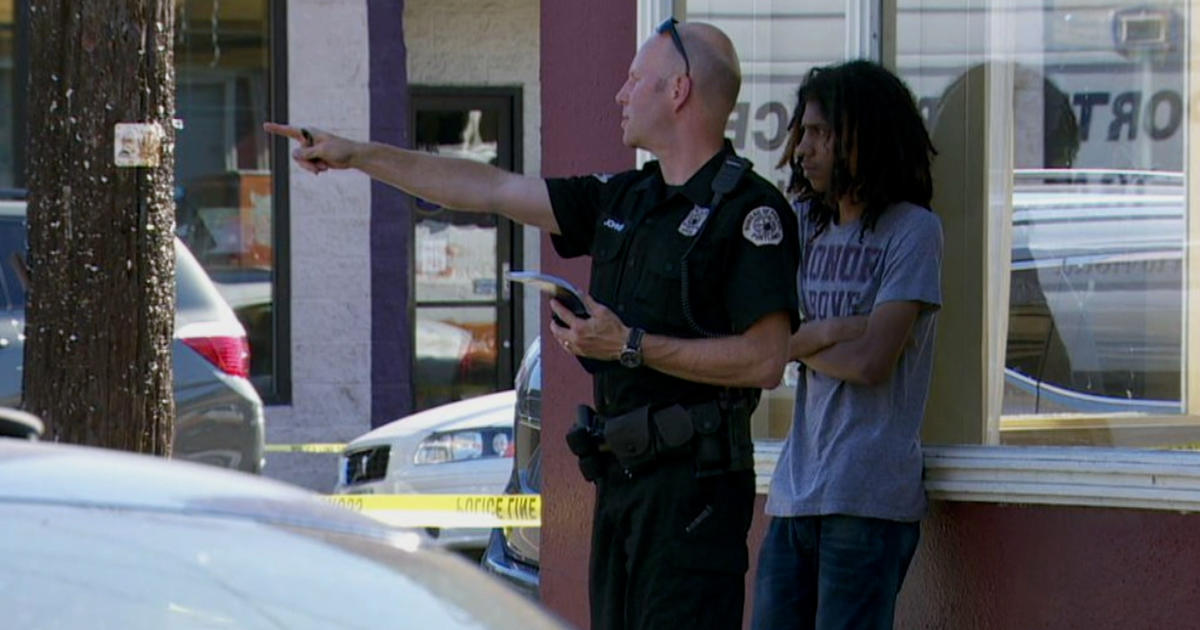 As President-elect Biden begins to engage the world, one of his most challenging relationships will be with Saudi Arabia. The oil kingdom and ally against Iran has a dismal record on human rights even in the United States. Case in point, 15-year-old Fallon Smart of Portland, Oregon. She was killed in a hit and run by a Saudi student who vanished before trial. He’s among many Saudis accused of serious crimes in the U.S. who mysteriously disappear. Their victims include Fawn Lengvenis, the mother of Fallon Smart. She told us about the day in 2016 that she drove to pick up her daughter at a shop. Fallon only had to cross two-lane Hawthorne Street to reach her mother and two siblings in their car. Fawn Lengvenis waved to her daughter, lost sight of her, and realized something was wrong.

Fawn Lengvenis: So I left my daughter– my younger daughter with a complete stranger on the corner of Hawthorne. And I ran up to Fallon with my young son still in my arms. And I started shouting Fallon’s name. She was splayed out on the-– in the middle of the street clearly very injured. So, I threw my body onto the cement next to her and was holding her hand, looking her in the eye. And we, Fallon and I, made eye contact. And she was just looking back at me kind of in shock. And, at first, I remember saying her name softly. You know, like, “Fallon, it’s gonna be okay, it’s gonna be okay.” But then when her gaze turned from acknowledgment and eye contact, and then kind of faded away into emptiness, I s– remember shouting her name louder and louder– as if maybe perhaps it would wake her up or something, I don’t know. Because when the ambulance finally made it there, I still had it in my head that we would get in the ambulance and go to the hospital. Like, that’s what we were going to do. So when the ambulance came, the original man who was giving CPR to my daughter came over to me and told me that she was dead. And I remember trying to negotiate with him, like, “No, you don’t understand. She’s– she’s not dead because she is about to graduate. And she’s going to graduate high school with a year of extra credits.” And then I remember, like, wailing for a while.

Fawn Lengvenis shows the tattoo she got to remember her daughter

In the moment before the crash, a gold Lexus was barreling toward the intersection where traffic had stopped to let Fallon cross. Police say the driver was 20- year-old Abdulrahman Noorah, a Saudi who’d been enrolled two years in a Portland Community College. Shawn Overstreet is prosecuting the case.

Scott Pelley: What is the speed limit on Hawthorne Street?

Shawn Overstreet: It was 25 miles an hour.

Noorah returned to the scene after a few minutes. He was arrested on charges of manslaughter in the first degree.

Scott Pelley: What is manslaughter in the first degree?

Shawn Overstreet: It’s when you recklessly take somebody’s life. But it has to be under conditions manifesting extreme indifference to the value of human life.

Fawn Lengvenis: He kind of just had this nonchalant attitude. And that was very disturbing to me, the, just the lack of remorse.

Abdulrahman Noorah after he returned to the scene

Prosecutors argued Noorah was a flight risk. The judge ordered bail of one million dollars, a GPS tracking bracelet and confiscation of Noorah’s passport. By law, Noorah needed only 10% of the bail, but that was $100,000. And prosecutors described his family, in Saudi Arabia, as middle class.

Scott Pelley: Did he have any trouble coming up with that?

Shawn Overstreet: Well I don’t believe that Mr. Noorah had any access to that kind of money.

Scott Pelley: Who bailed him out?

Shawn Overstreet: Saudi Consulate provided the $100,000 to Mr. Noorah so that he could bail himself out.

Two weeks before the scheduled trial, police say, Noorah was picked up by a black SUV. The SUV turned and stopped at a gravel quarry where the GPS bracelet would later be found. The SUV doubled back and headed in the direction of the airport.

Scott Pelley: Who was driving the black SUV?

Shawn Overstreet: That’s a question we don’t have an answer to right now.

Scott Pelley: You obviously checked all of the airline manifests.

Scott Pelley: Didn’t find his name on any outbound flight?

Shawn Overstreet: No. And we didn’t really expect to. Because one of the conditions of his release was he had to forfeit his passport.

Scott Pelley: How did he travel without his passport?

Scott Pelley: Where is he?

Scott Pelley: Have you asked for his return?

Shawn Overstreet: Of course. We, there’s an active warrant for his arrest. We’re waiting to prosecute. But the United States does not have an extradition treaty with Saudi Arabia.

Fawn Lengvenis: There were many people who outwardly said, “He’s gonna run.” I didn’t listen to them. I just discounted it as, I don’t know, “conspiracy,” or something.

Scott Pelley: You had faith in the–

Fawn Lengvenis: I had complete faith.

Fawn Lengvenis: Absolutely. How could he get away?

Teresa: Being raped feels like someone comes into the deepest part of you and takes a knife and slashes you open.

Teresa, who we met in 2019, asked us to use only her first name. She says, four years ago, during a party at her home, she drank too much, went to bed, and awoke to find a stranger on top of her.

Teresa: It felt like it was a dream, still. Like, but it wasn’t until I felt pain that I came to and realized it wasn’t a dream. And I had the vague recollection of pushing him out of my room and closing the door.

Scott Pelley: Did you know who it was?

Teresa: I knew who it was from that night and, like, seeing his face, you know. He had kind of a distinctive afro.

Prosecutors charged Faisal Altaleb, a Saudi national who was a student. Altaleb told police he was drunk that night.

Faisal Altaleb: I drank a lot, but I don’t remember anything. What’s the problem?

Police say Altaleb fled before he was charged. He had his passport. Whether he had help escaping, we do not know, but he’s back in Saudi Arabia enjoying the protection of the kingdom.

Scott Pelley: You have come to learn, since then, that a number of Saudi citizens have escaped justice in the United States. What do you think of that?

Teresa: This happened to me; this destroyed my life. But what’s even more disturbing than that to me is that, our government isn’t doing anything about it, I mean, there was someone else in my town, just months apart, who was raped by her Saudi Arabian roommate.

And that suspected rapist, Sami Almezaini, also fled, quickly, before he was charged. Prosecutors say he escaped to Mexico and then Saudi Arabia, where he is free.

Oregon Senator Ron Wyden, is a member of the senate intelligence committee with a top security clearance.

Scott Pelley: I take it you have seen what U.S. intelligence says about Saudi fugitives.

Ron Wyden: I’m constrained in terms of what I can say. But I can tell your viewers the Saudis pursue these cases with extraordinary sophistication. And they are certainly looking at every possible tool for being above the law.

This past January, Senator Wyden compelled the FBI to partially declassify an intelligence assessment which concludes, “Kingdom of Saudi Arabia officials almost certainly assist U.S.-based Saudi citizens in fleeing the United States…” The assessment specifies cases of rape, child pornography and manslaughter. Senator Wyden is also working to declassify what the U.S. knows about the murder of journalist Jamal Khashoggi, dismembered in 2018 by Saudi intelligence agents.

Scott Pelley: I wonder what you thought when you heard about the murder of Jamal Khashoggi, the Washington Post columnist, who was killed in the Saudi Consulate in Turkey?

Fawn Lengvenis: That was the first time that I really understood the enormity of what had touched my life. You know what I mean? Because, before this, it was a hit and run. It was a dumb kid. And then it grew into me realizing that I was dealing with something much larger and much darker and much more violent. And something powerful, something that had influence in our government. And that terrified me.

Scott Pelley: We have spoken to people at the FBI who say, “Look, these are tragic cases. But it’s far more important for the United States to work with Saudi Arabia on terrorism than worry about a few dozen fugitives.”

Ron Wyden: I just don’t buy the idea that fighting terrorism and securing justice are mutually exclusive. Our government oughta be doing both.

Saudi officials declined an interview but, in an email, they said, “the notion that the Saudi government actively helps citizens evade justice…is not true.” “This is evidenced by the fact that a number of Saudi citizens are currently serving prison sentences in the U.S.” But the man who is wanted in the death of Fallon Smart can be found these days on social media, enjoying the protection of the Saudi Kingdom.

Fawn Lengvenis: I think we do need to reexamine our relationship with Saudi Arabia. So that we can guarantee the safety of American citizens because I don’t want this to happen to another family. My daughter’s gone. And I’ll miss her. But she’s gone.

To keep the memory of Fallon Smart alive, her mother has a tattoo recalling Fallon’s favorite children’s book, “The Giving Tree.” Fallon’s ashes are mixed in the ink.

« How a questionable syndrome, ‘excited delirium,’ could be protecting police officers from misconduct charges