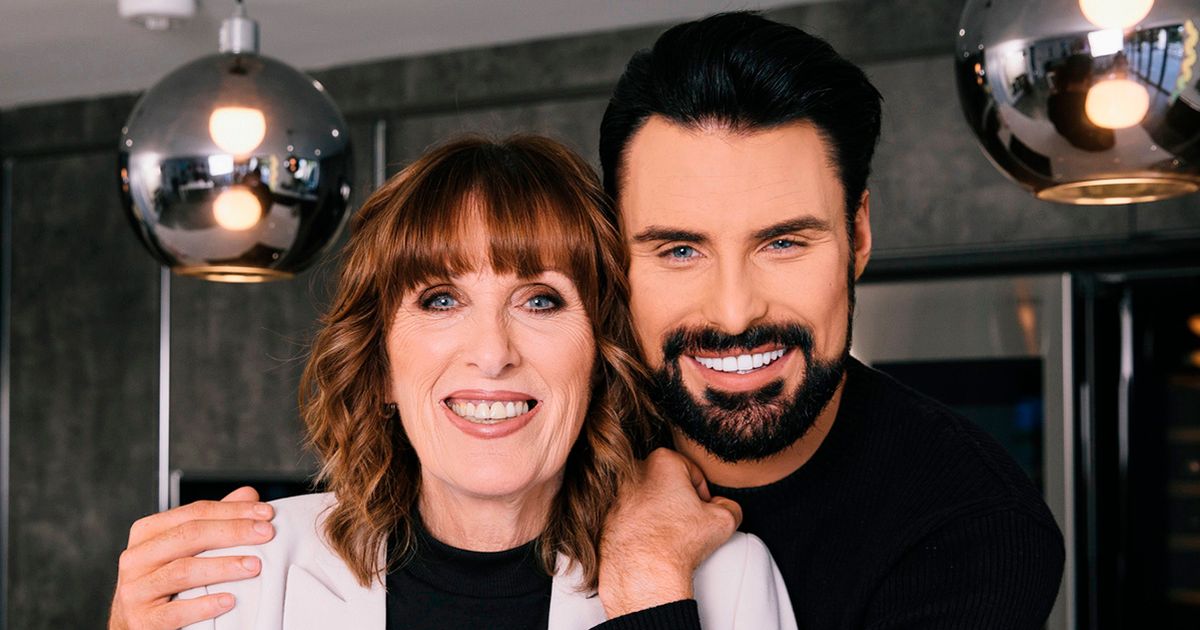 Rylan has opened up about finding fame, how he’s built his career and being asked to be a part of the Queen’s Platinum Jubilee 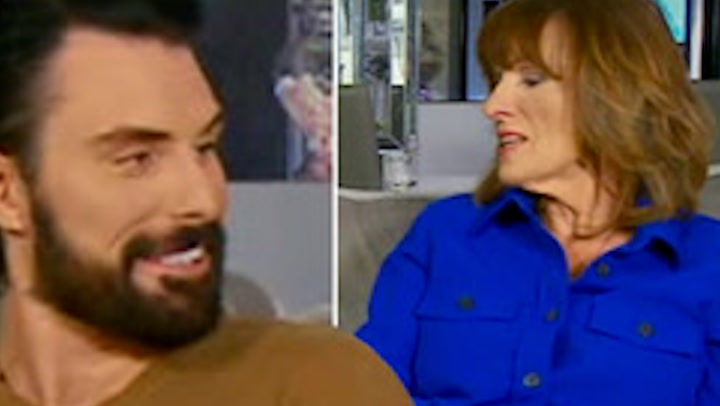 Rylan Clarke’s mum blurts out his real name in 2020

He’s a 33-year-old self-made millionaire who burst onto our screens on X Factor a decade ago. But Rylan Clark will always be “my little boy, Ross” to his mum Linda.

As we catch up with Essex’s most iconic duo, the Radio 2 presenter and certified national treasure, born Ross Richard Clark, is getting a ticking off for dodging his beloved mum’s calls.

“Do you want to tell them how much you ring me?” asks Rylan. “You ring me 17 times just to tell me to put the bins out!”

It’s this playful dynamic that has seen the pair become Celebrity Gogglebox favourites once more, following their return to the series after a year away due to Linda’s battle with Crohn’s disease (a chronic inflammation of the intestines).

The pair feature on Gogglebox together

After undergoing three major operations, Linda, 69, tells us she has just 70cm of bowel left (we usually have 2m) and has been fitted with a stoma bag. Her vulnerability has prompted Rylan to install TV monitors in her home to keep a constant watch.

Meanwhile, Linda recalls how a heartbroken Rylan slept with her in her bed following his high-profile split from husband-of-six-years Dan Neal last summer, and the 6ft 4in star’s weight plummeted to 9st.

Here, Rylan and Linda share a rare insight into their close bond…

Rylan was part of the Queen’s Platinum Jubilee

Hi, Rylan and Linda. It’s a joy to see you back on Celebrity Gogglebox together. How do you feel, looking back at the past 12 months?

It must have been heartbreaking seeing your son in such a bad way?

Linda: Oh don’t! It was really hard last year. He’s got this beautiful home, but he was here with me. He couldn’t sleep so I said, “Get in my bed with me.” I didn’t know what he was thinking of doing. He’d lost so much weight, he was just staring all the time. I was crying all day with him, and I was forcing him to eat.

How did you find the strength to fight back, Rylan?

Rylan: I gradually had the realisation that I wasn’t a bad person – break-ups can do that to you. Exercise was a big thing and I got on a diet plan to build weight, which helped physically and mentally. When I do a session with my trainer Scott, we put the world to rights. It’s like a therapy session. I take every day as it comes now. There are some mornings I wake up and think, “F**k I don’t want to go to work today,” but I’m lucky to still be working.

Linda has opened up about living with Crohn’s

Why did you take a three-month break from social media?

Rylan: Social media is an amazing tool for business and connectivity, but sometimes I need a break to realise it’s not completely real. There are some sad bastards on Twitter, and they ain’t going to say it to your face. If they want to, try it – I’m 6ft 4in!

Rylan: Be nice to everyone around you, and especially those on the way up, because everyone can fall. I had a bad fall last year, and when I came back everyone was waiting for me. If I was an a**ehole they would have kicked me right out. All of my employers were amazing. Radio 2 and the BBC told me to take as long as I needed.

Your teeth were your trademark. Why did you replace them?

Rylan: It was physical as well as mental. Mentally, I had this massively new start in my life, so I thought let’s change my body physically to how I want it to be. That’s why I started the fitness, and why I got my teeth re-done.

Linda: And they do look better, because they’re a bit smaller.

Linda: I’ve had four crowns changed at the front, but I could hit him because every time I’m on Radio 2 he says, “How’s your teeth, Mum?” I say, “I ain’t had them all done yet, so why are you telling everyone?” Now when I’m outside I’ve got to put my face mask on in case anyone’s looking at me. I’ve had four crowns in the front of my teeth since…

How is your health, Linda?

Linda: I’m not well a lot of the time. I have nurses come round every morning and evening to give me a special feed. I’ve had Crohn’s since I was 30 and used to be in so much pain I’d be crying all the time. It was unbearable – I felt like I wanted to get a knife and punch my stomach open. I’ve had three major bowel operations, and with the last one I got a stoma bag. Now I don’t have pain, which is a relief, but I’ve got to have nutrition put in me. Everything goes straight through where I’ve hardly got any bowel left.

We’re sorry to hear that. What’s the prognosis?

Linda: I’ve only got 70cm of bowel now, so if I have a drink of water I’ve got to empty the stoma straight away. My life is in the bathroom. I don’t know how long it will be until the doctors can’t do any more. I feel alright, but I get down because I can’t go out and I can’t do what I want to do.

That must be tough for you too, Rylan?

Rylan: I’ve got cameras in Mum’s house, so I can see her and make sure she’s OK. That’s why we agreed to do Gogglebox, because my mum feels comfortable and it’s at my house. She’s not physically doing anything, she’s just sat on my sofa.

Linda said she can’t leave the house much

When you’re filming, are you terrified of saying the wrong thing and getting cancelled?

Rylan: Oh believe me, I’m f**king terrified. Let’s put it this way, it’s lucky the editors like us, because some of the things she’s come out with are career-ending.

Linda: Yeah, but we’ve always been like that, haven’t we, Ross? You know I call him Ross and not Rylan, don’t you?

Your presenting career is booming with gigs on Radio 2 and Eurovision. You must be proud of how far you’ve come?

Rylan: I’m very grateful. Ruth Langsford and Eamonn Holmes have always helped me with my career and told me what’s right and wrong.

Would you be up for taking over the coveted breakfast slot on Radio 2?

Rylan: I did it for a week, standing in for Zoe Ball, and I felt like death by Thursday. Give me another few years and we’ll discuss that.

Linda: I bet he didn’t even go to bed early. He probably went in on two hours’ sleep.

Rylan discussed how his career is going

Do you really think the Radio 2 studio is haunted (earlier this year, technical hitches prompted Rylan to say it had ghosts)?

Rylan: Yes, I swear something is in that studio! I am 100% sure I have seen people walk behind me before.

Linda: Did I come in on that day?

Linda: Oh my God, you never told me that!

Now you’re single, would you consider going on Love Island?

Rylan: I would now, f**k it! I’d be embarrassed though. If I went on Love Island, I’d have to go on a foreign one like Australia or Italy, so nobody knew who I was.

Linda: When we were in Paris nobody really knew you, did they? Nobody took any notice until we went up the Eiffel Tower and someone recognised you.

Rylan: And I had a breakdown? Yeah.

You joined around 150 British celebrities to star in the Queen’s Platinum Jubilee Pageant. Did you meet the royals?

Rylan: They said they were doing an open-top bus parade with national treasures and they’d love me to be one. I was shocked. We were supposed to go and meet them [the royal family] somewhere, but we ended up going for a drink instead. I was with Holly Willoughby and Nicole Scherzinger and it was so nice to be with people who are actual mates. Gok Wan was there, too. All we did was laugh. None of us knew the Queen was going to come out on the balcony. It was an absolute moment. Not many countries do it how we do.

Celebrity Gogglebox is marking 50 years of Pride. What does Pride mean to you?

Rylan: I’m lucky to live in a world where I’m not frightened to be who I am. The only reason I can do that is because of the people who have come before me. I would love for the day where LGBTQ+ awards don’t exist and it’s all one where everyone matters – it doesn’t matter where you come from, what you look like, what your skin colour is, or who you’re having a relationship with. None of it f**king matters.

What advice would you give to someone struggling with their sexuality?

Rylan: Find someone you can talk to and trust. If someone loves you, whether you’re their son, daughter, brother or sister, they’re going to be there for you. If you feel you haven’t got anyone around to have that conversation with, there are places with people to talk to. My DMs are open – just DM me.

What age did you go public with your sexuality?

Linda: His circle of friends, oh my life, they were beautiful girls. He was always out with them.

Rylan: Let’s put it this way, when Mum was told I was gay, someone said to her, “Look, he’s got something he wants to tell you,” and the first thing she said was…

Rylan and Linda: “Oh my God, don’t tell me you’ve got a girl pregnant!”

Linda: I had no idea, but all my friends did. Ain’t it funny?

How significant is it that Blackpool football player Jake Daniels has come out?

Rylan: It’s really important. I messaged him and we’ve had a few chats. He’s a nice guy and it’s really brave, but I hate having to say it’s brave. I want to get to a point where it isn’t news. I’m over there at West Ham, mincing about, screaming and drinking wine. It’s fine! Let’s be honest, we all know there are gay footballers out there, some more than others. Let’s just leave it at that.