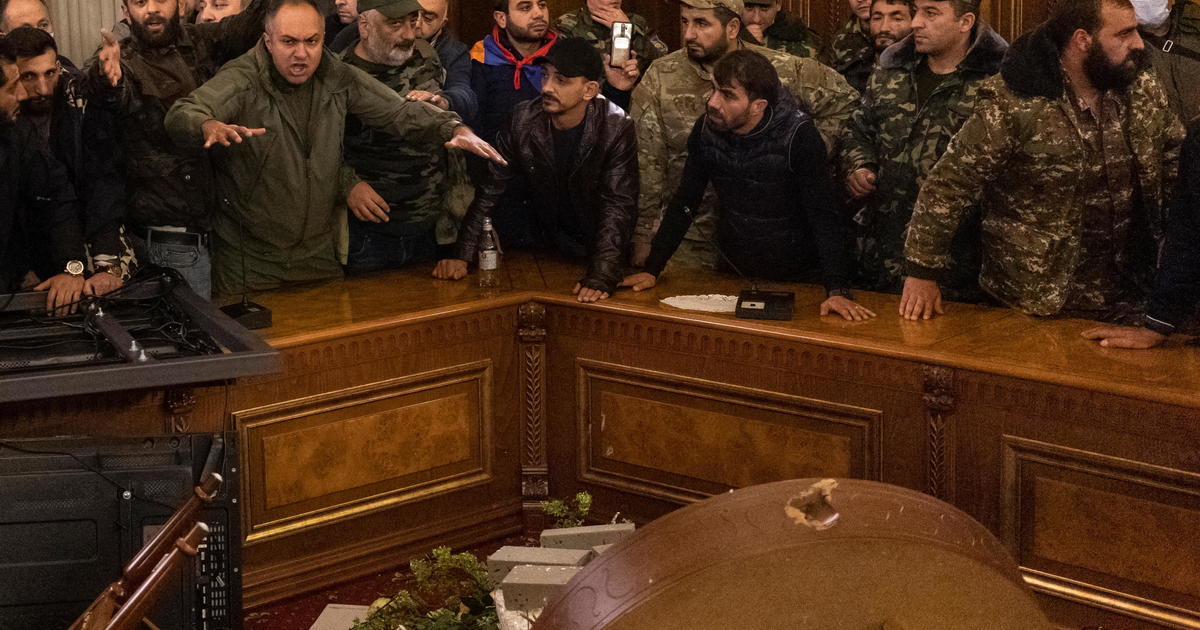 Russia brokers Armenia-Azerbaijan ceasefire, but only 1 side is happy

Protesters react inside the parliament after Armenian Prime Minister Nikol Pashinyan said he had signed an agreement with leaders of Russia and Azerbaijan to end the war with Azerbaijan, in Yerevan, Armenia, November 10, 2020.

Moscow — The announcement of a Russia-brokered ceasefire to end six weeks of deadly clashes between Armenia and Azerbaijan late Monday quickly sparked fierce protests in Armenia’s capital. An angry crowd stormed government buildings in Yerevan on Tuesday, while in Azerbaijan, people took to the streets to celebrate.

The two nations have disputed ownership of the mountainous enclave of Nagorno-Karabakh in the Caucuses region for decades. The region is internationally recognized as part of Azerbaijan, but it has been governed autonomously by and is primarily populated by ethnic Armenians.

A ceasefire reached after a bloody war over the region in the 1990s was first broken in late September, leading to the worst clashes in decades. The violence has left thousands dead on both sides and displaced more than 100,000 people from their homes.

Under the new deal signed by the leaders of Russia, Armenia and Azerbaijan and published by the Kremlin, a ceasefire took effect in Nagorno-Karabakh on Tuesday. The agreement states that Azerbaijan holds onto portions of Nagorno-Karabakh seized by Armenian forces over the last several weeks of fighting. Armenia must withdraw from several adjacent areas this month but can keep control of the rest of the region.

“The agreements will create the necessary conditions for a lasting and full-scale settlement of the crisis over Nagorno-Karabakh on a fair basis,” Russian President Vladimir Putin said in a video statement on Tuesday, adding that it was in “the interests of the people of Armenia and Azerbaijan.”

The agreement announced by Putin’s government also says Russia will deploy 1,960 armed peacekeepers to patrol the frontlines of the conflict. Russian state media showed video of peacekeepers and armored personnel carriers boarding military aircraft and leaving for Nagorno-Karabakh on Tuesday.

We are proud of our people, of our Armed Forces! For our people, these days are the happiest ones. And I am also happy to deliver this pleasant news to my people.

President Ilham Aliyev of Azerbaijan has referred to the ceasefire agreement as a “capitulation” by Armenia, praising the agreement and his army’s military success. “For our people, these days are the happiest ones.” he wrote on Twitter.

In a Facebook post titled in part, “my sin,” Armenian Prime Minister Nikol Pashinyan called his decision to sign the deal “unbelievably painful.” It has proven a deeply unpopular move in his country.

“I made that decision as a result of an in-depth analysis of the military situation and the assessment of people who know the situation best,” Pashinyan’s statement said. “Also based on the belief that this is the best possible solution to the current situation.”

Armenia’s Pashinyan and senior officials in Nagorno Karabakh said they were forced to seek a peace deal by military commanders.

Protesters react inside the parliament after Armenian Prime Minister Nikol Pashinyan said he had signed an agreement with leaders of Russia and Azerbaijan to end the war with Azerbaijan, in Yerevan, Armenia, November 10, 2020.

Shortly after his statement, hundreds of outraged protesters broke into the parliament building and the lobby of the prime minister’s official residence in Yerevan. Social media videos showed people chanting and accusing Pashinyan of betrayal. Parliament Speaker Ararat Mirzoyan was attacked and beaten during a protest on the street.

But in Azerbaijan’s capital of Baku, it was a very different scene. Crowds of people danced, sang and waved national flags overnight, despite a curfew.

The Armenian leader in Nagorno-Karabakh, Arayik Harutyunyan, said the ceasefire had been unavoidable after significant battleground losses.

“If the fighting had continued, we would have lost the whole of Artsakh within a few days,” he said in a video statement, referring to Nagorno-Karabakh. “And we would have had more victims.”

The war has also been complicated by Turkey’s open backing of Azerbaijan. Aliyev said Turkey would also be involved in the peacekeeping process, but he didn’t elaborate.

Azerbaijan’s President Ilham Aliyev gestures during his address to the nation in Baku, Azerbaijan, in a picture released November 10, 2020 by his official website.

The ceasefire document calls for secure transport links to be established through Armenia, linking Azerbaijan and its western exclave of Nakhchivan, which is surrounded by Armenia, Iran and Turkey.

It also stipulates the exchange of all prisoners, detainees and the bodies of those killed in the recent fighting. Russia’s president last month estimated that some 5,000 people had died in the flareup – both military personnel and civilians.

Read More: Russia brokers Armenia-Azerbaijan ceasefire, but only 1 side is happy

Ex-girlfriend on dating dark web mastermind wanted by the FBI »