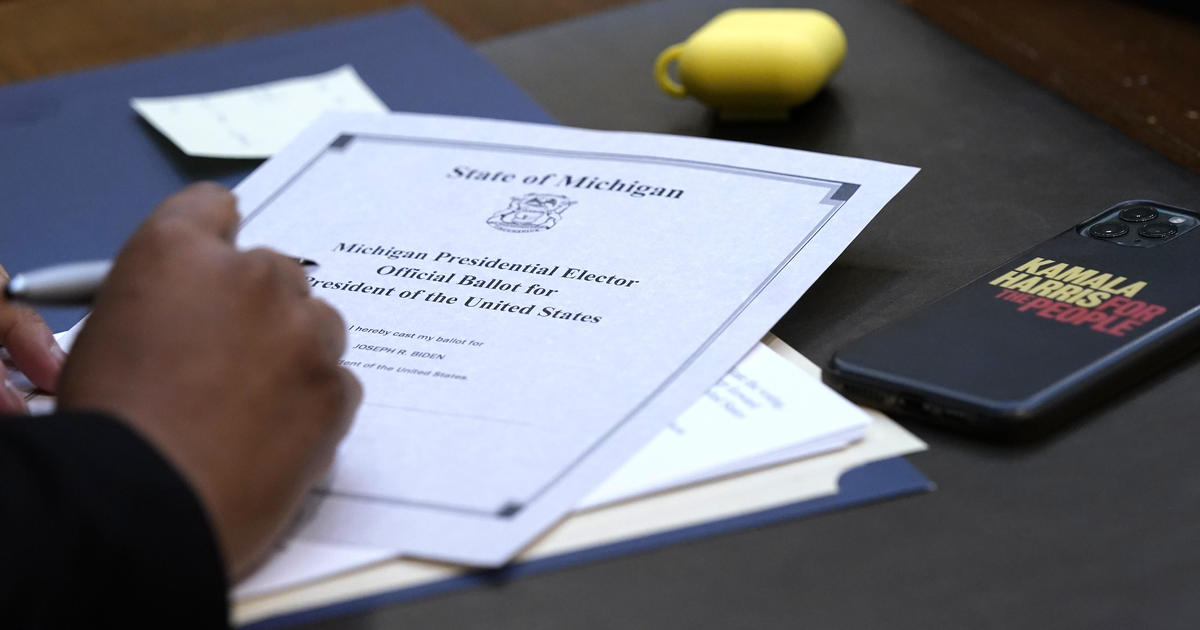 Washington — Senate Republicans who in the weeks since the election declined to recognize President-elect Joe Biden as the winner of the presidency have now begun to acknowledge Mr. Biden as the next president after Monday’s meeting of the Electoral College that affirmed his victory.

With California’s 55 electors casting their votes for Mr. Biden, the president-elect cleared the 270-vote majority he needed to secure the White House and deny President Trump a second term. Electors from all 50 states and the District of Columbia gathered across the country Monday to vote individually by paper ballot for the president and vice president, and those votes will be counted by Congress on January 6.

The formalization of Mr. Biden’s victory with the Electoral College vote marks a turning point for Republicans who have defended the president in his unsuccessful efforts to challenge the results of the presidential election and said the legal process and recounts should play out before they would recognize Mr. Biden as the president-elect.

“I think he’s president-elect subject to whatever additional litigation is ongoing. I’m not aware of any,” Republican Senator John Cornyn of Texas told reporters of Mr. Biden, adding “there comes a time when you have to realize that despite your best efforts, you’ve been unsuccessful. That’s sort of the nature of these elections. You got to have a winner. You got to have a loser.”

GOP Senator Mike Braun of Indiana said that while he was disappointed by the results of the Electoral College vote, “today marks a watershed moment where we must put aside politics and respect the constitutional process that determines the winner of our presidential election.”

Senator Rob Portman, a Republican from Ohio, said the vote of the Electoral College “makes clear that Joe Biden is now president-elect.”

“I think we need to respect this process the Founding Fathers established, and we must respect the will of the voters,” he said in a statement. “As I’ve said previously, the Trump campaign had every right to pursue recounts and legal challenges. That has now happened over the past six weeks, and although there were instances of fraud and irregularities, it has not been shown to be widespread enough to change the result of the election.”

Senator Shelley Moore Capito of West Virginia told reporters “it’s time to turn the page and begin a new administration,” while Senator Roy Blunt of Missouri said the constitutional process for electing the next president has played out.

“The electors have voted, so there’s a president-elect,” he said. “We have the constitutional threshold and we’ll deal with Vice President Biden as the president elect.”

South Carolina Senator Lindsey Graham, a Republican who is one of Mr. Trump’s closest allies in Congress, told reporters “it’s a very, very narrow path for the president” to reverse the outcome of the election, adding, ‘I don’t see how it gets there from here, given what the Supreme Court did.”

Graham revealed he and Mr. Biden had a “pleasant” 10-minute phone conversation some time ago, and aides to the president-elect confirmed to CBS News that the two spoke privately after the election about ways they could work together.

While Mr. Biden was projected the winner of the presidential election November 7 and has announced nominees and appointees to key positions in his administration, the president has refused to concede, instead claiming that the election was rife with fraud.

Mr. Trump filed lawsuits in a slew of key states where he lost, alleging millions of illegal ballots were cast against him, and asked federal and state court judges to block certification of the election results. But his legal challenges were largely unsuccessful and dismissed due to a lack of evidence to support those claims.

Last week, Texas, with the backing of 17 attorneys general, more than 100 House Republicans and the president, filed a lawsuit directly with the Supreme Court seeking to overturn the results of the election. Texas Attorney General Ken Paxton asked the court to block electors from four battleground states from voting in the Electoral College, but the Supreme Court rejected his bid.

Despite the president’s willingness to accept the results of the election, Mr. Biden’s transition officially began last month, and he and Vice President-elect Kamala Harris are receiving high-level intelligence briefings.

The president-elect, who won a total of 306 electoral votes, celebrated his victory in a speech Monday night and said it’s “now it is time to turn the page, to unite, to heal.”

Ed O’Keefe contributed to this report