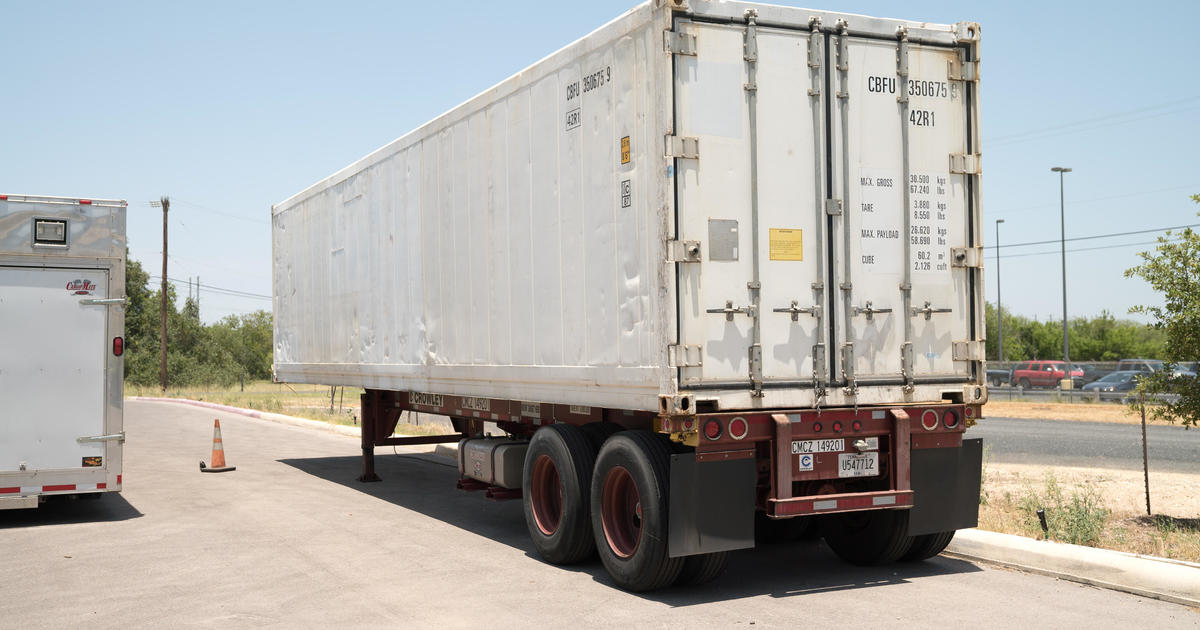 Refrigerated trucks requested in some states as morgues fill up

Refrigerated trucks have been requested in Texas and Arizona as coronavirus deaths continue to rise. They are among the states that have recently seen a surge in COVID-19 cases.

In San Antonio, Texas, there is an issue of morgue space at hospitals, so refrigerated trucks are at the ready, Bruce Davidson, director of communications for the San Antonio mayor’s office, told CBS News on Tuesday.

During a meeting on COVID-19 with San Antonio and Bexar County officials on Monday, San Antonio Mayor Ron Nirenberg also said refrigerated trucks were requested, adding that just 10 percent of hospital beds in the county were available.

“We are nowhere near the sustained decline in cases. …The hospital system as a whole, as we said, is under severe stress,” Nirenberg said.

When asked during Monday’s meeting about the need for refrigerated trucks in Bexar County, where San Antonio is located, Dr. Ken Davis, chief medical officer of Christus Santa Rosa Health System, said it is a “hard thing to talk about – people’s loved ones are dying.”

This July 15, 2020 photo shows a refrigerated trailer that the San Antonio health authorities acquired to store bodies as morgues at hospitals and funeral homes reach capacity.

City of San Antonio via Reuters

Over 19,600 COVID-19 cases have been reported in Bexar County, making it one of the Texas counties with the most confirmed infections, behind Harris and Dallas counties. In total, there have been over 275,000 coronavirus cases across the state and 3,322 people have died there due to the virus.

In Nueces County, which includes the city of Corpus Christi, there have been 6,427 confirmed cases. The county’s medical examiner, Dr. Adel Shaker, told the Texas Tribune late last week that he requested an extra morgue trailer, provided by FEMA.

The publication reported that the morgue in the county was full. The morgue building has a 12-body capacity, and the refrigerated trucks would accommodate up to 40 more bodies, the Texas Tribune reported. CBS News has reached out to Shaker and other Nueces County officials for more information.

In Arizona, which has seen more than 131,000 cases since the start of the pandemic, more than 2,400 people have died due to the virus. As of Tuesday, 90% of adult ICU beds in the state were in use, up from 62% three months ago, according to data from the state’s department of health.

At a recent meeting with Phoenix Mayor Kate Gallego’s office, the Maricopa County Medical Examiner’s Office said the medical examiner was at 96% capacity and working to secure a contract for refrigerator trucks, Arizona’s Family reported. The medical examiner was also looking at additional staffing, according to Fields Moseley, a spokesperson for Maricopa County, Arizona’s Family reported.

Refrigerated trucks were also used at the height of the outbreak in New York City, which was once the epicenter of the pandemic.

This March 31, 2020, shows medical workers removing a body from a refrigerator truck outside of the Brooklyn Hospital in New York City.

Read More: Refrigerated trucks requested in some states as morgues fill up