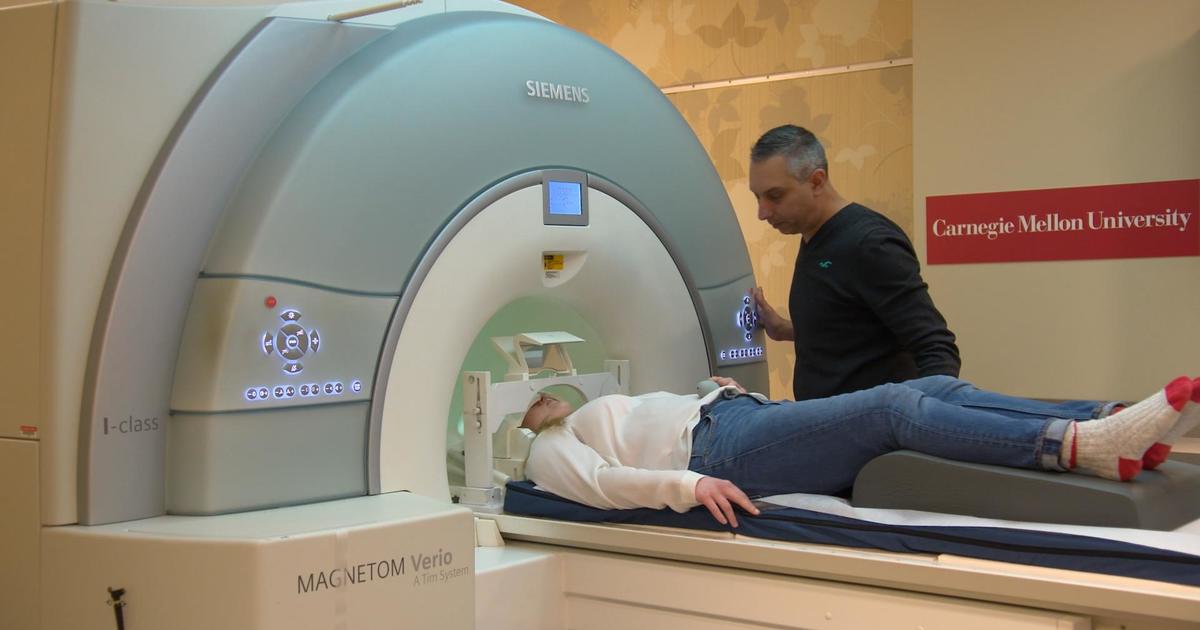 Reading minds with an MRI machine

Who among us hasn’t wished we could read someone else’s mind, know exactly what they’re thinking? Well that’s impossible, of course, since our thoughts are, more than anything else, our own — private, personal, unreachable. Or at least that’s what we’ve always, well, thought.

The art of the 60 Minutes follow-up

60 Minutes Rewind: Revisit our first report on mind reading, from 2009

As we reported last fall, advances in neuroscience have shown that, on a physical level, our thoughts are actually a vast network of neurons firing all across our brains. So if that brain activity could be identified and analyzed, could our thoughts be decoded? Could our minds be read? Well a team of scientists at Carnegie Mellon University in Pittsburgh has spent more than a decade trying to do just that. We started our reporting on their work 10 years ago, and what they’ve discovered since, has drawn us back.

In Carnegie Mellon’s scanner room, two floors underground, a steady stream of research subjects come to have their brains and thoughts “read” in this MRI machine. It’s a type of scanning called functional MRI, FMRI.

That looks at what’s happening inside the brain as a person thinks.

Neuroscientist Marcel Just says this technology has made it possible for the first time to see the physical makeup of our thoughts.

When we first visited Dr. Just’s lab ten years ago, he and his team had conducted a study. They put people in the scanner and asked them to think about ten objects, five of them tools like screwdriver and hammer and five of them dwellings like igloo and castle, while measuring activity levels throughout their brains. The idea was to crunch the data and try to identify distinctive patterns of activity for each object.

Lesley Stahl: You had them think about a screwdriver.

Lesley Stahl: And the computer found the place in the brain where that person was thinking “screwdriver?”

Marcel Just: Screwdriver isn’t one place in the brain. It’s many places in the brain. When you think of a screwdriver, you think about how you hold it, how you twist it, what it looks like… Lesley Stahl: And each of those functions are in different places?

He showed us that by dividing the brain into thousands of tiny cubes and analyzing the amount of activity in each one, his team was able to identify unique patterns for each object.

Incredible, but only the beginning. In the decade since, Professor Just’s lab has taken this technique and applied it far beyond hammers and igloos, to increasingly complex thoughts. This is basic science, knowledge for knowledge’s sake. Not trying to cure disease, but to understand the fundamental workings of our bodies, and in this case, of our minds.

One of Dr. Just’s main questions was whether he could find patterns for abstract ideas, so he did a study asking people to think about forgiveness, gossip, spirituality. Could they be identifiable in the brain the way the screwdriver was?

Remarkably, the answer was yes. This was the activation pattern when people thought about spirituality. And this was gossip.

Lesley Stahl: One of my favorite subjects.

Marcel Just: And you see a slightly different pattern.

One difference between the two was in areas of the brain scientists had already shown become active when we think about other people. Circled in blue. Those areas lit up bright red when subjects thought about gossip; not so much for spirituality.

In another study, Dr. Just tested whether patterns are the same when people think in different languages. They are. And he’s asked acting students to conjure up emotions in the scanner to see if feelings have distinctive activation patterns too.

Lesley Stahl: And what did you find?

Marcel Just: Each emotion had its own characteristic values. And you could tell which one was which.

Lesley Stahl: And it’s the same in every head.

Marcel Just: Amazingly, it was common across people.

Common across people? Does that mean we could put our colleague, associate producer Jaime Woods, into a scanner for the first time, and Dr. Just’s team would be able to identify her emotions?

Brain scans that can identify emotions

For nine seconds each, Jaime’s job was to think of little scenarios that would conjure up the feelings on the screen. After she came out, a computer program took the brain activation data gathered by the scanner and tried to decode her thoughts.

Lesley Stahl: So what were you thinking about for disgust?

Jaime Woods: I was thinking of someone throwing up on me (LAUGH) at, like, a baseball game.

So could the computer read her brain patterns and tell what she’d been feeling?

COMPUTER VOICE: The program’s answer is “I think the emotion is disgust.” The experienced emotion was actually disgust. That was correct.

COMPUTER VOICE: “I think the emotion is envy.”

Lesley Stahl: What were you thinking for envy?

Jaime Woods: I was just thinking of beautiful models.

The computer program got all of Jaime’s emotions right.

Marcel Just: And it’s funny isn’t it because it’s so personal. We all think of our own thoughts as so individual, so intimate, how could anybody else’s thoughts be like mine? And they are.

Marcel Just: Yes, feelings. Now, obviously, people think very different thoughts. But, you know– like, people choose to do different things with their bodies. But they all walk putting one foot in front of the other. Nobody walks sideways. Nobody walks backwards systematically. There’s something about the biological apparatus that makes you act in a certain way with your body. And I don’t think we realize the degree to which the biological apparatus that we have in our skulls governs, shapes the way we think.

Professor Just’s goal is to one day create a dictionary of brain activation, a key to what all different thoughts look like inside our minds. But he also started wondering whether those definitions might be different in people with disorders like autism.

Prior research had found structural differences in the brains of people with autism, so the question was whether thought patterns might differ too.

Dr. Just’s team recruited 17 adults with autism and asked them, as well as 17 control subjects, to think about social interactions like adore, hug, humiliate. Challenging terrain for many with autism. The results were striking, the activation patterns differed enough to tell who had autism and who didn’t with 97% accuracy.

Marcel Just: The people with autism thought of these social interactions apart from themselves.

As he showed us in findings for the word “hug,” the key differences were in brain regions that activate when we think about ourselves, circled in blue.

Marcel Just: There, and there. Those areas light up much more among the controls.

Marcel Just: They thought of it more like a definition of “hug” without self involvement.

Lesley Stahl: And that, you saw, with word after word?

David Brent: I just thought, “Wow, this is the coolest thing I’ve heard in I don’t know how long.”

David Brent is a psychiatrist at the University of Pittsburgh Medical Center, where he runs a clinic for suicidal adolescents. He happened to attend a talk Marcel Just was giving about his autism findings and immediately wondered about his own patients.

David Brent: So I went up to him afterwards and I said, “Would you be interested in talking about maybe doing a study on suicide?”

Lesley Stahl: You hear about cases of suicide where the person had been depressed, but you also hear of situations where people say, “There was nothing wrong.”

David Brent: Suicide is a great mystery, because the person who knows the most about why it happened isn’t there to talk with. You try to reconstruct what happened but nobody has a window into people’s, you know, interior– thoughts.

Nobody, that is, except someone with a mind-reading device. Dr. Just and Dr. Brent began planning a pilot study to see if the scanner might reveal what is altered in the thoughts of people contemplating suicide. They reached out to Matt Nock, a Harvard professor who has studied how difficult it is for doctors and emergency rooms to know which patients are safe to send home.

Lesley Stahl: Is this the first time anybody’s looked inside the brain to see– about suicidal thoughts?

Matt Nock: Yes. This is the first study I– I have ever heard of where someone’s looked in the brain of someone who’s suicidal, who’s actively thinking about death or suicide–

Dan Toski: You don’t see life as something that’s going to be fixed. The only way to get out of it is to kill yourself.

Lesley Stahl: Do you think in terms of the word pain?

Dan Toski: Pain is when you break a limb or you have a migraine, and it hurts so bad that you can’t see, This being depressed and suicidal, it– it’s much greater.

Dan Toski: Much greater than pain.

To be in the study, subjects had to have had suicidal thoughts within the prior month. They, and control subjects, were asked to think about words like funeral and death. As well as positive words including praise, good, and carefree. In both categories, the suicidal group differed from controls.

As with the autism study, the key differences turned out to be in those self-related areas. They lit up bright red among suicidal subjects when they thought about death-related words.

David Brent: I give you the word funeral, you know, what do you think about? Maybe your grandmother’s funeral, or something like that.

David Brent: A suicidal person is much more likely to say, “My funeral.”

For positive words, the findings were exactly the opposite. When the non-suicidal controls thought about the word “carefree,” they thought about something that involved themselves; suicidal subjects significantly less so.

Lesley Stahl: Did you ever imagine that you could ask people to think about the word “carefree,” and you’d be able to tell if someone was having suicidal thoughts? It’s–

Marcel Just: It’s a lot of fun, if you’re a basic scientist, to discover how things work. But it becomes– there’s an extra level of gratification when you learn that it’s possibly helpful and useful.

The art of the “60 Minutes” follow-up

This work is still in its infancy. Dr. Just, Dr. Brent, and Dr. Nock are doing a larger, NIH-funded study to collect more data. And while for now it’s too costly and cumbersome to put people into MRI scanners to see if it’s safe to release them from the hospital…

Lesley Stahl: If they could come up with an easier way to do this–

Matt Nock: Absolutely. Just like the first GPS was, you know, a big computer in a big room, and now it’s in all of our phones, if there is a way to a few steps down the road make much more compact this approach and bring it into emergency rooms and outpatient clinics, it could go a huge way towards moving forward clinical care.

But as this technology advances toward fulfilling its full promise, it’s hard not to also wonder about its peril.

Lesley Stahl: Will it ever be possible to read someone’s thoughts precisely?

Marcel Just: The thoughts are there precisely, if you could just get close enough to the electrical activity.

Lesley Stahl: You think one day we’ll figure out how to do that.

Lesley Stahl: Which means that we’ll never be able to have– our thoughts completely secure within ourselves. Marcel Just: I think it will be technologically possible to invade people’s thoughts. But it’s– it’s our societal obligation to make sure that never happens.

« 2nd wave of coronavirus could be weeks away, experts warn

Extracting confessions from a serial killer »