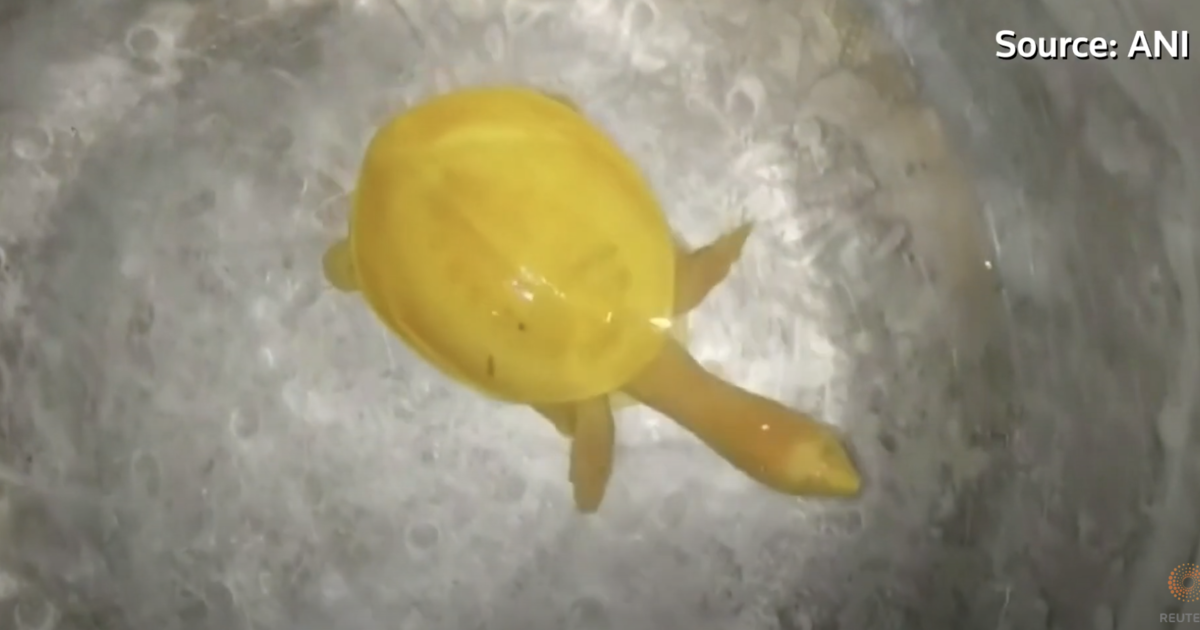 A rare yellow turtle was spotted in India on Sunday and the unusual creature is mesmerizing people across the world. Local residents in Balasore first spotted the turtle, according to Reuters. Video of the animal, which at first glance looks more like a lemon than a reptile, has gone viral online.

The turtle was handed over to forest officials. Wildlife experts say it is possibly an albino mutation of a common turtle, Reuters reports.

Albinism is a type of genetic disorder where there is little or no production of pigment in the skin, eyes and hair — or in other species the fur, feathers or scales.

National Geographic says albinism is rare but can affect many different animals. Some albino animals may have difficulty in the wild. Albinism in mammals may affect the color of the fur, skin and eyes. Non-mammals animals, like the turtle, can also be albino, but they may not appear fully white because they can produce other pigments in addition to melanin.

In an interview with Asian News International (ANI), Wildlife Warden Bhanoomitra Acharya said it was a unique find. “This turtle that was rescued, its skull and body are yellow, truly it is very rare. I have not seen such a turtle in my life ever,” he said.

Odisha: A yellow turtle was rescued by locals from Sujanpur village in Balasore district. It was later handed over to Forest Department officials. B Acharya, Wildlife Warden says, "This is a rare turtle, I have never seen one like this." (19.07.20) pic.twitter.com/MWxjLzabyc

Another rare turtle was also recently spotted in the area, ANI reports. Last month, a Trionychidae turtle, which is a softshell turtle usually found in Africa, Asia and North America, was caught by a fisherman. The turtle was later released back into the area where it was found, according to ANI.