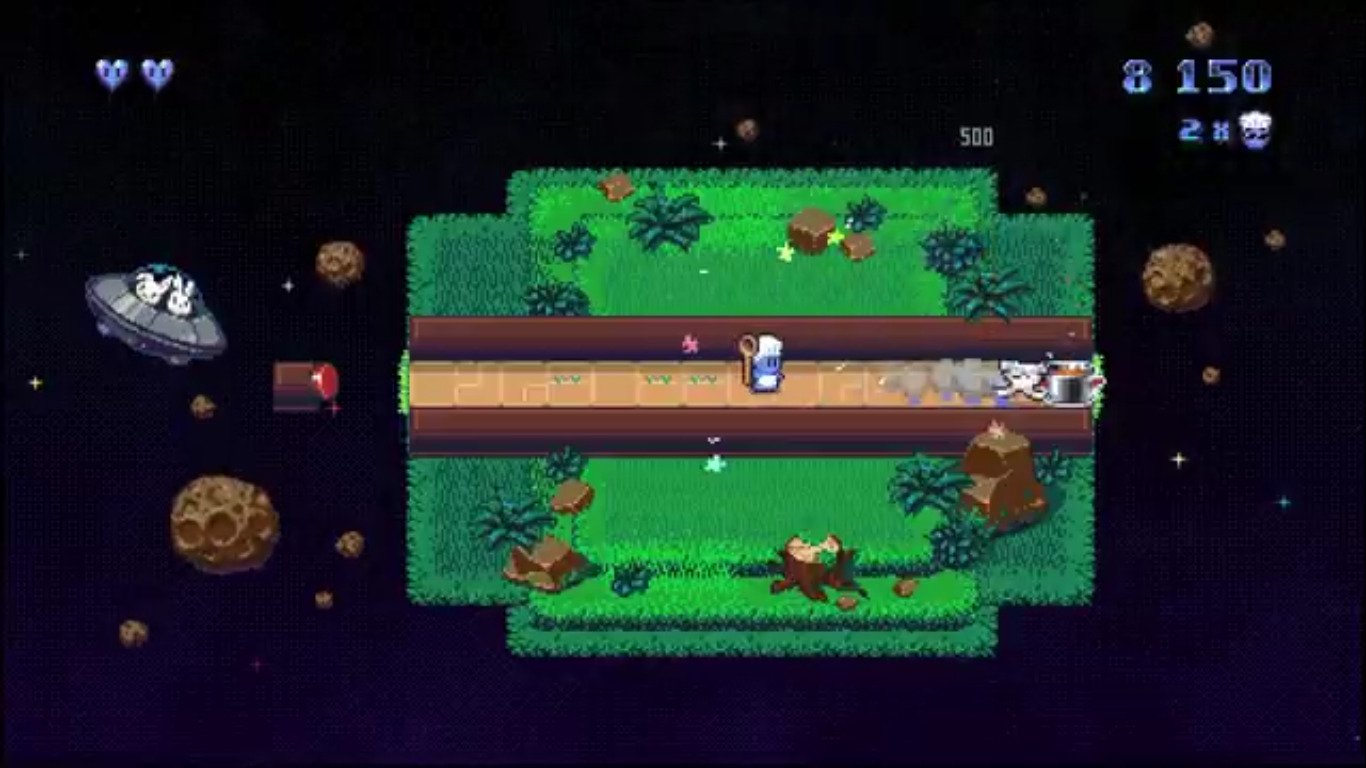 Pugstorm has prepared a brand new trip that will combine rabbits with saucepans. This challenging experience will ask you to save the space chefs by resolving puzzles with tons of different tools, spoons, and more. Bring down the rabbit foes and secure a cooking victory in Radical Rabbit Stew.

This game combines side-scrolling levels with single-screen layouts. Hop into small sessions or defeat the bunnies across the entire world. Each level brings new challenges alongside tons of solutions ranging from weapons, puzzles, to straight-up vehicles.

In Radical Rabbit Stew players take on an action-arcade adventure that features rabbit whacking action mixed with a puzzle experience. Fight in super-sized boss fights as you take on a pixel adventure mixed with a sizzling soundtrack that will only go to push your skills to its limits. This is a game experience meant for perfect new players and 16-bit retro veterans.

There are tons of puzzles and challenges for fans to overcome. As you play through round after round of action, collect gameplay-altering spoons that continue to keep puzzles fun, fresh, and entertaining.

This is a great experience for both intense multiplayer modes along with couch-coop opportunities. Face off in either a complicated battle of light-hearted multiplayer experiences.

Players will find tons of different side-scrolling levels that are filled with rascally rabbits. There is a mixture of both puzzles and boss battles that can all be either binged or experience in small bites.

Explore a vibrant pixel graphic experience that is built to complement both the innate cuteness of the game as well as the entire 16-bit genre. Explore a beautiful world filled with different tributes.

This game features an easy yet challenging experience for anyone who is a fan of traditional arcade platformers. Calling back to the style, and difficulty, of classics like Super Mario Bros, this game is filled with a chance to prove your retro prowess.

So get your spoons ready and whack those rabbits back into the saucepans. It is time to cook up some epic stew with the power of bunnies, strategy, and 16-bit dedication.

Radical Rabbit Stew has been released for Xbox One, PlayStation 4, Nintendo Switch, and PC. Pugstorm has put a ton of love into this title. Fans can buy Radical Rabbit Stew for $15.99 on every platform. Steam users can take advantage of a limited-time discount for 10% off. This discount will run until July 23 as a special promotion for the game’s release.

« Tamar Braxton’s Alleged Suicide Note To Family Is Leaked: ‘The Only Way I See Out Is Death’

Drake And Sophie Brussaux Back Together? – Fans Are Convinced After He Seemingly Shouts Her Out In New Song! »